Going To a Deeper Level

Christian recording star Israel Houghton talks about how prayer and fasting laid the groundwork for his latest album. 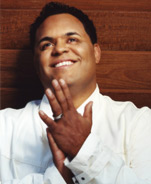 For more than ten years, Israel Houghton and New Breed have been creating ground-breaking worship music that is heard from Texas to South Africa. Their genre transcends categories, falling somewhere between Christian Contemporary and Gospel, but the sound is unmistakable. At its core it is a multicultural ministry experience that borrows from the spirit of Africa, the vibrant energy of South America, and the soul of America. It’s music that touches the innermost being and reflects the group’s attempt to bring hearts closer to God.

Before recording their new album, Israel and New Breed prayed and fasted for 40 days to get to a deeper level in God and to encourage their fans do the same. The band went on a diet excluding sugar, fried foods, and soda; they also limited themselves to six hours of television a week—a real feat for Houghton—and made a concerted effort to spend more time in communion with God. Out of this deep spiritual journey came the chart-topping album “A Deeper Level” and a companion book with the same title. Houghton spoke to Beliefnet about the "Deeper Level" experience, his mild addiction to the television show "24," and his relationship with Lakewood Church pastor Joel Osteen.

Listen to Israel and New Breed:
I Will Search

How did you receive the message from God that fasting was necessary before recording “A Deeper Level?"
Well, it's not the first project we've done where we included fasting. This one was a lot more intense than past ones. We're attempting to say something to the church. I'm a firm believer that it's impossible to take people to a place where you've not gone for yourself.

You fasted from junk food and the media, and took a deeper look at what you spent your time doing. Which of these presented the most challenges to you?
The first three or four days of a fast can be really uncomfortable. But I actually shared in the book how your taste changes. The things that you find savory or that would have made your mouth water before don't, and you find the good taste and the value in some new things.

I swore off watching the show "24," which was heavy for me, you know? But after a while, I lost interest in that and found new passion and interest in other things, the things of God. I realized, "Man, I'm spending tons of time here, 19 hours in one sitting watching this show. It's ridiculous. I'm going to pace myself from here on out.”

Forty days—biblically speaking—is no arbitrary number. Why do you believe the fast was 40 days?

Was there a scripture that guided you through this period?

"Delight yourself in the Lord, and He will give you the desires of your heart." (Psalm 37:4) It was a new take on that in the sense of, not He'll grant you the desires of your heart because that's what you want, but the more you delight yourself in the Lord intentionally and really follow after Him, His desire becomes yours.
How important do you feel that fasting and praying is in the Christian experience?

For us, it was paramount, because of what we were attempting to say. And I think the major obstacles to going to a deeper level—which sounds a lot more complicated than it is—are the distractions of life. So we really set out, intentionally, to address those distractions by focusing on a different reality, and really investing into a consecrated time.

Why do you believe that God is calling people to go to a deeper level?

Well, I think we live in some strange times right now, and I think we have the opportunity before us, for the church to experience her finest hour. What it's going to take is focusing on things beyond ourselves. It's actually simplifying our life, prioritizing the things that matter most, which is our daily walk with God, and establishing a lifestyle, a life of worship.

You mention the "obstacle of busyness" which hinders people from having a genuine relationship with God. How do you advise people to break down this obstacle?

When we think about who God is and what He's done for us, our natural response should not be to struggle at all, but to say, "It's my joy to give the first part of my day, to give the prime cut of my day over to God." And yet, it is a struggle. But wherever your treasure is, that's where your heart is.
How do you connect with God daily?

For me, it's giving first place to God. When I get out of bed, the first thing that hits the floor is my knees. And that's not some kind of super-spiritual thing. It's me knowing that, if my feet hit the ground first, I'm going to be off and running, because I know who I am.

My first focus is giving thanks to God, pausing enough to hear His voice, getting direction for the day, and then spending the currency of the day with real meaning as opposed to just a haphazard musician way of life, which I've done most of my life.
This CD retained the "Alive in South Africa" album's sound and spirit. How much did that trip to South Africa affect your music and your spirituality?
We've been going to South Africa for the last 12 years. And so doing the record there had an incredible effect on us. I love the culture there, I love the sound there, I love the spirit that we've been able to merge with there. From a stylistic standpoint and a lyrical standpoint we're constantly pressing toward keeping things fresh and finding new expressions of what we're trying to say. We have seen real evidence of the music bringing healing in people's lives.

Is there a song on the album that you could barely get through because it was so powerful?

"If Not for Your Grace" is that song on this record. Every time we did it—we did three nights in a row—it just had this incredible response. It evoked so much emotion from the team. Many times we just had to roll with it, and it'd be 20-30 minutes later before we'd be able to do the next song.

"If Not for Your Grace" just speaks, because you look back at great moments, at rough moments, and you just see the hand of grace and the hand of God in it the whole time. That song just basically says, "Where would I be if not for Your grace?"

In the song "Deeper" you ask people to go deeper and ask God for a heart for Africa, Indonesia, and other countries. What does it mean to have a heart for those places?

Well, we're a worship group, so what does that have to do with social justice in the world? I started reading different passages of scriptures that were just undeniable in regards to the connection between worship and justice. And so out of that "Wow, you know, this is connected," feeling came my natural response, which was "I need to write something." With "Deeper," I had this song idea, but I didn't know what the chorus would say. All I really had was the first verse, "Lord, I reach for You. Lead me to Your heart."

So, I started thinking, "Okay, well, the closer I get to His heart, what am I going to hear?" And out of that came that second verse, "Close enough to hear the cadence of our heart beating for the broken."

Do you believe your music has the power to actually heal people?

Well, the hope is that somebody else would answer that positively. In an attempt to remain hopeful and humble, we have seen real evidence of the music bringing healing in people's lives. And our willingness to just back up from the mic and allow God to take over in the form of music has shown itself to be very effective.

So my cautious answer is yes, and my hopeful answer is that we continue to see more of the power of music in worship transforming lives.

You’ve mentioned that you wanted more of a cross-cultural, cross-generational, cross-denominational experience. How important do you believe integrated worship is, considering that Sunday is known as the most segregated day on the calendar?

Everybody kind of has that one thing that drives them. To me, [it’s] to be a part of intentionally breaking down walls that divide us, especially on Sunday. When we get to heaven, we're not going to be sectioned off. It's all of us together. It's one great sound to the Lord. So, if we're praying, "Let Your kingdom come, let Your will be done on earth as it is in Heaven," then I believe His kingdom has a sound. I believe His glory has a sound, and I believe it is much broader and much more expressive than what we've grown accustomed to in our local churches.

As a worship leader at Joel Osteen's Lakewood Church, what has your relationship with Osteen meant to you?

Being a part of Lakewood, being involved with Joel, has been one of those things where it is undeniable that, every time we come together, we are really doing something significant and shaping something.

The bulk of the people who have come to Lakewood in the past seven, eight years are not transplants from other churches, but they're people who have been unchurched or have been away from God for a long time, that heard something in his message of compassion and of love, and came back to Christ. And have the lifestyle now, and have the upgrade, so to speak, to prove that God is so good.

And seeing that happen, seeing that in action, which really flies in the face of a lot of theology I was raised in and understood God to be this kind of taskmaster type of God, has really been debunked by the overwhelming sense of God's grace and His love toward his people.

I listen to all kinds of music. I derive really good, positive messages and musical thoughts from all kinds of music that's not just for the church. Some of it's not even in the church.
I know there are people with very strong opinions about what we should and should not listen to. My thing is this, I'm in the world but not of it, and so I use a lot of caution and conviction in what I allow myself to be influenced by.

Are there secular artists that you would like to work with?

Sure. Jonny Lang is one of those who I got to work with on this record, who for years has been a well-known blues artist. He recently did an inspirational record, but it won a Grammy in the Christian category. When you meet him, you realize he has such a humility about him, such a love for God, but he's not necessarily a Christian artist. But he's got more to say than a lot of my fellow Christians. I have mad respect for him.

I love music from Coldplay. I watch what they do, I hear what they have to say. Some of them are just good love songs, nothing atrocious, nothing is disgusting about what they do. They also have a very heavy social agenda, social awareness, free trade, you know, all of these social issues. And I'm just looking at it going, "Somebody in the church has got to stand up and join this sound." Not emulate what somebody else is doing, but lead the way. That's what the church is called to do.