Emmy Rossum: Staying Away from the 'Celebrity Lifestyle'

The actress talks about how she's avoided the pitfalls of other young stars, the importance of family, and her new album. 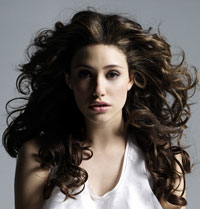 I remember clearly the first moment I heard Emmy Rossum, now 21-years-old, sing in the film version of The Phantom of the Opera. I knew I was listening to an angel and someone truly talented. I have been a fan every since, so when I heard Emmy was releasing a new CD, "Inside Out" (Geffen Records, October 2007), I was thrilled.

With a Golden Globe nomination for her performance as Christine in The Phantom of the Opera and major roles in the big-budget Hollywood motion pictures Mystic River, The Day After Tomorrow, and Poseidon, Rossum has made her name as an actress, but her first love has always been music.

By the age of seven, she was singing with the Metropolitan Opera, performing in more than 20 separate productions in six different languages at Lincoln Cente,r alongside icons such as Placido Domingo and Luciano Pavarotti. Rossum grew up in Manhattan an only child and was raised by her photographer mother. With her mom often traveling, the young Emmy was often left to her own devices, much of the time spent listening to classical music like Vivaldi and jazz piano by John Lewis. That longing for closeness and fear of abandonment can be heard on several songs from the new album, written largely by Rossum with producer Stuart Brawley. It is a showcase for her remarkable vocal range. Emmy talks with Anne Leedom, editor and founder of Parentingbookmark.com about her new music, her life and her dreams for the future.

What are you are hoping to achieve with "Inside Out"?

Inside Out is a departure from the music I am most known for, both musically and in terms of my acting. It isn't going to match what most people expect of me. I can't truly express myself in acting so this project is very exciting—and a little scary. This music is who I am. In the movies, I've always felt like one piece of the puzzle. But this is all me. It's my baby. I get to write, direct and star. And that's the most fulfilling thing. It's everything I've always wanted to do. This music is so close to me. It's something new. You can't categorize it. There are so many layers, up to 150 in some cases. I was able to be creative, experimental and organic in ways I haven't had the opportunity to be in the past. This project is very reflective of my soul and will hopefully define my personal style for years to come.

What kind of audience are you looking to reach?

There is really something for everyone I hope. I think the warmth and the lyrics will appeal to women. The lyrics will also appeal to young women and late teens. Many of the lyrics speak to the transition that late teens and young adults are often going through and that I myself go through. The lyrics deal with trying to find our place in the world. The sound is soft and yet sexy so it should appeal to a wide range of ages and to both men and women.

How has your family encouraged you or influenced you in your career? You are still young and must be coping with tremendous pressures on an ongoing basis.

The number one thing my family has done for me is to keep me grounded. My family isn't actually a musical family at all, so this is new to all of us. I was raised by a single mom so I learned a great deal from her about having a strong work ethic. I also had to take care of myself and learned how to rely on myself. My family is really big on helping me remember what is OK and what is not OK, in terms of behavior and what I wore—all of it. I learned from my family that when I look back on my life, I will be most proud of the kindness, love and loyalty that I expressed over any other kind of success I may enjoy.

How have you stayed clear from so many of the pitfalls that other young stars today fall into?

It is a question of living my life in as normal way as possible. I live in New York so I have far less of an issue with paparazzi. I stay clear of the "celebrity lifestyle" for the most part. I do my own laundry and shopping. I don't go to restaurants where other celebrities and the paparazzi hang out and I don't date celebrities. I live a private and quiet life as much as possible.

How do you handle the public and requests for autographs, etc.?

I am very comfortable with that. I love it when people tell me something I was part of, or something I did, meant something to them. That kind of feedback is very helpful and very rewarding.

What qualities would you say are crucial for parents to instill in their kids who might choose this or some equally challenging profession?

I think that giving kids support and reassurance is really important. There is so much rejection in the world in general and certainly in this profession. My family gave me so much support when I would be upset when I didn't get a part, for example. I was always told that I would be the reason I would succeed or fail. I felt very empowered and I think that is a huge gift to give a child. Parents should teach their kids to be realistic, strong and self reliant. Tough love was a strategy that my mother utilized and it really helped me know where the boundaries were. This helped foster a sense of security in me that is really wonderful. Often I come home and just sit on the couch and watch a movie and have a hug and it is the best. It is the sense of connection to my family and that support that I know that is always there that really helps me stay focused and deal with the pressures and the pitfalls, as well as cope with the success in a positive way.

What is your favorite track on the album?

The single "Slow Me Down." In today's society we move so fast. There is such pressure to succeed and we are all so overscheduled—especially kids. I know that I move so fast. I wrote [the song] because I know that if I don't slow down, I am going to miss what is beautiful in life, whether it is falling in love or watching the seasons change. We all need to slow down so that we see the beauty of life. We all should just take a breath and the world will be a calmer place—and a better place for kids to grow up in.

What are your plans for the future?

I definitely want to do another film. I don't find myself infinitely interesting to write about. I love making films and love playing other characters. This is only the beginning. Phantom of the Opera was a great opportunity to combine both music and film. I hope to have the chance again in another musical, but I do look forward to making more films. I also really look forward to touring and performing my music live. I came from live performance, being part of the Metropolitan Opera. The feedback from the audience is so rewarding and I would love to do that again.