Chloe Agnew of the popular group talks about the healing power of Irish music.

Dublin native Chloë Agnew believes she's the "luckiest 17-year-old in the world." And she just might be. Agnew is part of the hit sensation Celtic Woman, an all-female music ensemble comprised of five Irish artists and and one New Zealander. Coming from a variety of musical traditions, vocalists Agnew, Órla Fallon, Lisa Kelly, Méav Ní Mhaolchatha, Hayley Westenra, and violinist Máiréad Nesbitt make up what Agnew calls "the quintessential Irish woman."

Their debut album "Celtic Woman" reached #1 on Billboard's World Music Chart and stayed there for an astounding 81 weeks. Since then they've released two additonal albums--"A Christmas Celebration" and their latest, "A New Journey"--all of which have reached the #1 spot on that chart, only to be bumped down a spot by the group's newer  albums. Agnew, the youngest member of the group, recently spoke to Beliefnet about the inherent spirituality of Celtic music and the world's interest in Celtic culture. 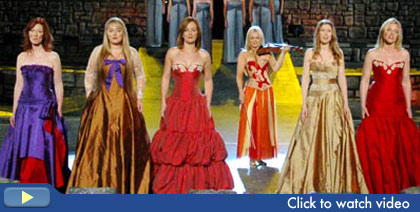 Watch Celtic Woman Perform "The Sky and the Dawn and the Sun" off of "A New Journey: Live at Slane Castle Ireland."

What is the significance of your group's name, Celtic Woman? It sounds really empowering.

It is. A lot of people say, "How come you only went for the singular?" "Why not Celtic Women?" We try to bring something different to the table. The five of us are so different in what we do.  Máiréad Nesbitt is in a field of her own because she's a fiddler--but the other four singers are so different on stage and off.

Each of us brings something so different to the show that [together] we make up today’s modern Irish woman. I think that's what we were going for--the quintessential Irish woman [who is part] classical and traditional, and also part contemporary and modern.

Do you think there's something inherently spiritual about Celtic music?

Yes. Our audiences in

Japan--we were on a tour there last October--called the music spiritual. They actually referred to it as healing. That's very beautiful to hear. You never expect that when you record, sing, or perform a piece that you love, that to somebody else it may be healing, or music for the soul. That, in itself, is a very special and rare gift.

What is lovely for us is that the songs we perform in the show are, 99.9 percent of the time, songs that have a very special meaning to us individually. I know growing up Órla Fallon learned a lot of the songs that she sings on the first DVD, like "Isle of Innisfree," and on the second DVD, like "Newgrange" and "Carrickfergus," from her grandmother. And now, her getting to perform [them] in the show is something fantastic.

For me, the song "The Prayer"--which I recorded on my first and second [solo] albums--is a very beautiful track. Every time I sing [it], I sing it for my mom and my little sister back home, who I know, if they're not with me, are praying for me. It's lovely to hear other people say that [our music] means something very special to them, and that people can find something in our music to help them escape at the end of a busy day.

Do you have any specific stories of a fan telling you that your music touched them spiritually?

Because I'm the youngest in the group and my music appeals more to a younger age group, I get a lot of child and teenager fans. But one girl in particular, whose family came to the show, was abused as a little girl. The minute I read her letter, I just burst out crying. I had to bring her backstage and meet her. She was very badly bullied as a child in school (she's only a little bit younger than me), but she hadn't actually spoken for four years.

Her family was very worried that she living a very sad life. She saw Celtic Woman on TV, and she bought my solo album. She said that when she heard me sing, it inspired her to learn music. The following Sunday she was singing a solo with the local choir in her church. That was just so beautiful to hear.

Her mother said to me, "You'll never know what you've done for my daughter." To hear that brings tears to your eyes. It's just such a beautiful story and makes you appreciate what you do at the end of the day, when all the blood, sweat, and tears don't matter any more. You realize what you're doing is really fantastic, and it's a gift--so you use it to your best potential.

Are people around the world starting to become more interested in Celtic culture and music?

Ireland itself, for such a small little island, has really made its mark all over the world. Obviously that's thanks to fantastic groups like U2, Riverdance, and the legends who've gone before us.

America and PBS opened up a golden gate for us and gave us great support. People were open to a new show like this, something that hadn't been done before. When people see you making it here, they jump on the bandwagon and want a little piece of you.

And it's been fantastic for women. A lot of the people who have gone before us in

Ireland, like U2 and The Chieftains, are all mainly men. For five women to be making their mark in Irish music and Irish history is something fantastic.

Tell me a little bit about your own spiritual life?  Were you raised Catholic or Protestant?

I'm Catholic. I had a Communion and a Confirmation back home in

Ireland. But in my family we very much believe in each other, and that was always the way I was brought up--that family was the most important thing. If [there was] anyone I ever needed to turn to, [it was] my mom or my family back home. They weren't very strictly religious. I'm grateful for that because I was never put under pressure to believe in anything I didn't know myself. To me family will always be number one, and my friends, and where I come from. That's what I believe in and trust--the circle of trust that surrounds you growing up.

Do you incorporate Celtic spiritual traditions into how you practice your faith?

Before we go on [stage] we always bless ourselves three times--just for the last-minute bit of nerves. We just look after each other. It can get so hard when you're away. We're on a five-month tour now, and that's a long time to be away from family and home. It's a bit of a cliché, but it is like a little family on the road. The girls are like sisters to me now.

When you and the girls bless yourselves before going onstage, do you say a specific prayer or more of a traditional Irish blessing?

I always bless myself and [say], "God, let me have a good show." [And I pray] that the last-minute nerves don't kick in too hard. And every time I get on a plane I bless myself, and I say a little prayer that I have a safe journey. And I wish that my family back home is safe. I'm always thinking about them before I take off. I bless myself when I land, just to thank [God] that we had a safe journey, to look after us, and make sure our travels are always safe and easy.

Have the people of

Yes. Irish music was bred into us from the day we are born. Looking back to our ancestors and our heritage, it was always in our culture. Even through the hardest of times Irish people always turned to music. They have a song for everything--for drinking, for depression, for famine. I remember a song growing up that was for milking the cows.

Music is so important to Irish people. [We] almost always play an instrument, or sing, or dance. But I think that within the last few years, because of the Celtic Tiger [the period of rapid economic growth in

Ireland from the 1990s to early 2000s], there's been such a boom. For such a small island we've really made our mark all over the world. St. Patrick's Day in Ireland is celebrated very much as a religious day. But thanks to the rest of the world, it has latched onto parades and things like that. So now we celebrate with a parade, but we don't go dying our rivers green! But I know a lot of parts inIreland still celebrate it very much as a holy day. So it just depends on the culture and the upbringing in the family.

My mom. She really is the absolute role model for me. She did the exact same thing at my age: She toured with an Irish girl group in the States, and she went on to bigger and greater things. She really is an absolute inspiration.

In the world we're living in today you just have to be blessed for the opportunities you get. At 17--to say that I'm doing something as amazing as Celtic Woman and getting to travel and meet so many wonderful people and see so many great places--I feel like I'm the luckiest 17-year-old in the world.

I think that inspires me to be grateful for what I have, to make the most of it, and to remind myself that opportunities like this don't come along every day. I think that's what keeps us grounded. I was brought up in a house where we were always reminded of how lucky we were to have anything. We were never spoiled when growing up. [The girls and I] were only saying the other day,

Ireland in the '80s and '90s was kind of still a poor enough country. And that was bred into us by our family. I remember my grandmother always saying to me, "Be grateful for what you have."

What's the best piece of advice you've ever received?

My grandfather and my mother taught me the saying, "To whom much is given, much is expected of." That has always stuck with me. Just remember how lucky you are for everything you have.