Tuning In to the Voice of God

This article was originally featured on Beliefnet in 2006.

Who says Christian music has to be somber? Rebecca St. James has been making danceable Christian pop/rock for more than 16 years in the belief that a biblical message and a rockin' beat aren't mutually exclusive. The Australia native recently won the "Best Female Artist of 2006" Reader's Choice Award from ChristianityToday.com, co-hosted the Gospel Music Awards last year with gospel great Kirk Franklin, and was a spokesperson to the White House's National Day of Prayer. Currently, she's preparing to launch SHE events (Safe, Healthy, Empowered) in Australia and New Zealand, based on her books, which aim to empower women to live Christian lives according to biblical principles.

St. James recently spoke with Beliefnet about poverty in Africa, sexuality in mainstream music, what she wants to change about Christian music, and the importance of abstinence. 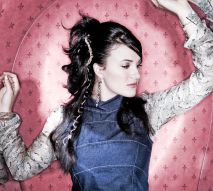 You're a spokesperson for Compassion International and have spoken out about poverty in . What do you think about the increased celebrity interest in , with Angelina Jolie and Brad Pitt and Madonna in the news? Is it is a sincere interest?
I can’t judge other people’s intentions or motives or [explain] why there’s this interest. I do think that celebrities adopting from places in are helping to give the rest of the public an idea as to what’s going on over there. I love what Bono is doing and his passion for and for the people who are hurting there. The end result is that people are finding out about the needs there, and I hope that will encourage people to reach out and bring hope to the hurting people in .