The popular Christian band calls it quits after 15 years of being 'loud and bold and crazy for God.' 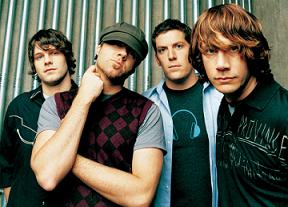 Though they started out as nothing more than a college band playing summer gigs in Kentucky, contemporary Christian music group Audio Adrenaline has become one of the most successful and enduring Christian rock bands. The band has stayed together--with a few member changes here and there--for 15 years. During that time, Audio Adrenaline has produced several #1 hit songs, while winning four Dove Awards and two Grammys. But now, the members of Audio Adrenaline have decided it is time to take their final bow, with the release of their greatest-hits CD "Adios," a new book entitled "Hands and Feet: Inspiring Stories and Firsthand Accounts of God Saving Lives," and a 40-city farewell tour with fellow Christian band MercyMe.

One of the band's original members, Will McGinniss, talked with Beliefnet from the road about the very personal reasons behind the band's decision to fold, the legacy of Audio Adrenaline's music, and what the future holds for each of the band members.

Is Audio Adrenaline going to do anything special for their final concert this year?

We will do a blow-out concert on New Year's Eve. That show will be the last show we do. But we'd also like to do a Hawaiian excursion right after that with family, friends, and fans. I don't know if we will be able to work out the details or not, but we thought it would be great to invite some of our fans to Hawaii to surf, snorkel, hang out. It would make for some fantastic memories for us and our fans.

Discuss the process you and the other band members went through in deciding to disband Audio Adrenaline.

Three years ago, Mark's [founding member and lead vocalist Mark Stuart's] voice was deteriorating, and he was taking steroid shots, but they weren't helping that much. Recording was very difficult for Mark because recording demands that you be pitch-perfect over and over again in the studio.

Finally, last November, the doctors told Mark they couldn't fix the problem. They said the only way to heal his voice was to completely rest it for a year-and-a-half straight. So we discussed as a group whether or not we should replace Mark with a new band member. But we felt it would change the group too much, and something unique to Audio Adrenaline would be missing. I have been playing music with Mark for 20 years, so I knew I didn't want to be without Mark on the road. So we decided that this was God's timing and we needed to come to an end as a band and take a leap of faith to see what he had for us next.

On "Adios," there are only two new songs, "Blaze of Glory" and "Goodbye." How do these songs sum up the career of Audio Adrenaline?

With "Goodbye," Tyler [guitarist and keyboardist Tyler Burkum], wrote it for the rest of us in the band as a personal goodbye, but then we realized it could be used for our fans as well. The song is a real a tearjerker for us because we have amazing fans. Our fans didn't buy into a fad, but we feel like they saw into our hearts and they have stuck with us over the years in an incredible way.

With "Blaze of Glory," we wanted to write a song about going out in a big way. As a band, we didn't want to fade into nothingness. We have never been afraid of being loud and bold and crazy for God. That's what we want our fans to remember about us.

After all these years, perhaps the most recognized Audio Adrenaline song still is "Big House," which came out more than a decade ago. What is the history of that song?

The truth is that song almost didn't make it into the recording studio. It was Mark's dad who actually heard the song and said, "You have to put that on the record because it will be a hit." Mark got the idea for the song while in Haiti in 1993. It's based on a chorus he used to hear some of the children there sing. So Mark started thinking about a way to express heaven that was accessible and fun and made heaven seem like a place you would want to go--something that didn't have the usual images of harps and angels and fluffy clouds.

And now it's a little funny to us that the song has taken on a life of its own in youth groups all over America. There are kids who know that song, and don't even know it's our song. They hear it at one of our concerts and wonder how we know that song, because they think it is just a song their youth pastor made up and would sing on retreats and stuff.

For you personally, what will be the most difficult aspect of seeing this chapter of your life come to a close?

Even though all of us will still see each other and keep in touch, I think what I am going to miss the most is being on the bus or on a plane with these guys every day. There are always special moments where we are having a conversation before a show or we are praying together where God really speaks to me.
Is there anything creatively that you feel the group as a whole didn't have a chance to do?

I am sure I could think about it and nitpick on a few things I wish we could have done, but I feel like that would show a lack of gratitude for everything we have had a chance to do.

Have you ever wished that Audio Adrenaline would have crossed over into the mainstream music arena and had more influence there?

No. I've always felt like whatever platform we had to sing about God was the platform God has given us, and I didn't need to go chasing after something more--which is not to say that's what other Christian bands have done that. I'm just saying that as a band we've tried to stay content.

What are the future plans for each member of the band?

Mark and I will be working with a record company, Flicker, through Sony/BMG music. Tyler is thinking about a solo career. Ben [drummer Ben Cissell] is going to be working with Rocketown Records on some special promotional events. I think we will all be using some of our existing talents and strengths, while being challenged to grow in some new ways, which is exciting.

Looking back on how Christian music has evolved over the years, how do you feel about the future of Christian music? Is it becoming more and more culturally relevant or irrelevant?

But I also don't think Christian music is culturally irrelevant in the sense that I think many groups are striving to produce excellent music that authentically reflects the human condition and our need for God. I believe people will always need to hear that message, whether it is at a Christian music festival or in a concert at Madison Square Garden.

Offstage, the band has become involved in mission work by starting the Hands and Feet Project. What are the goals of the project and how can Christian music fans become involved?

The Hands and Feet Project was born out of the band's visits to Haiti. We have a real heart for that country and the people there who are struggling in what is often referred to as "Fourth World" conditions. In 2004, we committed to building an orphanage there. Nearly half of that country's population is under the age of fourteen, and many of those children are orphans. Now we are actually building an entire village to house children of all ages.

So the short-term goal for the Hands and Feet Project is to continue to build this children's village in Haiti. We are helping build it from the ground up. We are building homes for infants, and then for older orphans. We have encouraged our fans to bring their church groups down to Haiti for short-term missions trips to work in helping us construct this village. And on some of these trips, some of the band will also be down there working alongside them. It's a way for us to partner with our fans in something we believe will have spiritual impact on many lives.

The long-term goal of the project is to connect other Christian bands with their fans so they can unite to do mission work in a country they feel passionately about serving. We already have a couple of bands interested in doing a project like we are doing in Haiti, but doing it in other countries like India, for example.

Besides the Hands and Feet Project, what do you think the musical and spiritual legacy of this band will be?

It's hard for me to say. I think it is for other people to decide individually what the band meant. I hope people think of us as honest and real. I hope fans saw that our friendship as a band was something special. And maybe that we weren't the best band or the most talented musicians, but we used everything we were given to serve God.