Leonard Cohen: Prophet of Our Times

Faith imbues the work of this artist, who was influenced by synagogue liturgy and recently spent time in a Buddhist monastery. 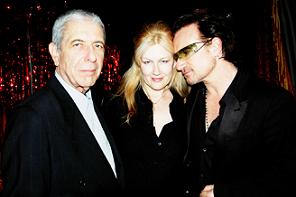 Leonard Cohen (left), film director Lian Lunson, and Bono.
Credit: Brit Marling.
It is said, according to Jewish tradition, that the age of prophets has come to an end. God, having withdrawn from the world, has also withdrawn his voice, leaving humans to stumble along in the dark, bereft of guidance. Notwithstanding these facts, it seems safe to call Leonard Cohen a prophet for the modern world. Cohen, the Canadian-born singer-songwriter who has achieved legendary status for songs like "Bird on a Wire," "Everybody Knows," and "Suzanne," knows it too, making reference to his own chosenness in the career-summing "Tower of Song": "I was born like this/ I had no choice/ I was born with the gift of a golden voice." Cohen, now the subject of a worshipful documentary, "Leonard Cohen: I'm Your Man," may be playfully poking fun at his own image with these lyrics and his anything-but-golden voice, but he is also reflecting his own vision of his career as a singer and a writer--that he has been chosen to perform, and to inform. Cohen has become a quasi-legendary rebel figure, the songwriter as effortlessly hip social critic and professor of love, and his legend has only grown with the passage of time and the trickling of Cohen songs--like "Hallelujah" and "I'm Your Man"--into the pantheon of classic American song. As "I'm Your Man" informs us, Cohen's immersion in religiosity began with his childhood in Montreal, then a Catholic-dominated city where priests and nuns were comfortably familiar presences. Cohen describes his first exposure to poetry as the synagogue liturgy and the Bible stories he read. His later work reflects these influences; outside of possibly Bob Dylan and Stevie Wonder, Cohen's songs are the most religion-inflected of any major songwriter of the last 40 years.

Cohen's influences are not only religion itself; his work is also the product of immersion in the religion-obsessed work of other artists. It is no accident that one of Cohen's early albums is called "Songs of Love and Hate"--a deliberate echo of William Blake's famous "Songs of Innocence and Experience." Cohen makes love into a religion, worshipping at the shrine of the Suzannes and Mariannes that populate his songs, but the real action is to be found in his songs of doom and terror. If Cohen is a prophet, he is Isaiah, bringing news of degradation, dishonor, and death, unrestrained by those who refuse to listen or refuse to hear.

"Leonard Cohen: I'm Your Man" pays homage to Cohen's prophetic stature (U2 guitarist The Edge describes him as possessing "biblical authority"), but the best place to turn for a fuller understanding of Cohen's work is not the film's overly respectful covers (by performers like Nick Cave, Rufus Wainwright, and Antony), but the songs themselves.

To begin with, Cohen's voice is itself an authoritative instrument. Golden it may not be, but its low, raspy rattle, teetering on the edge of utter tunelessness, is the sound of truth exposed in a wilderness of falsehood. The traditional Cohen song, in its primal state, sets Cohen's speak-singing against the ethereal voices of his female backup singers and the careful, assured picking of guitars. Cohen's prophecy is of impending doom, clothed only in the garb of his formal, biblically tinged language. His subject matter ranges from the purely spiritual to the political, but the result remains the same, especially in his later, gloomier iteration: irreversible chaos and death.

Walter Benjamin once remarked that the storyteller is defined by his wielding that most precious wisdom--the knowledge of death. By that reckoning, Cohen is the prophet as storyteller, his authority stemming from the confidence of his poetry, and his voice. "There's a mighty judgment coming/ but I might be wrong," Cohen sings on "Tower of Song" (1988), but by the time of "The Future" (1992), all doubt has been removed. "Things are going to slide, slide in all directions/ Won't be nothing/ Nothing you can measure anymore/ The blizzard, the blizzard of the world/ has crossed the threshold /and it has overturned/ the order of the soul."

The vision of the future is so bleak, detailed as it is in Cohen's precise, lengthy lyric, that the demons of the past come to seem preferable in comparison: "Give me back the Berlin wall/ give me Stalin and St. Paul/ I've seen the future, brother:/ it is murder." "The Future" is an update of the Book of Revelations for the post-Soviet era of moral confusion.
Cohen has been a bard of death for as long as he has been a singer; "Story of Isaac" (1969) recasts Abraham's attempted sacrifice of his son as a Vietnam-era parable, and "Who by Fire" (1974) coolly updates the most chilling prayer in the Jewish High Holiday liturgy, its lyrics a carefully composed list of potential modes of death with a half-buried grenade for a chorus, tossed in God's direction: "And who shall I say is calling?" Cohen is a prophet after the era of prophecy, and when God calls, the line buzzes, but no one speaks on the other end.

What is left, in the place of true spiritual intimacy with God, is the pursuit of some higher truth, and interminable waiting. He's "Waiting for the Miracle," as one of his songs describes it, and his lyrics portray the purgatorial limbo in which he finds himself while doing so: "Ah I don't believe you'd like it/ You wouldn't like it here/ There ain't no entertainment/ and the judgments are severe/ The Maestro says it's Mozart/ but it sounds like bubble gum/ when you're waiting for the miracle/ for the miracle to come." Cohen has always been a spiritual seeker in addition to an end-of-times pessimist, a fact reflected in the mingled Jewish, Christian, and Buddhist references in his lyrics as well as his own time spent, in recent years, in a Buddhist monastery.

Perhaps no song so perfectly summarizes his mordant take on matters religious, his mingling of the sacred and profane--of love, sex, and spiritual hunger--as his "Hallelujah" (1985), famously covered by Jeff Buckley, and memorably featured everywhere from "Shrek" to "The West Wing" in recent years.

Echoing the Bible--and, buried deeper in the song's DNA, the Hasidic rabbis who once possessed the means of indirectly contacting God--"Hallelujah" begins with what is lost: "I heard there was a secret chord/ that David played and it pleased the Lord/ but you don't really care for music, do ya?" King David's love affair with Bathsheba, source of his most significant sin, is mingled with that of Samson, whose love for Delilah costs him his hair, source of all his strength. The once-ringing "hallelujah" of deep faith and profound dedication has become a "cold and broken hallelujah," and the glories of love have become ugliness and degradation.

But for Cohen, who would later describe his profession as "paying my rent every day at the tower of song," this is not all. "There is a crack, a crack/ in everything/ that's how the light gets in," Cohen sings in "Anthem." Similarly, as he says in "Hallelujah," there is a crack in language itself that allows the light in, and it no longer matters where we stand in the procession of history: "There's a blaze of light/ in every word/ It doesn't matter which you heard/ The holy or the broken Hallelujah."

As the female chorus' gospel-like Hallelujahs ring out, Cohen submits his final word on his profession, and his calling, declaring both its futility and its utter necessity: "I've told the truth, I didn't come to fool you/ And even though/ it all went wrong/ I'll stand before the Lord of Song/ With nothing on my tongue but Hallelujah."

In an era without prophets, Cohen is a prophet without honor, his only clothing the unshakeable belief that when he pleads with God (in the song "If It Be Your Will") that "If it be your will/ To let me sing," God will respond, "You must sing."