'There's No Place I'd Rather Be'

How does MercyMe avoid temptation on the road? And who are the three people Bart Millard wants to meet in life?

After more than 12 years together, MercyMe is still facing challenges of traveling on the road and receiving praise for "I Can Only Imagine," the hit single that exploded them onto secular radio. Here, lead singer Bart Millard opens up about meeting Billy Graham and how his band keeps each other accountable as devoted Christians. Look for MercyMe's latest album, "Coming Up to Breathe" in stores starting April 25.

I saw you and MercyMe perform at the Billy Graham Crusade last summer in New York. What was it like to play at the festival and to meet Billy Graham?

The first time we played at a crusade, in Kansas City, was also the first time we met Dr. Graham.  There are three people I have always wanted to meet in life and he’s definitely one of them.  It was a dream come true.  Dr. Graham was really, really sincere and as sweet as can be. I was awestruck because he's just an amazing man of God.

You mentioned three people you wanted to meet in your life. Who are the other two and why?

The other two are Bono and Bill Cosby. Bono, because I’m just a huge, huge, huge U2 fan, and I think Bill Cosby’s one of the funniest people on earth.

I remember the first time I heard “I Can Only Imagine” on the radio. I was struck by how the song mentioned “Jesus” in a way that was loving and not as an expletive. Why do you think the song climbed through the charts of secular radio so quickly?

When you figure that one out, let me know because all logic says it shouldn’t have happened. When the popularity took place, we were just as shocked as everybody else, and even more shocked when secular radio stations continued to play our songs. We never tried to hide what we believed. If people asked us about it, we would talk about it.  The amazing thing was, we would meet DJs at mainstream stations who would say, ‘You know, I’m a believer.’ I hope that people are yearning for God.

When MercyMe first began, what were the goals of the band? Have you achieved them?

Our biggest goal was to be obedient to God's calling, which was to usher people into his throne room.  Our definition of worship has broadened over the years. What I view as worship now is certainly a little different than how I used to view worship. I don’t see it as a verse in a chorus, on a big screen with words, like I used to. It’s just trying to be as real as possible in front of an audience. 12 years ago all I wanted to do was sing the right songs and get emotionally wound up, but now I realize my job is to make Christ the center of attention each night.

Do you ever feel there’s pressure to stay Christian and popular at the same time?

No, not for me. It’s never been an issue. The popularity’s got its pluses and minuses, and there are many days that I would rather just be a Christian and not known at all, but that’s not what God has called me to do. As Christians, we're supposed to share the Gospel in every corner of the globe.  Being a Christian consumes every bit of my heart.  For me, it's just impossible not to be a Christian; it becomes a lifestyle.

Do you feel other Christian bands have watered down their message? Are there things they are doing right or wrong?

I’ve never met an artist who was at a certain level of spirituality offstage and then lowered it onstage. I’ve gotten a million questions about Switchfoot, about whether they’re watering down their message. I don’t see them watering down anything. They’re believers; there’s no doubt in my mind. They’re still who they were in the first place. Whenever a Christian artist goes mainstream, people want them to be our new martyr or poster child or to be exactly what we think they should be.

As long as they’re trying to honor the heart of God and advance the kingdom of God, God is much bigger than our opinions. There’s a reason that God has me in front of a MercyMe audience and not a Switchfoot or a Jars of Clay audience. You just have to believe God has them in the place they’re supposed to be.

What are some of the challenges and temptations that you or MercyMe have encountered on the road? How do you keep each other accountable in your faith?

One of the things that has challenged us has been not to be complacent. It’s easy to do the same thing day in and day out. I think artistically, creatively, even from a ministry standpoint, you have to make an effort to stretch yourself and to grow. I think there are artists who make the mistake of thinking time spent on stage is the equivalent of increasing spirituality.  It’s as if the busier we are, the more godly we can be, which is just so far from the truth. Everything we do as a band is an overflow of our personal relationship with Christ.  We're like pistons firing together.

The great thing about accountability on the road with six guys is we become family—you never get too far without somebody calling you out. I’d rather be in a band than be a solo artist. I can’t imagine what the temptations would be, but I know what my weaknesses are, and I know it’s definitely a great thing to have a group of people holding me accountable every second of the day. One temptation is having the desire to quit, to go home, and to be with our families.  This is not necessarily a bad temptation, but it can drain the life out of anyone. Also, trying to avoid making everything just a job and not God-centered ministry is tough.

Are there times you wish you weren’t part of this band and that you were just leading worship at church?

Oh sure. There are a lot of times I wish I was just leading worship somewhere, but the grass is always greener at some point. The hard part about being the singer is that if any of the band guys missed a show, they can be replaced, but if any lead singer misses a show, the show can’t go on. I’ve struggled with this burden for years. Our original bass player left and I was really jealous because I knew that if I left, the band would fall apart, and it’s just a bigger responsibility to struggle with. Before we signed the record deal, I went through a phase of rebellious attitude where I wished that I could walk away. But God’s really been faithful in allowing me to be comfortable again. There’s really no place I’d rather be than what I’m doing right now. It’s been an amazing journey, and instead of asking, ‘Why am I part of this?,' I am really grateful that I can be part of it. What would you say to those who don’t believe in Christ or may not have found a faith to ground themselves in?

What is your favorite prayer?

My favorite prayer would be “Bless this food.” (laughs)  I’m kidding. What I pray most consistently is for my family to be safe and for God to move in my life, whether I’m onstage or offstage, and to have a ministry of integrity. 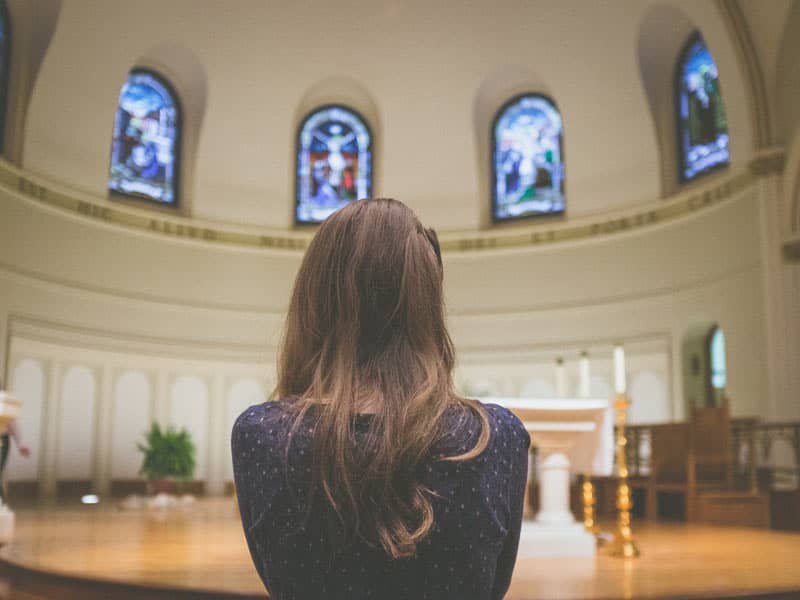 Is Your Church Headed Toward Progressive Christianity?