Building Bridges From Teens to God

Christian rock band Building 429 helps their young audience understand that it's OK not to be perfect. 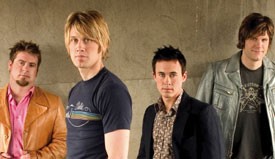 Believe it or not, there are musicians out there making Christian albums that take full advantage of your car's sound system, bass and all, while still preaching a message more wholesome than 50 Cent. The stereotype of Christian music as goody-goody has been shattered by bands that write lyrics about the realities of living a Christian life-the ups and the downs.

The first time I listened to the Christian rock band Building 429's debut album, I was in awe of how their lyrics seemed to echo the thoughts running through my own head. Many times Christian artists paint such a perfect picture of a life with God that the listener ends up feeling like a failure. However, Building 429 doesn't sugarcoat things. Their music makes you feel less alone in this crazy walk, and it can't help moving you, a task that should be the goal of anyone speaking God's message.

I spoke with the band after a show in Worcester, Mass., and found they were just as approachable in person as they are on a recorded track. Their first single "Glory Defined" hit #1 on Christian Hits Radio charts and stayed at the top of Christian Radio Weekly's Adult Contemporary chart for 10 consecutive weeks-a spot it claimed faster than any single in the publication's history. They've played with the likes of Jeremy Camp and are currently on tour with Tree63. At this week's Gospel Music Association Awards, they won New Artist of the Year, and were nominated in two other categories--Song of the Year and Rock/Contemporary Song of the Year.

Jason Roy, Building 429's lead singer, explained the band's name. "We were involved with a Christian youth group that had this thing called `The 4:29 challenge.' When someone said something bad about someone else, they'd be reminded of Ephesians 4:29, which says `Do not let any unwholesome talk come out of your mouths, but only what is helpful for building others up according to their needs, that it may benefit those who listen.' We as a band want to spread this message."

As guitarist, Paul Bowden put it, "When you're more aware of what you're saying, then the people around you begin to notice a difference."

Building 429's five members-Jason Roy, Paul Bowden, Scotty Beshears, Michael Anderson, and Jesse Garcia-are completely down to earth. They say they're not after fame and fortune, and that they don't make music to satisfy their own desires. They're just following the path that God has laid out for them. It shows.

The band members are fully present in the moment and seem genuinely excited to share their music in front of any crowd that will come out to see them. Just before they went on stage, they appeared calm and centered-and completely focused on the show that night. It didn't matter if the venue was smaller than they might be used to, or if the New England crowd was less lively than those in the South-they performed to the best of their abilty. I was struck by how much energy and thought was put into every song. As a member of the audience you could feel that their message was sincere, and their excitement contagious.

The members of Building 429 serve as great role models, but don't try to put them up on a pedestal. "Because we're in a Christian market people analyze what we say and what we do. So you walk a tight wire every second that you're on," says Roy. "Not that we didn't ask for that. We asked to be put in a position where God could use us. But that's probably the toughest thing we have to deal with-being expected to be perfect-and we're not!"

As their success has grown, the members of Building 429 are spending more and more time on the road. They are constantly facing new challenges-dealing with the pressures popularity brings and the strain of representing not only themselves but their faith.

"The hardest thing about touring is that even before you go on stage, you're already on stage," says Roy. "If you're having a bad day and you act rude to one person, you have to be worried that you could be perceived as a rock star and an arrogant jerk.

The band members say they identify with their teenage fans because they are dealing with the same types of issues, insecurities, and predicaments, the same obstacles when it comes to their relationship with God. Their music acknowledges that following Christ isn't always easy-that many times you screw up and that's OK-God always gives you another chance. The first few lines of the track "Space In Between Us," shows this perfectly: "Look at my heart again/ Look at the mess I've got it in/ I'm trying to trust in You/ To know that you'll see me through"

"I think that's true about our songs, that when you take the style and artist out of the picture and you just break it down to the lyrics, it's there," says Scotty Beshears. "We try to be honest about our own lives, and I think people can relate to that."

In "All You Ask of Me," from their first album, "Glory Defined," the lyrics are an anthem for young people trying to follow Christ. "Somehow I always seem to do the very thing I hate /And I can't find the strength to change/Feels like I'm getting in your way/And now I'm living with the pain/Of knowing that I let you down." The message to teens like me, struggling with their faith, is that they aren't the only ones who fail over and over.

"No one has it all together," says Roy, "Even when you know God, you make mistakes. We're always happy when a song comes out that can affect people in a positive way."

Although Building 429 has a young audience, don't expect to hear them on your top-forty radio station anytime soon. They respect bands such as Switchfoot and Lifehouse who have crossed over to mainstream pop, but they don't feel ambitious about making the transition themselves.

"If that door opens we will pray extremely hard about it and make the best decision," says Beshears. "There are two ways to look at it. Number one, we're selling out Christ and we're going mainstream. Number two, we're becoming the hands and feet of Christ and going mainstream, living our faith. But if we ever get that opportunity, we're not going to change."

Even though they don't hold mainstream fame as a goal, they would like to reach more listeners. "The more that you're selling your work," says Beshears "the more people are hearing it and the more of an opportunity you're going to have to tell them about God. When you stop doing that, that's when you start having problems"

Building 429 is also using their platform to promote causes they believe in, such as World Vision, an organization that provides resources that improve the quality of life in Third World countries. During their concerts you can often find a representative from this organization collecting donations and distributing materials. They sometimes use their place on stage as a forum for causes like this, which they feel passionate about.

I've found Building 429 to be a breath of fresh air-performers who have kept open hearts and minds as they travel around the country connecting with teens. They make music that is not only inspiring but entertaining. As one teen concert-goer said, "This band really speaks to me. They are singing about everything I am going through on my level. They don't preach to me like they have all the answers, but rather they're depicting the same feelings I have in my heart.