Beliefnet
This article first ran on Beliefnet in February of 2001.

"Ah, I always take you to the most glamorous places," said Bono with a laugh, as he hugged me in greeting one afternoon in September of 1999. He was being ironic, of course. I'd jetted around the United Kingdom with the band U2--a galvanizing force on the popular music scene for more than two decades--as I'd covered the group for Rolling Stone and other publications. That September, however, we were meeting in a completely nondescript conference room in Washington, D.C., and Bono was about to address a conference on the plight of highly indebted poor countries.

Now, a year and a half later, most people who care are familiar with the extensive, hands-on work Bono has done with the Jubilee 2000 coalition to have the world's richest nations forgive the onerous debts of the most impoverished ones.

Bono got involved partly to complete the work begun by the Band Aid and Live Aid events back in the '80s; partly to find a dignified, compassionate way to mark the new millennium; and partly out of his own spiritual convictions. In many ways, that last motivation intrigued me the most. In his debt-relief efforts, Bono did not travel the typical celebrity route of writing out checks or performing benefit concerts. Instead, he was meeting incessantly with politicians, bureaucrats, and world leaders--often behind the scenes--to lobby for legislation.

It's one thing to confer with Pope John Paul II, former President Clinton, British Prime Minister Tony Blair, or even conservative senators like Jesse Helms and Orrin Hatch. It's quite another to sit for hour after hour with the under-secretary of this-and-that or academic economists or World Bank functionaries, as Bono did--that's the labor of a true man of faith. "I never thought it would get this unhip," he complained to me at one point.

So when Beliefnet approached me about interviewing Bono on his work for debt relief and its relation to his spiritual life, I figured it wouldn't hurt to ask him. After all, religion is hardly an abstract issue for anyone raised in Ireland. Now 40, Bono was born in Dublin, the product of a mixed Catholic-Protestant background. While his lyrics and U2's music have always been suffused with an undeniable spiritual consciousness, Bono and the other band members have stringently resisted being claimed by either religious or political side in Ireland's ongoing "troubles." While informing every aspect of what he does--"God bless" is even his standard telephone sign-off--faith has never been a subject Bono has approached with much ease.

U2 is busy rehearsing for its upcoming world tour, but Bono decided to take a short break--and a genuine leap of faith. 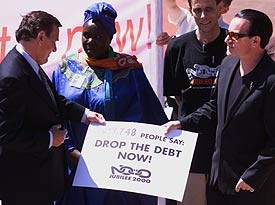 "I've successfully avoided talking about my faith for 20 years," he said after we completed this interview, which he did by phone from Ireland. "But with you, I felt I had to. I said, 'I can't turn this guy down--he's been on every blinkin' boring story!' And I thought to myself, it's OK to open up a little bit. The problem is, when I do these kinds of things, the way it turns out in the tabloid papers here and in England is, 'Bono Pontificates on the Holy Trinity.' And then we're off! But at the same time, I can't let them gag me. These are the unformed, unfocused thoughts of a student of these things, not a master."

While the Jubilee 2000 Coalition accomplished a great deal, it failed to achieve its ultimate goal of complete debt forgiveness. The coalition has disbanded, but the work goes on. What is the current initiative, and what is your involvement in it?

This year might turn out to be even more of a millennium year for us than last year. There's a chance that if we focus on the HIV/AIDS crisis, particularly in Africa--that's the shock to the system that might allow for deeper debt relief.

I've had two meetings with Tony Blair in the last few weeks, and he realizes that he is in power at a time of great importance. This is akin to the bubonic plague or Hiroshima or the Holocaust. I think he is going to, along with your new president, work with the industrialized nations and the African leadership to really have a go at this problem. And debt relief will be part of that package.

Do you have the same level of rapport with the Bush administration as you did with Clinton?

Yes. In fact, if you look at the cover of The New York Times when debt cancellation went through [Congress], the headline was--and for me it was an amusing triumvirate--"The Pope, U2 and George W. Prevail." We worked very hard to get both Republican and Democratic authorship on that package, and I'm confident the Republican leadership will follow through. In the second debate, [Bush] mentioned debt cancellation as one of the ideas he was excited by.

Because debt relief became a religious issue, you were able to meet with many politicians with whom you probably agree on nothing else. What was that like?

I really have had to swallow my own prejudice at times. Because I was suspicious of the traditional Christian church, I tended to tar them all with the same brush. That was a mistake, because there are righteous people working in a whole rainbow of belief systems--from Hasidic Jews to right-wing Bible Belters to charismatic Catholics.

We had a meeting in the White House, and President Clinton invited Pat Robertson, who I think had referred to him as "a devil" and hadn't visited the White House in eight years. I saw him in the room with Andrew Young, who said, his voice trembling, that this is the most important thing that's come up for him since the civil rights marches in the '60s. Clinton said, "This is a very odd bunch of people. But if you guys could agree to meet a few more times, you could really change the world."

I'm actually starting to like more and more people who have convictions that are unpopular. Now at what point does an unpopular conviction interfere with your own human rights? Forced female circumcision, for instance. The Catholic Church's stance on contraception. The list goes on. You know, God has some really weird kids, and I find it hard to be in their company most of the time.

When I went to meet the pope, I brought a book of Seamus Heaney's poetry, which he had inscribed for the pontiff. The inscription was a quote from [Heaney's] catechism, from 1947. It said, "Q: Who is my neighbor? A: All of mankind."

Now, for all its failings and its perversions over the last 2,000 years--and as much as every exponent of this faith has attempted to dodge this idea--it is unarguably the central tenet of Christianity: that everybody is equal in God's eyes. So you cannot, as a Christian, walk away from Africa. America will be judged by God if, in its plenty, it crosses the road from 23 million people suffering from HIV, the leprosy of the day. What's up on trial here is Christianity itself. You cannot walk away from this and call yourself a Christian and sit in power. Distance does not decide who is your brother and who is not. The church is going to have to become the conscience of the free market if it's to have any meaning in this world--and stop being its apologist. 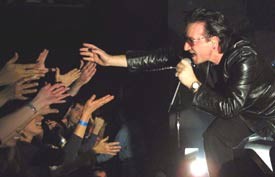 During U2's Zooropa tour, you would often call prominent figures by phone from the stage. In London, you were dressed as the devil character you invented, MacPhisto, and, as you tried to call the Archbishop of Canterbury, MacPhisto remarked that religious leaders were some of his closest friends. It's true. I often wonder if religion is the enemy of God. It's almost like religion is what happens when the Spirit has left the building. God's Spirit moves through us and the world at a pace that can never be constricted by any one religious paradigm. I love that. You know, it says somewhere in the scriptures that the Spirit moves like a wind--no one knows where it's come from or where it's going. The Spirit is described in the Holy Scriptures as much more anarchic than any established religion credits. For all that, U2 has often been seen as a Christian rock band.

We really f--ked that up, though. We really f--ked up our corner of the Christian market. I think carrying moral baggage is very dangerous for an artist. If you have a duty, it's to be true and not cover up the cracks. I love hymns and gospel music, but the idea of turning your music into a tool for evangelism is missing the point.

Music is the language of the spirit anyway. Its first function is praise to creation--praise to the beauty of the woman lying next to you, or the woman you would like to lie next to you. It is a natural effusive energy that you shouldn't put to work. When those people get up at the Grammys and say, "I thank God," I always imagine God going, "Oh, don't--please don't thank me for that one. Please, oh, that's an awful one! Don't thank me for that--that's a piece of [crap]!" The most powerful idea that's entered the world in the last few thousand years--the idea of grace--is the reason I would like to be a Christian. Though, as I said to [U2 guitarist] The Edge one day, I sometimes feel more like a fan, rather than actually in the band. I can't live up to it. But the reason I would like to is the idea of grace. It's really powerful. You've also been drawn to the spiritual struggles of rockers like Little Richard, Jerry Lee Lewis, and Marvin Gaye. I was never tormented in the way those early rock and rollers were between gospel and the blues. I always saw them as parts of each other. I like the anger of the blues--I think being angry with God is at least a dialogue. You know, [Robert Johnson's] "Hell Hound on My Trail"--the blues is full of that. And [it runs] right through to Marilyn Manson.

These are big questions. If there is a God, it's serious. And if there isn't a God, it's even more serious. Or is it the other way around? I don't know, but these are the things that, as an artist, are going to cross your mind--as well as "Ode to My New Jaguar." [laughter] The right to be an ass I will hold on to very tightly. I just have to be allowed that.

6 Things I Will Teach My Children About God