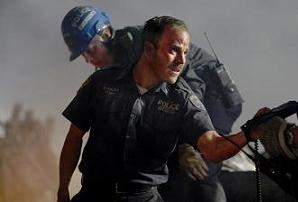 Exclusive "World Trade Center" Video
Watch a film clip and other features about finding hope amid the 9/11 tragedy.

Oliver Stone's "World Trade Center" is a story of triumph over tragedy, hope over despair, and life over death. It is a courageous film, one that chooses to portray the horrific attacks sensitively, in understated terms, and to deal not just with the terror of the day but, even more importantly, the humanity of its heroes and the commitment of so many people to rescue survivors.

Sept. 11 happened, and it will be in our minds forever. But equally important is the story of Sept. 12, the day we got out of bed and responded to the horrific acts of violence with hearts of courage and compassion, as we sought to rescue any survivors and, ultimately, to find the remains of the dead. Oliver Stone's film is a tale of 9/12.

Because I was one of the pastors involved in ministering to the needs of rescue workers at Ground Zero in the days and months after this tragedy struck, I had the privilege of watching "World Trade Center" with 9/11 family members. Doing so, I was made acutely aware of the palpable pain that still resonates for many of us. But beyond that, Stone's movie also reminded me vividly of the goodwill and heroism I witnessed the next day. Based on the true stories of John and Donna McLoughlin (played by Nicholas Cage and Maria Bello) and Will and Allison Jimeno (Michael Pena and Maggie Gyllenhaal), the film weaves together a compelling narrative about the way these two families' fates intersect. Upon hearing about an accident at the World Trade Center, Sergeant McLoughlin and his officers, including Will Jimeno, immediately head in that direction. En route, the second plane hits the South Tower and the officers are notified by radio, thereby eliminating any need to show those horrific, all-too-often-seen images of the attacks--just one example of the sensitivity Stone shows to those who suffered such great loss on that day.

Arriving at Ground Zero, these men--along with everyone else responding to the emergency--are overwhelmed by the gargantuan nature of this tragedy. McLoughlin and his crew enter the towers, only to be consumed soon thereafter by their collapse. Thus begins the central plot in this heroes' journey: the struggle for survival by two men, McLoughlin and Jimeno, who are severely wounded, trapped under heavy debris, and gasping to breathe through dust and ashes.

The story unfolds from this point as a dialogue between two men who, although hopeful they will survive, nevertheless acknowledge the grim reality of their likely deaths. Back and forth they encourage one another, discussing their wives, the love they have for their children, and Jimeno's dreams for his daughter yet to be born. In great agony, they recite together the Lord's Prayer, which becomes a lifeline for them.

As they struggle to keep alive, the story shifts to Connecticut, where a former marine staff sergeant, Dave Karnes (hauntingly played by Michael Shannon), decides--with the help of prayer and his pastor--to go to Ground Zero because he believes that God has called him to do search and rescue.

At his church, the camera lingers on the cross, a dramatic visual that becomes a defining moment in the film. Stone, however, avoids a simplistic portrayal of faith, instead showing religion in all its complexity--as something that can drive us both to heroic actions of love and to justify of the need for revenge. Toward the end of the film, with a gently placed, almost throw-away line, Karnes says under his breath with religious fervor, "It's gonna take a lot of good men to avenge this."

Before that, though, Karnes spots McLoughlin and Jimeno in the rubble, leading to a harrowing drama of rescue. The two officers are rushed to the emergency room, where McLoughlin utters the most compelling words in the whole movie: "Your love saved me."
In telling this story, Stone gives to us a message about our own healing: Love is salvific. This is a vital message for all of us as we approach the fifth anniversary of 9/11. Watching the movie, I was reminded of Viktor Frankl, a Nazi concentration camp survivor, who, in speaking about his own survival, offers an eloquent version of McLoughlin's tender declaration:

A thought transfixed me: for the first time in my life I saw the truth as it is set into song by so many poets, proclaimed as the final wisdom by so many thinkers. The truth--that love is the ultimate and the highest goal to which man can aspire. Then I grasped the meaning of the greatest secret that human poetry and human thought and belief have to impart: The salvation of man is through love and in love.

Watching "World Trade Center" was a reminder of all we lost that day. Just the mention of the first plane hitting the towers took me back to my own harrowing experience of that day. I was in my office--three blocks south of the South Tower--when a loud "crack" took us by surprise. Going to the windows of our outer office, I saw papers drifting down sideways, the edges burning. When we found out that the World Trade Center had been attacked, I immediately ran to see what I could do to help.

As I stood on the corner of Liberty and Church Streets, taking in this indescribably violent event, I was terrified to hear the second place fly overhead and hit the South Tower. At that point, the only thing I could do was run for my life. Dodging debris, and running alongside screaming, petrified people, I was totally in shock. I could do little more than run back to my office building, and once there, I helped evacuate our children from their preschool. But Stone's movie also reminded me vividly of what took place on 9/12. At the break of dawn, I put on my boots and walked the mile and a half from my apartment to St. Paul's Chapel, where I served as the priest-in-charge. Seeing the twisted, gnarly columns of steel, the shattered and broken glass, the toxic clouds of smoke, and the debris and ashes that covered everything in Lower Manhattan, it was clear that I was walking into a war zone. I was surprised to find that St. Paul's Chapel was still standing. At that point, I knew we had been spared for a reason: not that we were holier than anybody who died across the street, but that now we had a big job to do.

For the next eight-and-a-half months, I experienced--to borrow a phrase from the musical "Rent"--a "Season of Love," in which people of goodwill and generosity from all over the world convened at St. Paul's Chapel to provide services such as massage therapy, chiropractic care, podiatry, food service, grief counseling, and pastoral care by clergy. By the end of the relief operation, we were privileged to serve over half a million meals to rescue workers just like the heroes represented in Stone's film.

Stone does us a great service by bringing this message back to us as we approach the fifth anniversary of 9/11. As we move forward, it is so important that we remember the love of the people we lost, which continues with us forever, and the experience we had as a community, which bonded us together in a powerful way.

There are rare, singular moments in history when communities become unfrozen, and new possibilities emerge; 9/12 was just such a moment and a moment, which we now need to reclaim. During that time, we discovered so much about ourselves as a people and as a city. We discovered that we could be more than we ever dreamed we could be: more generous, more loving, more compassionate, more giving, more courageous. The greatest tribute we can give to the loved ones we lost is to carry this experience into the future--that their death and their loss will inspire us to be more loving and not vengeful. In their honor, let us begin now, during this fifth anniversary year, to create a future that goes beyond repaying violence for violence and embraces hope, compassion, generosity, and love.

"World Trade Center" is an uplifting story in spite of its backdrop of devastation. It is a tribute ultimately to the goodness of humanity, the heroism of the human spirit, and the triumph of the power of love amidst the brokenness of life.