Po, from Kung Fu Panda, is constantly faced with obstacles to overcome and surprisingly he never disappoints. There are a number of lessons that we’ve all learned from these Po and the furious five. 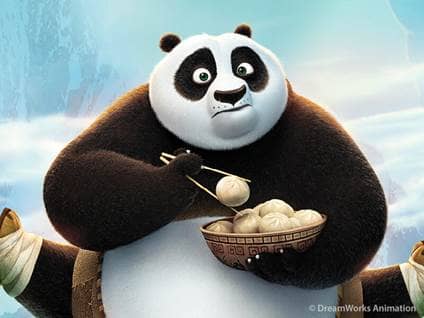 If you’re a parent there’s no doubt that you know who was named the ‘Dragon Warrior’. After two successful films, Po’s Kung Fu Panda is continuing his legendary awesomeness in Kung Fu Panda 3.

In Kung Fu Panda 3 Po reunites with his biological father and travels with him to a secret sanctuary of pandas. Unfortunately, these pandas do not fit in. There in the sanctuary Po meets Mei Mei who is an overly eager panda who was promised to Po through an arranged marriage when they were children. Also, an ancient spirit called Kai begins to terrorize China and steals the powers of defeated kung fu masters. To help revive the sanctuary and beat Kai, Po must learn to train the village so that they can become a band of Kung Fu Pandas.

Po is constantly faced with obstacles to overcome and surprisingly he never disappoints. There are a number of lessons that we’ve all learned from these Po and the furious five.

Nothing is impossible: During the first film, it appears that Po has no real talents. In fact, Master Shifu initially rejects Po and writes him off as a fan. However, in the end he proves to be a brutal Kung Fu Panda and in fact becomes the ‘Dragon Warrior’. Po never gives up and is able to fight against his low self-esteem and negative belief system to discover his true potential.

Don’t dwell in the past: The films discuss living in the present and the importance of not dwelling in the past. If you continue to focus on the past, you’ll find that your present is bogged down with negativity. In the films, Po must overcome his desire to look back on shortcomings in the past and focus on the day at hand. We should all take note of Po’s resilience and apply it to our bad days.

Stop worrying what others think: Everyone in the Furious Five relentlessly criticized Po. They gave him a hard time about his competency and deemed him as delusional. Yet, when everything is said and done Po is the strongest amongst them all. Po’s stamina and mindset teaches us that we should never give up. Never allow someone else to tell you what you’re capable of. Instead of accepting another statistic, break the mold and push the envelope. If you listen to the voices of others you’ll have a false perception of your strengths and weaknesses. However, if you chose to stand up for yourself you’ll discover your greatness and true self worth.

Don’t let anyone stop you from attaining your dreams: Perseverance is the element everyone needs to reach their hopes and dreams. At some point in life you’ll be faced with criticism and defeat however, it’s your job to keep climbing the mountain to reach your dreams. Po was called stupid and his strength was constantly underrated yet he never gave up. He knew what he wanted out of life and he didn’t give up. Perseverance and patience can often times be the only thing you need when striving to reach a personal goal.

Animated films with valuable life lessons should be household staples. It’s important that children learn how to become the best versions of themselves. As adults, it’s impossible to teach little ones about setbacks because we’ve become jaded due to prior experiences in life. However, a cute panda bear that knows kung fu – now that’s the perfect spokesperson for a young one.