Rowling’s novels are every bit as Christian as those of C.S. Lewis. 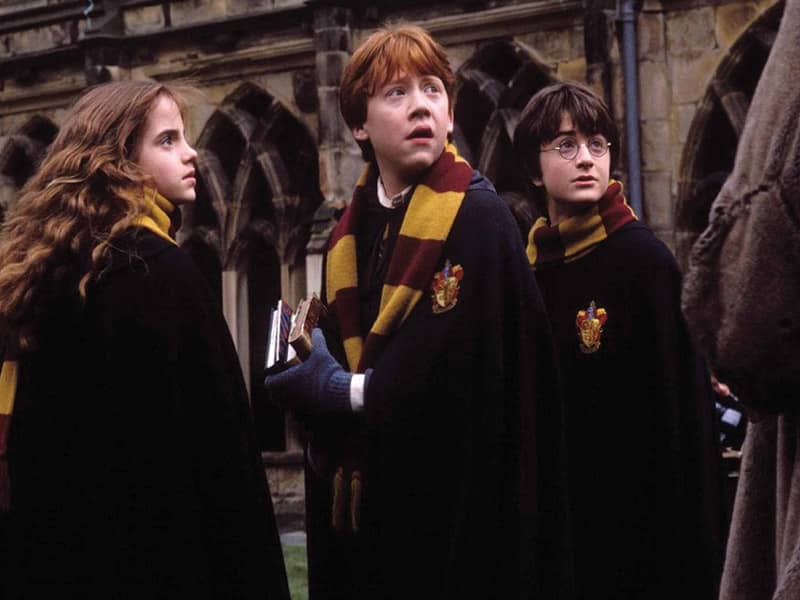 Warner Bros.
Considering the extremely public knowledge that some Christian parents refuse to let their children read “Harry Potter” due to fears of it encouraging witchcraft, most people do not think of J.K. Rowling’s novels as a particularly Christian series. When thinking about Christian themes in fiction, they are more likely to name C.S. Lewis’ “The Chronicles of Narnia” or perhaps Tolkien’s “Lord of the Rings” series. “Harry Potter,” however, is riddled with nearly as many Christian moments and references as either of these two older series.
The overarching story in “Harry Potter” is a common one, but that does not make it less Christian. The defeat of darkness and the victory of the forces of good are a staple in fantasy books, but “Harry Potter” has more Christian themes than the battle between light and dark. Redemption, temptation, selflessness and martyrdom all play an important role in the series. The final book, “Harry Potter and the Deathly Hallows,” even quotes the Bible twice. The quote on the tomb of Albus Dumbledore’s mother and sister is taken directly from Matthew 6: “where your treasure is, there will your heart be also.” 1 Corinthians 15:26 makes an appearance in the same chapter when “the last enemy that shall be destroyed is death” is inscribed on the gravestones of Lily and James Potter, Harry’s parents. These shout outs, however, are far from the only openly Christian scenes in “Harry Potter,” especially in “Deathly Hallows.” Here are the top four Christian moments in “Harry Potter.”

Redemption is a common theme in the Bible, and it is central to the story of one of J.K. Rowling’s most popular characters: Severus Snape. Snape is bullied terribly as a child by the Marauders, a group made up of Harry’s father and Harry’s father’s friends. This, combined with an abusive home life and interest in Dark Magic, lead Snape to become obsessed with power. He joins the followers of Lord Voldemort and fights for the forces of evil. When Lily Evans, Harry’s mother and Snape’s childhood friend and love is targeted by Voldemort, Snape turns against Voldemort and tries to protect the Potter family. When he fails, he spends the rest of his life working to protect Harry and make up for his past mistakes. His final actions give Harry the knowledge he needs to defeat Voldemort once and for all.
Snape is an unpleasant person, but his story would be a familiar one for Christians. Lured to darkness by false promises, he is saved by love, and his sins are forgiven. He is not the only story of redemption in “Harry Potter.” The Christian theme of redemption reappears in reference to one of the least expected characters to be associated with it: Lord Voldemort himself.
During the final battle, Harry offers Voldemort one final chance to mitigate the damage that decades of murder and Dark Magic have done. He urges Voldemort to “try for some remorse” because he has seen what will become of Voldemort if he remains unrepentant. The Dark Lord will be cursed to spend eternity in a weak infantile body that struggles to breathe and looks raw and flayed. This chance for even the most evil and sinful to achieve some redemption through the repentance of sins is about as Christian of a message as can be found.

Harry Potter and his friends deal with quite a bit of temptation throughout the series, but it is especially clear in the final book, “Harry Potter and the Deathly Hallows.” In “Deathly Hallows,” Harry and his friends have to gather and destroy Voldemort’s Horcruxes in order to turn the Dark Lord back into a mortal man so he can be defeated. The Horcruxes can only be destroyed by a few substances, and until the heroes acquire them, they have to keep the Horcruxes nearby. The Horcruxes, however, continually tempt and torment the heroes, culminating in a scene where one of them shows Ron Weasley a vision of Harry and Hermione betraying him in an attempt to get Ron to kill Harry. The heroes also have to deal with the temptation to gather the Hallows instead of the Horcruxes as the Hallows are said to make whoever possesses all three the “Master of Death.”
The dangers of keeping temptation nearby or seeking the easy route are familiar warnings to Christians. The Horcruxes, however, take this one step further and act in many ways as demons. They answer to a greater evil, Voldemort, and seek to undermine, tempt and otherwise torment those who are unfortunate enough to possess them.

The most overtly Christian moment in “Harry Potter” is undoubtedly the death and resurrection of the titular character at the end of the seventh book. Just like a certain Galilean that Christians are overwhelming familiar with, Harry walked to his death willingly. He refuses to even hold his wand when he faces Voldemort of his own volition to make sure that he does not use it out of instinctive self-defense. Instead, Harry allows Voldemort to kill him without even a word in his own defense. Harry’s death, however, is not permanent. He returns to life a short time later, purged of the Dark Magic Voldemort left behind when Voldemort tried to kill Harry as a child.
To further emphasize the parallels with Christ, Harry’s willing sacrifice means that Voldemort’s magic cannot hurt Harry’s friends anymore. Harry’s death and resurrection have formed an invisible barrier between the forces of darkness and those people who believed in and fought for Harry.
While Harry’s resurrection is no doubt the most flagrantly Christ-like, there are Christian references in Voldemort’s twisted rebirth. In “Harry Potter and the Goblet of Fire,” Lord Voldemort’s servant, Peter Pettigrew, raises the Dark Lord from the dead. The ritual he uses, however, is a chilling reversal of the Last Supper. At the Last Supper, Christ gives the disciples His blood and body. Voldemort’s resurrection, however, demands that his followers sacrifice their blood and body. The ritual states that blood and bone must be “forcibly taken” and “unknowingly given.” To compound matters, Voldemort’s form that is placed in the potion to regenerate resembles an infant, calling back to Biblical descriptions of child sacrifice. In a further reversal of what Christ did, Voldemort does not forgive his followers for believing he was dead. Instead, he chastises then tortures them for abandoning their “master” all while Harry watches helplessly.

One of the most often missed Christian parallels in “Harry Potter” is the way that Harry and his family are hidden from the magical world. When Harry is an infant, Voldemort learns that there is a prophecy that Harry will “possess the power [Voldemort] knows not” and defeat Voldemort. In response, Voldemort attempts to hunt down and kill the object of the prophecy. For their safety, Harry and his family are hidden away. Voldemort, however, tracks them down eventually and kills Harry’s parents but fails to kill Harry. Harry is then smuggled to his non-magical relative’s home where he lives for 10 years, unaware that he is hailed as the “Boy Who Lived” or that magical people believe he defeated Voldemort as an infant.
The hiding of Harry’s family and of Harry himself mirrors two episodes from the Bible: the story of Moses and the escape of the Holy Family from Bethlehem while Herod searches for them and carries out the Slaughter of the Innocents. A family is hidden away from an evil lord after they receive a warning that they are being hunted. The evil lord nevertheless searches for them and kills people in the process. This is essentially the story of the Slaughter of the Innocents and Herod’s unsuccessful attempts to find the baby Jesus. How Harry is hidden away from the magical world, and is unaware that it even exists or that he is a part of it, mirrors the childhood of Moses. They were both raised by other people and were unaware that they were part of another culture. 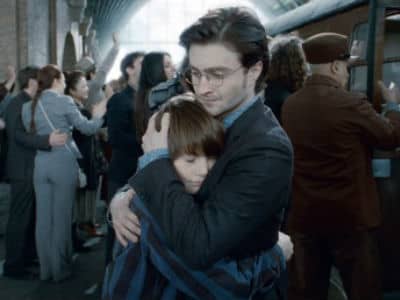 The “Harry Potter” series has drawn quite a bit of fire over the years from conservative Christians who fear that the books encourage witchcraft and the practice of the occult. Although magic is a key plot device in the novels, the books are actually riddled with Christian themes and references. From an overarching story that emphasizes the victory of good over evil and light over darkness to the important role families play in children’s lives, “Harry Potter” is a very Christian story. Good vanquishes evil, and selflessness and redemption reign supreme. At the end of the story the world is saved because one man died to save them all. 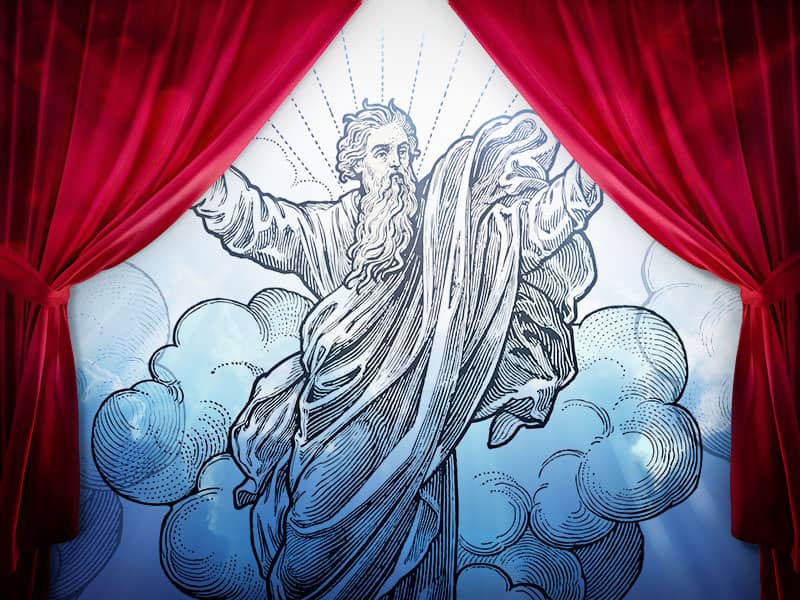 Christian themes are prevalent in many popular movies. Read next feature >
Stephanie Hertzenberg is a writer and editor at Beliefnet. She is a graduate of the College of William and Mary where she majored in Religious Studies and minored in Creative Writing. She maintains an avid interest in health, history and science.
More from beliefnet and our partners
Add some inspiration to your inbox.
Sign up for Beliefnet's Entertainment & Celebrities newsletter.
From time to time you will also receive Special Offers from our partners