The Gospel According to The Little Mermaid

Some Christian families have shied away from showing The Little Mermaid to their family because there is a sea witch in the story and have mistaken the notion that the film promotes witchcraft. This is a shame. 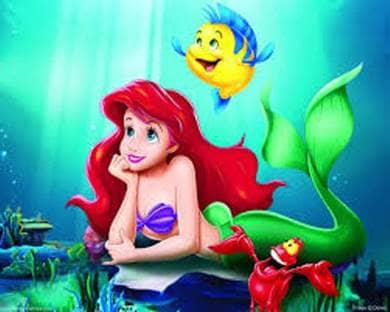 Remember when Disney’s “The Little Mermaid” was the “new” cartoon in theaters? Believe it or not, this year marks the film’s 25th anniversary of the film. To celebrate, the Disney Studios are releasing the Blu-Ray version of the film on October 1st.

Based on the classic Hans Christian Andersen tale, but with a decidedly happier ending, Disney’s version of the “Little Mermaid” has much deeper undertones if you choose to see it that way. Spiritual symbolism can be seen throughout the whole film and can enhance your family’s next viewing.

Some Christian families have shied away from showing the cartoon to their family due to the fact there is a “sea witch” in the story and have mistaken the notion that the film promotes witchcraft. This is a shame. Yes, this cute little film may be too intense for very young children, but the story itself can actually be used to share the gospel.

Even Jodi Benson, the voice of Ariel and also a believer sees the spiritual connection in the film. “I think that we have this message that’s going on with Ariel reaching for something greater than herself, getting outside of the box, reaching for something that seems unattainable and I think that for a Christ follower, that is something,” said Benson in a recent interview. “We want to live outside of the box and I definitely don’t want to put God in a box, so I want to be able to dream big and kind of let go of my small mindedness. I think that with Ariel, we see her character having some of those same kinds of qualities.”

Some things to keep in mind during your next viewing:

Ariel Represents Us
Ariel is a curious girl who isn’t satisfied with the status quo. While her sisters are content with their simple lives, Ariel explores outside of her “world” and discovers a number of artifacts from the human world. She knows that there is more to see out there if only she could get to it. Because of this, she feels a void in her life. She desperately wants be part of this other world. Many pre-Christians know this void all too well and don’t know how to fill it.

Ursula Represents Satan
It’s no surprise that Ursula the Sea Witch would be compared to Satan. She’s deceptive and cunning. Ariel knows that she is bad news, and yet is easily tricked when Ursula explains that she isn’t evil, but rather, she just wants to help her fellow sea-folk. Like the devil is jealous of Jesus, Ursula is jealous of King Triton, Ariel’s father, and wants nothing more than to reign victorious as the queen of sea. What better way to get back at him than through his daughter? Ursula promises Ariel that she can make her human, but there is a catch. Ariel must hand over her God-given voice as collateral. With Satan, there is always a catch and we humans are all too happy to give over our God-given gift of innocence. Like Ursula, he wants to distract us from our true potential for a short term payoff.

King Triton Represents God and Jesus
King Triton is the god of the sea.

Everything he sees is his and is under his command. Just like how God forbid Adam from eating the fruit of the tree of knowledge in the Garden of Eden, King Triton forbids Ariel from seeking advice from Ursula. However, in both case, both kings allow free will and in both cases, both Adam and Ariel take advantage of their free will with terrible results. Arial is captured by Ursula’s minions and because of the deal she made, is destined to die as a piece of seaweed. To her surprise, King Triton takes her place and endures the punishment meant for Ariel. Even though Ariel disobeyed her father, he still loves her, trades places with her and gives up his life for her. In a sense, King Triton is like Jesus dying on the cross for our sins giving the enemy the false impression that they are now in control. Just like when Jesus rose again from the grave, so does King Triton and banishes Ursula from the sea.

Jeffrey Totey is lover of pop culture and tends to see spiritual truth in the oddest places. Sometimes he writes about fluff other times, he'll write about substance. You can read more of his work at www.WriterofPop.net.