The Secret History of the Knights Templar in America

Two authors write that the Gnostic beliefs of the Knights Templar were passed down through the Founding Fathers.

The book Templars in America tells the story of a European noble family that explored America nearly 100 years before Columbus. In their study, authors Tim Wallace-Murphy and Marilyn Hopkins write that the medieval warrior monks of the Knights Templar had trading links with Native Americans in Nova Scotia and New England, and that the European families—who were members of the Templars and claimed to be descended from Jesus—passed their beliefs through Masonic teaching into the U.S. Constitution and the Declaration of Independence.

The main point of their new book, however, is to report evidence they believe ties those European families more directly to America. They say that a member of one of the European families, Earl Henry Sinclair, voyaged to New England in the 1300s and ultimately assimilated with the Native American people and died there.

Is the history of the Knights Templar disputed?

Oh, yes it is. There are two totally different views on this. One is that it was founded by devout Catholics to defend the faith—a view that I’m afraid we would dispute quite vigorously. The other is the view we’ve just given you, that it was founded for heretical reasons, by families trying to reclaim their patrimony—which was in their view the Holy Land, because they claimed descent from the high priesthood of Jerusalem.

Tell me about this family trying to keep its patrimony.

It wasn’t one family—it was a series of them. There were 24 hereditary high priests in the temple of Jerusalem, and after the destruction of Jerusalem in A.D. 70 they scattered throughout Europe and the Far East. Their descendents kept in touch and only married within that group of families—keeping the bloodline pure and passing down their teaching in secret. Now, they knew that Jesus wasn’t God and that he had taught a form of spirituality which was totally in conformity with Judaic tradition and with the Egyptian tradition that preceded it.

How does that story connect with Gnosticism?

These families were Gnostics. The church required you to believe in a set of fixed dogma and accept it as fact. It said that if you are not a good boy down here then you’ll burn in hell for eternity; or you could conform to church belief and join the feathered choir in heaven. The Gnostic is a different animal. He follows a teacher who teaches an ascending path of initiation, whereby more and more is revealed until ultimately you attain union with God. Examples would be Buddhists, Zoroastrians, Egyptians, or the Jewish Kabbalists. And the families we’re talking about were following something very closely akin to the Kabbalah and the Egyptian tradition.

How does Gnosticism connect with the legends surrounding Mary Magdalene and Jesus?

She was his wife. The Christian concept that Jesus was God and therefore he was untouchable by anybody is nonsense, because as a Jew he would have had to conform to Jewish tradition at that time—and Jewish tradition said that the male had to marry and have children. And he was also heir to the throne of David. It would have been incumbent on him to produce another heir to keep the bloodline going. Had he not been married and done that, he couldn’t have been the heir to the throne.

And Mary Magdalene came from a very important family—far more important than the Christian gospels tells us. And it probably was an arranged marriage by the two families to promote the aristocracy because Jesus was certainly an aristocrat, not just a humble carpenter.

Who were the Knights Templar?

On the surface they were a medieval, monastic order who gave the appearance of being part of the church and devout Christians. In actual fact, they were anything but that. Yes, they were a monastic order, they’d been approved by the pope, and they were virtually independent of all civil and other church authorities, being responsible through their grand master to the pope and the pope alone. But in actual fact, they’d been founded by a group of families who had a very different and a very heretical view about Christ and his teaching. They had kept that teaching alive in secret for nearly 1,100 years and conspired to set up a counterbalance to church power.

And then when he was killed, you believe she fled to southern France?

Yes, there is a tradition that said that she landed in a boat with Lazarus. Each year there is a festival there. And on the first day of the festival, they carry the patron saint, known as Saint Sarah, down to the sea. She is known as Sarah the Egyptian. The story says that she was a servant girl, but it’s our belief that she was actually Jesus and Mary Magdalene’s daughter.

Now explain the relationship between that story and the families of the Knights Templar.

Families who founded the Knights Templar were part of the same group as Jesus’ descendents because one of Jesus’ brothers was a high priest—James the Righteous. So all these families had claims to ancient lineage and ancient teaching, and they all intermarried.

Now help us understand the connection between Earl Henry Sinclair and these families.

The Sinclairs are one of the families—they’re one of the leading ones, in fact. And a grandson of Earl Henry Sinclair, William Sinclair, was regarded by the families as the Fisher King, the heir apparent to the throne of Jerusalem. The man was an intellectual giant, a genius. But his grandfather, Earl Henry Sinclair, is the one we’re interested in from the point of the view of the voyage.

Could you explain the voyage?

This is where the fun starts. As Oscar Wilde once famously said, “Many people discovered America before Columbus, dear boy, but most of them had the good sense to keep quiet about it.” He was probably being sarcastic, but in actual fact, he was telling a great truth because the Romans and the Egyptians had been there repeatedly and they kept quiet about it for reasons of protecting their sources of trade.

Henry Sinclair’s family descended from the Vikings. And it was the Viking sagas, which are the first written record of Europeans visiting America, are quite specific about how to get there. They island-hopped across the North Atlantic. They were never more than a couple hundred miles out of sight of land. And they left in their sagas precise sailing directions. Henry started to explore the North Atlantic following the paths laid down by Viking ancestors. And eventually ended up in Nova Scotia and New England.

Tell us some of the places in New England that they landed.

They went inland to Westford in Massachusetts, because there is rock carving there known as the Westford Knight, which commemorates the death of one of Earl Henry’s companions, Sir James Gunn.

And then we spend quite a lot of time in the book examining one of the most controversial buildings in the North American continent, the Old Stone Mill at Newport, which we refer to as the Newport Tower. This is a classic example of rubble-built, Romanesque architecture in the Templar tradition of round churches. The proofs we put forward we think are conclusive, though we’re aware that opinions are sharp, and they’re divided about the origins of this tower. So trying to convince people is probably a waste of time.

You contend that Earl Henry Sinclair died there.

Nobody’s sure. That’s one of the mysteries. The reason we came to that conclusion is because he was a very important person. He was a premier earl of Norway; he was also an incredibly influential Scottish lord and yet, there is no record anywhere of his funeral.

The other reason we’ve come to that conclusion is that his son was never installed as the earl. The title went to his grandson, even though on his death his son would automatically inherit it. And we suggest he wasn’t officially installed because nobody knew for sure whether his father was dead or not.

Because of the links he’d made in Nova Scotia and the fact that [Native American] spiritual traditions were so similar, we think he would have very easily assimilated with them. Life on that side of the Atlantic was probably a lot easier than on this, with the conflicts in Europe, and he just decided that he’d go back and assimilate with them. And frankly enough, there are people over there who bear a great deal of resemblance to the Sinclairs on this side of the Atlantic.

So you’re suggesting that the spiritual importance of this journey is that it unites the Gnostic spirituality of these ten Templar families with Native American spirituality?

Is your contention that this is because this is a universal spirituality found all over the world? Or are you suggesting these groups had contact with each other prior to his voyage?

I don’t think they had contact with each other. But if there is one divinely inspired truth, and God is merciful and loving, then that truth will always be available to all people throughout the world, irrespective of culture or time.

Why do you believe this other path of Christianity was suppressed in the first place and why it had to be kept secret?

Because if you disagreed with the church, you were condemned for heresy. And you were invited to the next church barbecue as the chief item on the menu.

Can you help us understand the connection you make between North American Freemasonry and the founding of the United States?

Freemasonry played a pivotal and formative role in the creation of the American constitution and the American way of life. If you study the history of the people who led the American Revolution, you find that the leading figures, military, and politically and philosophically—I’d say 85 percent of them were members of the Freemasons, including George Washington. And a similar percentage of people who composed and created the American Constitution, came from the same background. Masonic principles are bound in the Constitution.

Freemasonry is an offshoot—it derived indirectly, perhaps, but it derived from the Knights Templar and their teaching. It was certainly created and formed by the secret families. And the family that played the major role in that, were of course the Sinclairs of Rosslyn because the lords of Rosslyn were the hereditary patrons of masonry throughout Scotland.

What was the reason for starting Freemasonry?

It was a way of bringing monotheism and true spirituality back to people outside the families in a way that wouldn’t attract the unwelcome attention of the church. It did, of course, but it still managed to survive. They kept their teaching secret, but the Catholic church has traditionally viewed freemasonry as its sworn enemy.

What do you say to people who say, “Wait, this isn’t the history I know"?

Check our sources. That’s why we footnote our work so carefully. Our opinions are like anybody else’s opinions. They can be modified, argued about, accepted, rejected. But you can’t argue with the actual facts—and the access to the facts was restricted or forbidden for centuries, until now. 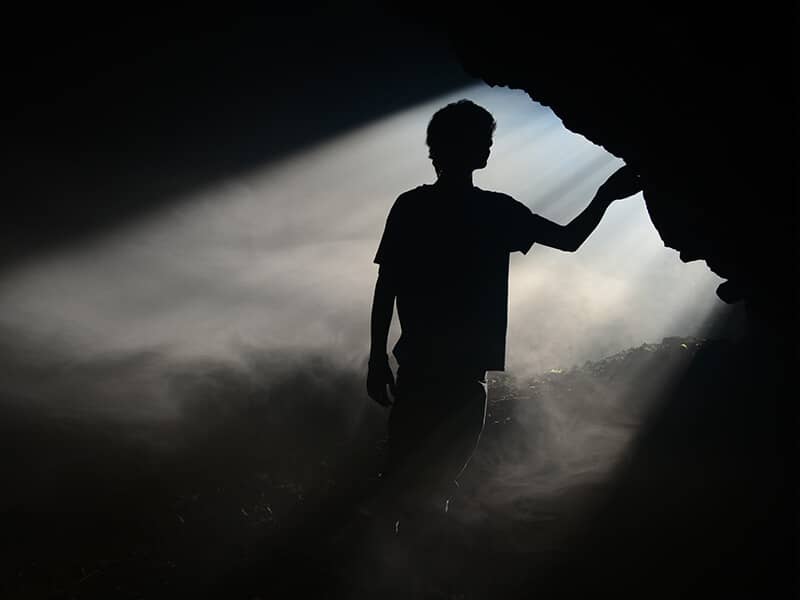