Mary Poppins by the Numbers

In honor of the 50th anniversary of Mary Poppins - let's look at the interesting facts that surround the masterpiece. 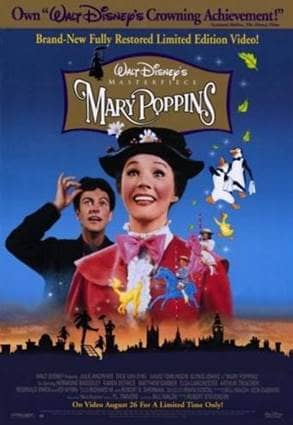 In honor of Mary Poppins 50th anniversary and the release of Saving Mr. Banks, here are 25 bits of trivia by the numbers.

2: Brothers who wrote the music for Mary Poppins (Robert and Richard Sherman)

3: Movies shot at Disneyland (Saving Mr. Banks, That Thing You Do and 40 Pounds of Trouble)

4: Children mentioned in the Mary Poppins book – only two remained for the movie

6: Millions of dollars spent on the making of Mary Poppins – the most expensive film for the company at the time.

7: Days it took to film the “Step in Time” sequence in Mary Poppins

10: Cents extra was paid to Matthew Garber who played Michael in the film for every time they filmed the tea party scene as he was afraid of heights.

17: The house address of the Banks family on Cherry Tree Lane

20: Years for Walt Disney to obtain the rights to Mary Poppins

25: Number of guest Colin Farrell invited into his home to watch a screening of Mary Poppins since he knew that he wouldn’t get a chance to meet the other cast members of the 1961 portion of Saving Mr. Banks

28.5: Millions of dollars the studio took in for Mary Poppins in 1965 alone - the most successful feature for the studio until then

34: Letters in the word “Supercalifragilisticexpialidocious”

47-50: Tries it took for Julie Andrews to nail the lullaby song “Stay Awake”

100+: Glass and matte paintings used to recreate the London skyline in Mary Poppins

124: Number of pieces of artwork that were created between 1961 and 1964 were shared with the Saving Mr. Banks production team including storyboard sketches, concept paintings, set drawings, costume designs and promotional art

139: Minutes of film for Mary Poppins