Check out these fun facts about one of the best movies on the life of Jesus.

One of the best movies that we have watched about the life of Jesus was the Passion of the Christ, Mel Gibson’s profound attempt to revisit the crucifixion.

“The Passion of the Christ” was released in 2004, and made a great impact on the Christian community, and the world, for those who went to see it. Even though this depiction was graphic (parental discretion advised), it still failed to capture the full reality of what Jesus endured during his final hours on earth, but it came as remarkable close as we would expect a movie to.

What we want to challenge you with is some of the facts and secrets behind filming this historical, and epic movie. We have always been fascinated by what happens behind the scenes of a movie, and this one was no exception.

Jim Caviezel was seemingly the perfect candidate to play Jesus Christ. What you may not have known is that he experienced a shoulder separation when the 130-pound cross was dropped unto his shoulder. That scene is still in the movie.

That was a heavy cross. It was probably more than half the weight of a typical Jewish man. It took great inner strength for Jesus to carry such a weight after being severely scourged with a cat-o-nine whip, hit in the head with a reed, had a crown of thorn pressed into his head, and abandoned by all his friends.

Jim did it with a separated shoulder, though we are sure he did not traverse the full length of the journey but the pain in his face during that scene would have been real.

The highest grossing independent film is a “Jesus movie.”

The highest grossing independent film is a “Jesus movie.”

This film had more pre-ticket sales than any other movie in history. It grossed $611,899,420 in worldwide ticket sales since its release. The second highest grossing independent film is ‘Slumdog Millionaire’, a novel adaptation.

Did you notice that? The highest grossing independent film in the world is a ‘Jesus movie.’ This movie did not just appeal the Christians, as we are sure a lot of Christians still did not go to see the movie, but the quality of this attempt had worldwide appeal.

There is hope for Christian films, and we have seen a remarkable improvement in the quality of films being released with a Christian theme, even though some are still being produced by the secular community, and not by those in the Kingdom of God.

Caviezel’s appearance was greatly changed for the role.

Caviezel’s appearance was greatly changed for the role.

Jim was given a prosthetic nose and a raised hairline during his makeup. His blue eyes were changed to brown in the film. We always thought Jesus had blue eyes. Now where did we get that crazy idea from? Better yet, what historical proof do we have that His eyes were indeed brown?

Mel wanted to transform the actor into as close an image of Jesus as they had in mind. We have seen many versions over the years, and this was one of the best. We have seen Jim in other movies, but we are just grateful that his impersonation of Jesus was very different from the villain he played in the Harry Potter series.

Assistant Director Jan Michelini was hit twice by lightning during the filming of the movie. There is actually a rumour that Jim was also hit while hanging on the cross. We are not sure of the spiritual significance of such an occurrence, but there were no reports of anyone turning into the flash.

In the scriptures, lightning comes from God. For example, Psalm 135:7 says, “He causes the vapours to ascend from the ends of the earth; Who makes lightning for the rain, who brings forth the wind from His treasuries.” So, God sent forth lightning on the set of The Passion of the Christ. Was it a wake-up call, or a confirmation that He approved the film? Maybe it was a sign to those involved. Food for thought!

They originally opted to not use a musical score.

They originally opted to not use a musical score.

Mel Gibson originally opted not to use a musical score for the film. He eventually decided to use one and, guess what, it was nominated for ‘Best Musical Original Score’ for a motion picture at the 2005 Oscars.

We can’t imagine a movie without a musical score. That would feel like watching a behind the scene footage of a film. Do you notice how different the finished version of a movie looks to the behind the scene footage? If you take the music out of a film, you also take out the emotions. It is the music/sound that builds tension and causes people to jump in a horror film.

The element of music adds a surreal aura to the scenes. When Jesus actually lived through this experience, there was no dramatic sounds, no music score, no build up to that epic moment when He breath His last. Maybe it would have been nice to relive those moments, without that added component.

During the scourging scene, Jim accidentally got whipped twice. The first literally knocked the wind out of him. The second time hurt so much that it caused him to wrench his hands from the shackles, scraping his hand pretty badly.

Ouch! Watch the film again, and see if you can tell when that whip actually found its target. The facial expression will be much different, even more amplified. It’s not a bad experience, considering that the scriptures say, if we suffer with Christ, we will also reign with Him. The only difference is, Jesus took all thirty-nine, and not just two.

Most of the cast and crew converted after the film.

Most of the cast and crew converted after the film.

Because of their experiences through production, many of the cast members and crew converted to Christianism (Catholicism) after the completion of the film. Among those converted was an Atheist who played Judas Iscariot. His name is Luca Lionello.

Being in a film and playing the worst character role in terms of flaws can eventually lead to finding salvation, how much of an impact could the film make on those who watch the finished movie? We believe quite a lot.

One scene was inspired by Michelangelo’s famous statue “La Pieta.”

One scene was inspired by Michelangelo’s famous statue “La Pieta.”

According to Mel Gibson, the long shot of Jesus lying in Mary’s arms after being taken from the cross was greatly inspired by Michelangelo’s famous statue “La Pieta”. The Pieta is a work of Renaissance sculpture that is housed in St. Peter’s Basilica, Vatican City. It was the first of a number of projects of the same theme by Michelangelo.

This work of art also inspired many other depictions of this scene in other movies/documentaries. We imagine the life of Jesus had a greater impact on Mary, His earthly mother, than anyone else. As a matter of fact, Joseph was not mentioned in the Bible after they found 12-year-old Jesus in the temple baffling the minds of the Learnt men. But Mary continued, even after Jesus’ death and resurrection, all the way to His ascension.

The actress who played Mary was pregnant.

The actress who played Mary was pregnant.

Maia Morgenstern, who played Mary, was pregnant during the shoot, but she did not tell anyone, until one day she approached Jim and said in broken English, and a thick Romanian accent, “I have baby in stomach.” Jim got the idea. It must have felt a little awkward playing Jesus at the end of His life, while the woman playing his mother was preparing to give birth to new life. Talk about miracles.

Mel Gibson spoke endlessly about the number of miracles that happened to the cast and crew while shooting the film. Gibson recounted in an interview that there had been some unusual things happening on the set. Some of the miracles that took place were people being healed of diseases, sight and hearing restored, and the greatest of all, salvation. There was one little six-year-old girl, who was a daughter of a person connected with the crew, who had epilepsy since she was born. She has had up to 50 epileptic seizures a day. She was apparently near cured of her condition and did not have any fits and seizures for over a month after the film was released. It was also reported that she has been coping with her condition a lot easier.

Knowledge is good, so now you know. The Passion of the Christ is still the number one independent movie of all time, so you may want to see if you can get a copy, just in case you have not seen it yet. And even if you have, it’s a good movie to have in your collection as a reminder of what Jesus did to make redemption and salvation available to all humanity. All the weird, and remarkable occurrences that took place during production is just a confirmation that there is an unseen world watching, and our choices have a profound impact on that world, both for good and bad.

John 11:25, Jesus said to her, "I am the resurrection and the life. He who believes in me will live, even though he dies." 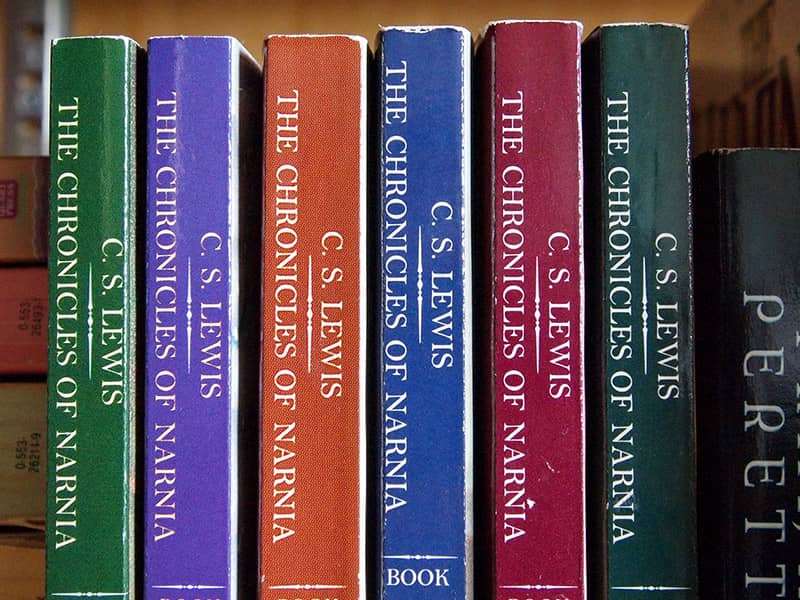 The Narnia Movies in Order
Here is the order of the Disney trilogy along with potential plans for more Narnia movies Read next feature >
Hermes Alberto Carvajal is an Editor for Beliefnet. To read more, visit Dios Es Bueno.

More from beliefnet and our partners
Hermes Alberto Carvajal