What really happened in the years surrounding the crucifixion of Jesus? This is the question at the heart of "The Final Inquiry," in which a Roman military commander examines reasons for the recent upheaval around the radical prophet--and finds some things he doesn't expect. 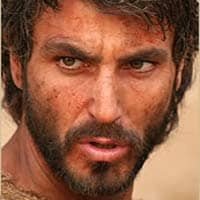 Inspired by the Fox Faith film "The Final Inquiry"

What really happened in the years surrounding the crucifixion of Jesus? This is the question at the heart of "The Final Inquiry," in which a Roman military commander examines reasons for the recent upheaval around the radical prophet--and finds some things he doesn't expect.

For us, it's an occasion to remember the years during and after Jesus, when Christianity blossomed from a small Jewish sect into a religious movement that spanned the Roman Empire. Click through our timeline to see the major events that influenced the spread of Christian faith. 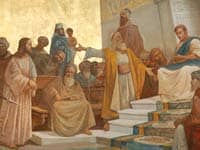 Jesus' activities in Galilee and Judea begin in 27 or 28 and end around 30 CE. The New Testament Gospels suggest that the Roman official Pontius Pilate--fearful of a riot during the Jewish Passover festival--ordered the crucifixion of Jesus. As Roman historian Tacitus puts it, "Christ suffered the extreme penalty during the reign of Tiberius at the hands of one of our procurators, Pontius Pilate." Another Roman historian, Thallus, may have reported a solar eclipse around the time of Jesus' crucifixion, but this report is fragmentary and uncertain. Three days after Jesus is crucified, a few of his followers claim that they have seen him physically alive. An oral history describing this event--preserved in Paul's first letter to the Corinthians, 15:3-7--emerges quickly and begins to spread throughout the Judean and Galilean provinces. 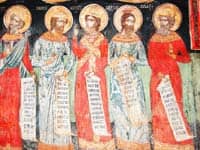 Around 32 CE, the followers of Jesus in Jerusalem select seven ministers to care for the needs of widows (Acts 6). One of these ministers, Stephen, seems to have offended some religious leaders as he spoke about the Jewish temple. Stephen is executed, crying out as he dies, "Lord Jesus, receive my spirit." A young man named Saul--a native of Tarsus, yet a citizen of the Roman Empire--watches over the cloaks of those who stone Stephen to death (Acts 7:57--8:1). After Stephen's death, Saul launches a campaign against the followers of Jesus. On his way to Damascus, Saul experiences a vision that changes the direction of his life (Acts 9:1-9)--and the direction of Christian history. Saul becomes a believer in Jesus around 33 CE. In May of 43, the new emperor Claudius Caesar invades Britain. In 44 CE, Claudius makes his way home from this mission, even as Saul--now known by his Latin name, Paul--undertakes a very different sort of mission. For two years, Paul proclaims Jesus as Messiah throughout Asia Minor. By 49 CE, the message of Jesus has reached Rome. According to the Roman historian Suetonius, this was when Claudius expelled all Jews from Rome because of social upheaval "on account of a certain Chrestus"--probably a misspelling of "Christus" or "Christ" (compare Acts 18:2).

Testimonies and Traditions of a Risen Messiah (49-55 CE) Testimonies and Traditions of a Risen Messiah (49-55 CE)

Around 49 CE, Paul pens the oldest surviving written references to the resurrected Jesus in Galatians and 1 Thessalonians. His letter to the Galatians, written in 49 or 53, refers to Jesus as the one "raised from the dead" (Gal. 1:1). The Thessalonian epistles, written in 50 and 51, urge believers to "wait for God's Son, ... the one that God raised from the dead" (1 Thess. 1:10). 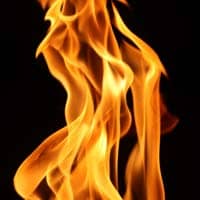 On July 18, 64 CE, a fire breaks out in Rome. The initial flames were probably the result of an accident in an oil warehouse. Fanned by summer winds, the inferno engulfs the city for six days and seven nights, scorching seventy percent of the city.

According to the historian Tacitus, "A rumor had spread that, as the city burned, Nero stepped onto his private stage and sang.... To stop the rumor, he falsely charged...the people called Christians, who were commonly despised for their superstitions.... They were covered with skins of beasts, torn apart by dogs, nailed to crosses, burned alive--then, as each day drew to a close, they would be turned into torches to illuminate the night." 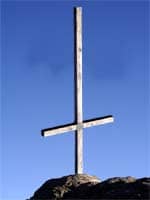 In the aftermath of the fire, the apostles Peter and Paul are executed. According to tradition, Paul is beheaded, while Peter--unwilling to die in the same way as his Lord--is crucified upside down.

During Nero's persecution of Roman Christians, Peter's interpreter--a young man named John Mark--records Peter's retelling of the life of Jesus. This text becomes known as the Gospel According to Mark. According to an early church leader named Papias, relating what he had been told in the first century, "Mark, who became Peter's interpreter, wrote accurately as much as he remembered--though not in ordered form--of the Lord's sayings and doings." In 68 CE, the Roman Senate declares Nero a public enemy; Nero flees the city and commits suicide. Four emperors vie for the throne before Vespasian is named emperor of Rome in 69. During this time of political upheaval, Jewish revolutionaries conquer and hold the city of Jerusalem.

According to some reports, Christians flee northeast during this time, to the city of Pella. In 70 CE, Vespasian's son Titus leads three legions of Roman troops to retake Jerusalem. The Jewish temple is burned. The historian Josephus writes, "The Romans ... slaughtered everyone they caught, setting fire to the homes where Jews had fled ... until corpses clogged the streets. The city ran with so much blood that it was the blood of the Jews that quenched the fires in the houses." In the aftermath of this tragedy, the Christian and Jewish faiths increasingly separate into two different groups. 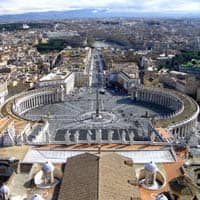 By 100 CE, the Roman Empire spans more than 2,000 miles from east to west and commands the allegiance of 181 million people. Christian faith has found its way to most major population centers, perhaps even reaching India and Spain. Yet Christianity remains a minority sect. Fewer than one million persons--less than one percent of the population of the Roman Empire--claim the title "Christian." External persecution and internal squabbles fragment many Christian congregations during the second and third centuries.

Still, the sect continues to flourish, eventually becoming the dominant faith of the empire.

Today, nearly two billion people throughout the world describe themselves as Christians.

- Images of Jesus Through the Centuries