Speaking with the (Cast of) 'Almighty'

The modern-day Noah's Ark comedy "Evan Almighty" hits theaters nationwide June 22, but two weeks before that, Universal held its press junket and movie premiere--complete with a Christian rock concert, "Rock the Boat," benefiting Habitat for Humanity--at its studios in Universal City, Calif. In the movie, a sequel to the Jim Carrey comedy "Bruce Almighty," Congressman Evan Baxter (Steve Carell), who's visited by God (Morgan Freeman) and told to build an ark, gather animals, and... you know the rest of the story. During the premiere weekend, at press conferences and a "green" carpet event, the film's stars--Carell, Lauren Graham, and Wanda Sykes--along with director-producer Tom Shadyac and Jon Foreman of the the Christian rock group Switchfoot were on hand to give their opinions this "comedy of epic proportions," as the movie bills itself. 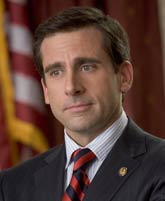 One of the film's themes is doing acts of random kindness. What has been your most recent act of kindness?

Steve Carell: I picked up some garbage that I had [found] on the ground, and I will stay with that. I honestly think it can be something as small as that, and those small random acts add up over time. And, you know, they might seem small in the moment.
Lauren Graham: I think that, by definition, that kind of thing is not something that you brag about later. I think that takes the good out of it somehow. So, I just think it should be little, simple things.

Something somebody did for me today, is my manager (John Carrabino) just sends me text messages saying, "You're the best. No one's better." And that's a lie, because how many people are better? But, he even sends me these sort of, like, Up With People messages, and they really make me happy.

Wanda Sykes: Just the parking meter. You're putting the quarter in and you see your neighbor's meter, whatever, is about to run out, I'll say, fine, it's just a quarter. Give the guy an extra 15 minutes, whatever. Just little things like that. But, you know, unless he's inside robbing a bank. Then it backfires.

Jon Foreman: There's a random thing that we do every year that... means a lot to us. It's called the Switchfoot Bro-Am, and it ties music and surfing in with the community that we grew up. All the money goes to benefit--this year [it] goes to Care House (Life Ministries). It's just a location organization that helps homeless kids (in) downtown San Diego. So it's great to think that surfing and music could actually not only be a part of keeping us out of trouble, but maybe helping other kids keep out of trouble, as well.

If we could speak to God right now, what do you think he/she/it would warn us or say?

Tom Shadyac: If we could speak to God today--well, if I could speak to him, I'd say, "Why did this cost so much?" [According to the IMDB.com, the film had an estimated budget of $175 million.]

What do I think he would warn us? Well, I think he would say, "I've already warned you," you know? I once had a dream about Jesus. He looked me dead in the eye. I was very young, and he said, "I never knew you," you know, right into the gut and the soul. It's already out there. It's been said. I don't think he needs to say much more. We need to listen to what's been said. We need to incorporate and act on what's been shown us through the lives of others and through the written Word.

Sykes: I think a lot of it, so much. There's just so much he could hear. I mean, of course, the message. I'd say, just need some love, you know? Just let them feel a loving place right now.

Were you worried about being part of a movie that had a religious connotation to it, or possibly being type-cast later?

Carell: No, I don't think so, because--I mean, I saw it as a fable. I think the movie is what you want to take away from it, and it just depends on who you are and where you come from.

Graham: I didn't. I never think of things like that. When I was up for "Gilmore Girls," some people were like, "Well, don't you worry about playing a mom, because you're kind of, you know, young to do that?" And I (said), "I didn't even think about it like that. I just kind of connected to the character, and I didn't think about, the network or the message.... When you're the actor, you're just thinking about the person and not kind of the results.

And I mean, "Bruce Almighty" [to which "Evan" is a sequel] had similar kind of themes in it, but it came out in a really different way. So, to me, this just was a movie that is actually for everybody.

What was your favorite scene in the film?

Carell: Boy, there were so [many]. There were scenes that I thought were funny. There were scenes that I thought were heartwarming. I really enjoyed doing the scenes with Morgan Freeman. You know, when he brings me to the top of the mountain and we're looking down on what was this sort of pristine valley, and then he reveals it to be where I live, it's a housing development, and how things have changed, and what we're doing to the planet. You know, that really struck a chord with me. And he has a way of performing that is so natural and so heartfelt that I just like being around him.

What do you want the audience to walk away with from this film?

Shadyac: Everything I do is a reflection of where I'm standing or something that I believe in. So, I, as a storyteller, want to spread that. I took a journey in my life. I've had a great deal of success... I'll say blessed and cursed, because they go hand-in-hand with the money and the this and the that. And I think it can be very deceiving.

And, because I was an idolater of magnitud--oh, the bigger the house, the money, the thing--and I had to learn about the personal change. So this for me is an expression of that, and do I want people to take that specific message away? If it speaks to them, yes. If the two-by-two (message) speaks to them, yes.

Hopefully, there's enough here where we can meet people right where they are.... I think art is best when this great thing works through us, and we don't even know what we're doing. That's my personal journey, but how many other journeys are involved in this web?