The stars and creators of the new inspirational family film 'August Rush' talk about the new movie. 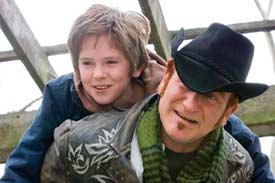 When the title character in "August Rush" travels from a rural orphanage to the traffic-clogged streets of Manhattan, he turns a melting pot of panhandlers, taxi drivers, and general metropolitan grit into his own rousing symphony. By the end of the film, August, 11-years-old and played by the preternaturally wise young actor Freddie Highmore ("Finding Neverland"), is conducting real musicians in a magically lit evening concert, millions tuning in, on the great lawn in Central Park.

Yes, I've given away the ending (or some of it), but if you've seen the previews for this new family film, which opens on November 21 and plays like "Oliver Twist" meets "Little Man Tate," you can probably guess the outcome.

"Fairy tales are predictable--they have to be," says Jonathan Rhys Meyers, one of the film's stars.

He is speaking with reporters at a recent press event in New York. He is joined by co-stars Kerry Russell and Freddy Highmore, director Kirsten Sheridan, composer Mark Macina, and the panel of writers and producers (four, total) who were tasked with creating the film over its 10-year gestation period. Unlike so many of these press gatherings, this group of film folk doesn't shy into private corners to avoid the reporters--Russell grabs lunchtime french fries in the same room we do--and they seem to genuinely like each other.

What's impressive about "August Rush" is that, despite passing through the hands of numerous writers--characters were added, back story was squeezed in, a final sequence involving a Harlem Church Choir was created--the finished project is cohesive and often graceful. ("You always cross your fingers when a project is handed off," says writer Paul Castro.)

"It was so magical we needed some honest raw emotion underneath it to support the magic," says Sheridan, the director, of "August Rush." She had previously co-written "In America" with her father Jim, and seems to know how to blend magic with the tribulations of real life. "Characters as heroes are often all external. I love the idea that the hero is much softer and more internal, and more emotional. That is a heroic quality that we forget," Sheridan says.

In the film, Rhys Meyers stars as August's long-lost father Louis, an Irish rocker who meets and falls instantly in love with Julliard-bred cellist Lyla (Keri Russell). Their one-night union--on a New York rooftop, while the character we will later meet as Wizard (Robin Williams) strums guitar below--results nine months later in a baby boy. But by that point complications have separated Lyla and Louis. Lyla's father has put the baby up for adoption and led his daughter to believe him dead. It is ultimately August's passion for music and determination to find his parents that bring the trio together.

"I totally buy into these kinds of movies," Russell says. "I like to feel like there's something ushering us all along, protecting us."

Though Russell, Highmore, and Rhys Meyers don't appear onscreen together until the movie's final moments, there was plenty of onset bonding, unsurprisingly over music: Russell had to learn the cello, and Highmore, 15 now but 14 when the film was shot, studied both guitar and composing.

"I didn't want to pretend to conduct and wave my arms around, I wanted to do it properly," Highmore says, adding that "when you're feeling down or feeling happy, music is always there to support you in those times."

The character of August was inspired by two personal stories: producer Richard Lewis' son, who was moving his hand in time with Macina's score of "Moll Flanders" moments after birth, prompting nurses to joke "he's a composer already!" Then there was Castro's nephew, a musical prodigy. The story took shape when writers suggested adding flashbacks of August's musician parents and, finally, the character of Wizard, a former street urchin who nurtures August and then tries to trap him. Writer Nick Castle, who frequently collaborates with Williams, describes Robin Williams's Wizard as "more Bill Sykes than Fagin."

The project was ultimately structured in the editing room, as Sheridan made sure the shots that established the disparate locales of each protagonist (Lyla in Chicago, Louis in San Francisco, August in New York) were wistful without being syrupy.

But does a movie with undeniable sentiment have a place in modern cinema? It's a question many journalists are asking, and the elements of "August Rush"--an estranged family, magical coincidences, music all around, even in a wheat field that August "conducts" as the movie opens--could have amounted to the film equivalent of a toothache.

"People were saying, this is either going to be the worst movie ever," says producer Lewis, not finishing his sentence. He doesn't voice the alternative, but does add: "It's a fable, but it has to be real."

"There's a lot of hard-hitting movies out there," Rhys-Meyers says. "August Rush really has its place because you can't watch that kind of movie all the time and people don't want to. I love that the kids finds his parents, I love that the parents find each other, I love that there's no intense cruelty, that hope wins out, and that pain is something that can be overcome."

Though working with a child actor can strain some actors' patience, Russel says that Highmore is "not a creepy kid actor--and they can be creepy." Adds Rhys-Meyers: "He's got great empathy for people, and I think that makes him very attractive as an actor and as a human being. He's the heart and soul of the film, if Freddie doesn't work it doesn't work, he is this movie. We're just here to support the story."

For his part, Highmore, remains poised throughout a press conference that culminates with questions about whether kids at school treat him like a freak, and whether he's planning on starting a family of his own soon (no and no).

"I guess it is somewhat fantastical," Highmore says of the movie. "But it's not so unbelievable that three people who love each other end up in the same place. Many people in life find someone who they think they were meant to be with, and they know, you know, 'Out of all the people in the world that's the one for me.'"