On July 17th, audiences around the world will finally get their wish and see Ant-Man on the big screen with Paul Rudd staring in the lead role. 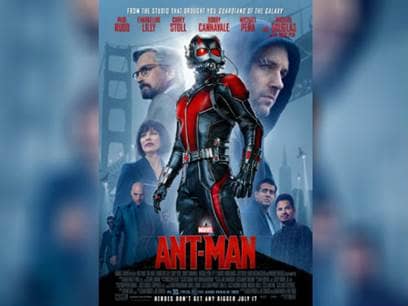 The world knows him as Scott Lang but the people he’s helping know him as Ant-Man. Like many superheroes, Any-Man is an individual out for redemption – he had a rough start in life but he’s making efforts to do good. Lang is a reformed thief and an electronics expert.

The fictional character is a product of Marvel Comics. His story writes him to be born in Coral Gables, Florida. When his position as an electronics expert failed, he turned to burglary as an occupation. He couldn’t run from the law forever and eventually was arrested and convicted – after serving three years in prison, he was released on parole for good behavior.

Cassie Lang, Scott’s daughter, became seriously ill and with no other avenue to turn Scott turned back to burglary. During one of his criminal endeavors, he broke into Dr. Hank Pym’s home and stole his Ant-Man suit and shrinking gas canisters. Soon, using the Ant-Man suit, Scott broke into Cross Technological Enterprises and sought out a doctor to help his dying daughter. She was able to help his daughter and later when Scott went to return the suit to Pym. However, Pym was aware of Scott’s situation and his intentions and he granted him ownership of the suit as long as he agreed to use it for good and uphold the law.

Ant-Man made appearances primarily to assist Iron Man and the Avengers. In comic books, Ant-Man was even hired briefly by the Fantastic Four to assist as a technical consultant.

Every power has a super power and Ant-Man’s ability to shrink to a sub-microscopic size was one of his main advantages. He uses a gaseous form, kept in a compartment in his belt, to shrink down to the size of an ant and again to return to normal. Overtime, he acquires the ability to change size at will and uses his cybernetic helmet as a telepathic device to communicate with insects. While he was in the suit humans were unable to hear him and he retained his normal strength while in ant size.

On July 17th, audiences around the world will finally get their wish and see Ant-Man on the big screen with Paul Rudd staring in the lead role. The film also stars Michael Douglas, Corey Stoll and Evangeline Lilly. The movie is co-written by the infamous Stan Lee and is expected to be a summer blockbuster for 2015.