We Can Have Hope and Faith in Dire Circumstances

“The 33,” is a film based on the Chilean miners trapped in a 100-year-old gold and copper mine. It teaches us to hope even against hope. 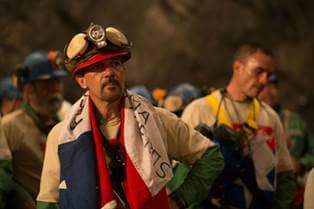 Antonio Banderas and Lou Diamond Phillips star in “The 33,” a film based on the Chilean miners trapped in a 100-year-old gold and copper mine. As the world held its breath for 69 days, it was the families of the 33 men trapped demanding that the owners and the government take action.

An international team worked together to free the miners on the brink of dehydration and starvation. The men fought daily below ground to remain sane by joking, dreaming of having fun with their kin, and praying together to create normalcy in chaos.

Charismatic Mario Sepulveda was part of creating the best environment during the darkest moments.

Banderas plays de facto leader Sepulveda, who becomes a natural leader after the mine collapses. He is given the key to a food locker with just a few cans of tuna, and needs to ration it out among the group. They cherished the tiniest morsel of good. The  “simplest things are the most important for all of us,” said Banderas.

The film shines a light on the mining industry that is responsible for an estimated 12,000 deaths per year. Phillips is shift supervisor Luis Urzua. He already warned his supervisors of the dangers of the mine. He is blocked by politics to achieve what is needed to keep the men safe, until it was too late.

“This movie is life-affirming,” said Phillips. "There is hope, there is inspiration, and an absolute tribute to faith in every frame. We are not manufacturing heroes in this film. We are simply shining a light on real people who became heroes.”

For Banderas, Sepulveda taught him another lesson about surviving. If there was ever a catastrophic event he would want a motivator like Sepulveda leading him.

“If I ever get lost without any resources, I would love to have a Mario Sepulveda with me. He knows how to get out of a tough situation, and not to lose control.”

Underground, the miners became a family, and became each other’s heroes--despite differences. They remain that today.

Sobering as it is, the mine’s owners knew that the mountain had weakened, and were warned by employees of the dangers. Safeties that were in place were ancient or unfinished. Although this story ended well, the mining company was never prosecuted.

"The key for me was that the efforts to rescue the miners were successful because the families pushing the government to do something. When you get the whole picture, it says so much about love and the value of individuals. It’s a celebration of life," Banderas offered.