Whether you’re a Superman or Batman fan, there’s no doubt you’ll be incised to see Dawn of Justice. It’ll be interesting to see how Snyder and his crew depict each superhero and make it all work together. 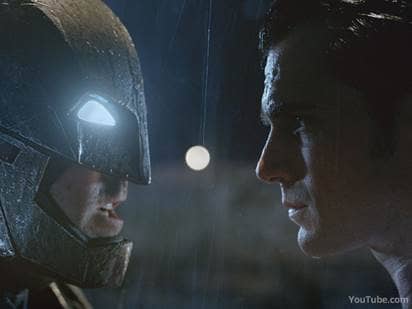 The superhero debate of Batman versus Superman has amused comic book fans for decades. Who would win the epic battle? Would the Man of Steel succumb to a man acting out as a vigilante? Or would the Caped Crusader fulfill his destiny and overcome all things kryptonite? One thing is for sure, on March 25, 2016 we’ll all bare as witnesses to the Dawn of Justice. Before your comic book dreams come true, there are a few things every super fan should know.

The Batmobile – Batman can’t fight the scum of Gotham in just any old vehicle. Tim Burton and Joel Schumacher upped the bad boy anti with their versions of the batmobile. Director Zack Snyder found a design that marries Burton and Schumacher’s flash and Christopher Nolan’s batmobile tank. Apparently rumors have reported it’s fully armored, equipped with anti-ballistics devices, is stealth capable, weighs in at 7,000 pounds and can reach speeds of 205 mph. Batman has always been against killing people which makes the presence of a gun turret an interesting accessory.

Wonder Woman – Wonder Woman will play a major role in the film. Rumors have reported that actress Gal Gadot has signed on to put on her armor for three films – Batman v Superman: Dawn of Justice, Justice League and a Wonder Woman solo film. Wonder Woman will be portrayed as a goddess – being the daughter of Zeus. Snyder makes sure to make her entire back story clear – also that she’s hundreds of years old.

It’s Not a Sequel – Many fans and bloggers online have wondered whether or not the upcoming Batman v Superman flick would be a sequel to Man of Steel – the answer is no. Even though the majority of the cast has returned, the Superman solo film sequel is supposed to hit theaters before 2020. Snyder has not commented on who will get more screen time, Batman or Superman.

Retirement – In this film, Batman will be retired from combative duty. However, when Superman and General Zod duke it out in Metropolis, Bruce Wayne feels compelled to suit back up because of Superman’s potential threat.

Suicide Squad and Justice League– Batman v Superman will serve as the gateway film for upcoming DC comic films. Unlike Marvel, DC never sold its characters to multiple studios therefore; WB owns ever character the publisher has developed. The Suicide Squad hits theaters later in 2016 and will build up the Batman and Joker history.

Batman the Actor – Christian Bale was originally offered the role to play the infamous vigilante again. He turned down $50 million to return for a fourth time. Ironically, Ben Affleck was originally offered the director position in Man of Steel, however he turned it down because he didn’t feel comfortable working with so many visual effects. It’s reported that the Batman contenders included Ryan Gosling, Richard Armitage, Orlando Bloom, Armie Hammer, Josh Brolin, Luke Eans, and Joe Manganiello.

Robin – Snyder and his crew have not confirmed if rumors circulating around the reprise of Carrie Kelly are true or not. In Frank Miller’s The Dark Knight Returns comic book series, a young girl named Carrie Kelly takes on the role of Robin and wears a bright red hair-do. According to many sources, actress Jena Malone was photographed on set wearing newly dyed red hair. It’s thought that she will portray the role of Robin in the film.

Whether you’re a Superman or Batman fan, there’s no doubt you’ll be incised to see Dawn of Justice. It’ll be interesting to see how Snyder and his crew depict each superhero and make it all work together.