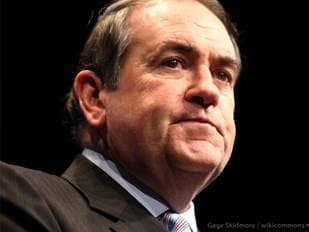 This is the reason the former Baptist pastor endorsed the inspirational drama "GOD’S NOT DEAD 2" before the Iowa caucuses.

Our freedoms are at stake this election as government restrictions are putting a stronghold religious freedom, now is the time to stand up. Inspiring people through films works.

"GOD’S NOT DEAD" encouraged this when it came on the scene shocking Hollywood with its $60 million in revenue—the highest grossing independent faith film in 2014.

Huckabee, who makes a cameo in the film, was drawn to the first movie that spotlights the cultural attacks on the Christian faith.

“The first film was powerful and inspirational for believers, and when the second one was coming and they asked me if I would do a cameo role, I was ecstatic,” Huckabee shared, who admitted being in a film was on his bucket list.

“I thought this one [film] was even better,” Huckabee said after previewing the movie before the Iowa contest.

“The story is also intense, suspenseful, and has all the elements for a solid movie with a few moments of comic relief. I think there is an enormous hunger in the market place for people who want to see wholesome films.”

These films also need to have a high production value. If you are going to do a film with a strong Christian message then it has to be superior quality for believers and a secular audience.

Producer David A.R. White of "GND2" has stepped up the game of the whole Christian film genre said Huckabee.

“This is not a film to be shown at church on Sunday night. This is a major theatrical film that you buy your ticket, you get your popcorn and you sit there in a regular cinema. You watch a very well-done movie. It also has a message that touches you.”

The film is about a history teacher under attack for her faith in the classroom after a student asked for the comparison between Mahatma Gandhi and Dr. Martin Luther King’s beliefs to Jesus’ teachings. A civil liberties group goes after the teacher for violating the separation of church and state.

It’s a situation that is not only plausible, but timely, Huckabee offered.

“I appreciate films like this because they’re realistic. The takeaway I got from it was that our religious liberties are being taken away from us, and are under assault. We have the ability to win if we stand up. But a lot of people don’t want to stand up because the price to pay is too high. A lot of pastors don’t want to get involved, because politics is dirty and all of this stuff is none of our business.”

However, it is all of our business. Overreaching legislation and overreaching court decisions are taking away fundamental rights like freedom of speech and freedom of religion.

Pure Flix founding partner Michael Scott said in a presser: “Our hope is that we can start a conversation in the country with this movie about how critical the right to believe, and to talk about that belief in public, is to our nation.”

"GOD’S NOT DEAD 2," reuniting the creative team behind the original, is directed by Harold Cronk (GOD’S NOT DEAD, JERUSALEM COUNTDOWN) from a script by Chuck Konzelman and Cary Solomon (GOD’S NOT DEAD, DO YOU BELIEVE?). Michael Scott, David A.R. White, Brittany Lefebvre and Elizabeth Hatcher-Travis and the late Russell Wolfe are producers.

"GOD’S NOT DEAD 2" will open in theaters nationwide April 1.