Pete Docter: Inside the Mind Behind Inside Out

Inside Out gives us insight into how kids think - from the makers of Up and Frozen, Disney helps us understand the complex emotions everyone experiences, and sometimes overwhelmingly. 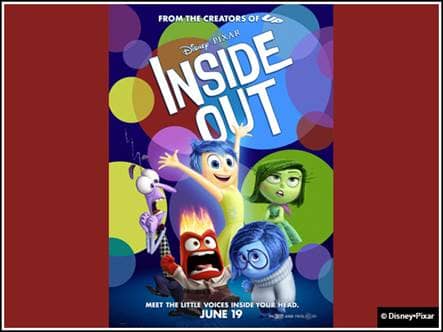 When Ellie Docter was nine years old, she was outgoing and fearless. A cheerful little girl, game for adventure and prone to fits of uncontrollable joy. She was, according to her father Pete, just like the character of “Young Ellie” that she’d voiced in her dad’s Academy Award-winning film, Up.

By the time she’d reached eleven, though, “Young Ellie” wasn’t quite the same. In fact, in many ways she’d become almost a different person. More introspective. A little withdrawn. Kind of self-conscious. Even somewhat shy.

And so one day Pete Docter looked at his daughter and thought: “What is going on inside her head?”

That seed of parental concern stuck with him until it became the inspiration for his film, Inside Out, and voila! Another blockbuster movie from Pixar Animation Studios was born.Eight seasons followed by years and years of contract negotiations and finally on June 3, 2015 The Entourage movie will hit the big screen and become a reality for fans all over the world. However, since it may seem like a short eon since the HBO series ended let’s catch up and figure out where it all ended.

Ellie Docter had to wait until she was sixteen years old before her dad could finish the animated feature film that she’d inspired.

It took Pete, and Pixar, about five and a half years to make Inside Out the way he envisioned it. He was assisted by an all-star voice cast (featuring Amy Poehler and Mindy Kaling, among others), and a crew that eventually swelled to about 350 people. When they were all done, they’d produced a captivating story of an eleven-year-old girl named Riley (based on you-know-who), a child who is “uprooted from her Midwest life when her father starts a new job in San Francisco.”

What’s especially fun about Inside Out is that Docter gives a peek inside Riley’s mind as she goes through the transition from Minnesota to California—and from childhood to adulthood. We see her emotions portrayed as real-life characters named Joy (Poehler), Sadness (Phyllis Smith), Fear (Bill Hader), Anger (Lewis Black), and Disgust (Kaling). We see Riley’s memories, pictured as beautiful glass globes tinged by the colors of her emotions. We see her imaginary childhood friend, Bing Bong (who cries candy caramels for tears when he’s sad!) and view the entire “Head-quarters” of Riley’s mind. It’s fascinating and imaginative—something you’d expect from the acclaimed director and writer behind previous Pixar hits like Monster’s Inc., Up, and Toy Story.

And Young Ellie Docter? Well, she sat this one out.

Despite his daughter’s unmistakable influence on Inside Out, Pete says, “We didn’t really consult with her along the way”—though she did get a chance to see a “not-quite-finished” version of the film before its 2015 release. “She was pretty much like, ‘Eh, good movie, Dad,’” Docter reports with a laugh. “I don’t know how much she is internalizing how she affected it. We’ll see, I guess, in the long run.”

For Inside Out, Pete Docter drew from the deep well of his own experiences as a lonely, confused kid from Minnesota. “There must be something for me that I still haven’t quite put to bed about growing up,” he says, “and the difficulty of that that makes it still intriguing.”

When he was a boy, Docter explains, making friends was a struggle. Young Pete often felt like an outsider, even in his own school and in his family’s church. “I think that’s part of the reason why it freaked me out watching my daughter go into that place,” he says, “because I remembered being in some dark places myself in junior high.

“I don’t think I—literally—went over to anybody else’s house from like eighth- to tenth/eleventh-grade. I just didn’t really have friends. I didn’t know how to engage with people. I was kind of shy and gangly and awkward, and so I would escape and draw in my room. I think that’s really the reason why I got into animation, because I had something I wanted to say but I didn’t know how to speak to people. So I know that that’s a really difficult time for a lot of folks.”

Fast-forward to today and that shy, awkward kid is using the relationship lessons of his lonely childhood to engage the world with Inside Out.

“The thing that’s the most important to us as humans … is relationships,” he says about making this movie. “I sort of had this realization that the people that I feel the deepest connection with are beyond just folks that I’ve had a good time with—that we’ve gone to Disneyland together—but also things, people that we’ve shared intense sadness…People that we got to work with here that I’ve been scared for, that I’ve been angry at. All these things that don’t always feel positive at the time, I think, establish the deepest connection with each other. And so that’s ultimately where we set this film. It’s about that kind of thing.”

For Pete Docter, his personal relationships extend beyond just his friends, family, and co-workers.

“I know some people say Jesus is a great teacher, or whatever,” he says. “[But] I think there’s something fundamental to the Christian faith that speaks to the core of who we are. By that I mean, some people say that plot is the most important thing in film, or in stories. Other people will say characters. I feel like it’s relationship … To me, that’s what really motivates you to change, to grow. It’s what is the most important thing in most of our lives, these relationships that we have with other people. I think that’s what Jesus brings: A personal relationship with God that is really unique. It’s the only sort of religion that I know of that offers that.”

“Yeah, I’d call myself Christian,” he continues, “although I sometimes feel like I’m not really deserving of that … Out here, there’s kind of a judgment against ‘Christian,’ because people grew up in judgmental societies and for various reasons—probably legitimate reasons—they feel a negativity towards that, which I get. But I think, even those people, if they were to sit down and study more deeply what is at the root of this faith, it’s pretty remarkable.”

Still, Docter didn’t make Inside Out to preach about his religion. He made it to entertain, to bring people together, and to maybe share a little truth about life and love and hope and more.

“Obviously you want it to be fun and entertaining and colorful and enjoyable,” he says, “but hopefully you want to dig deeper to find something more substantive, and have the time to develop that so that it’s meaningful and comes across.”

He adds, “The heart of Inside Out is about childhood and growing up and becoming adult, which is, I think, one of the more difficult times in all of our lives—trying to figure out ‘where do I fit in the world?’ and ‘how do I carve out my own space?’ You lose something at that moment. Childhood is lost, and you can’t go back. That’s what makes it a worthy, deep, meaningful subject.”

He pauses to collect his thoughts, ruminating about the universe he created inside Riley’s head—that imaginative place where he explores deeply the inner workings of childhood, adulthood, and even personhood. “That whole world is made up,” he says at last, “so we wanted to make it as truthful as possible.”

And what about his world? What truth does the mind behind Inside Out want to share with those of us in living out here in real life?

“Invest deeply … Even if it ends in heartache,” he says firmly. “Put your whole self into it. Whatever it is.”

BONUS! Insider Secrets in Inside Out

Because Inside Out is a Pixar film—and because Pixar folks like to have fun—director Pete Docter has hidden a few insider secrets for us to discover in Riley’s made-up world. Here are just a few:

• “At the beginning of the movie when we’re watching Riley growing up … There’s a magazine that’s on the table, and it’s a cooking magazine. On the cover is Colette from Ratatouille.”

• “There’s three separate scenes that I know of, and probably more, where [the Pizza Planet Truck] shows up…Right as Joy is first chasing after Bing Bong, look around there. That’s the easiest one to spot.

• “Most of [Riley’s] background memories that you see on the shelves are actually shots from the ‘married life’ sequence of Up! So if you look really carefully you can see, oh there she’s straightened a tie, there’s Carl and Ellie, or breaking the jar, or things like that.”

Mike Nappa is an entertainment journalist at FamilyFans.com