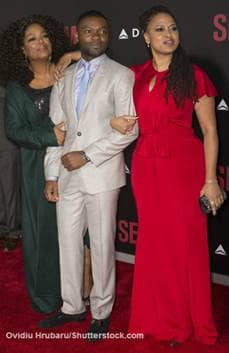 She is also only the second black woman accepted into the Academy of Motion Picture Arts and Sciences (director division), and only the fifth time a female director was nominated. The Globes are given in recognition for excellence in both film and television, domestic and foreign by 93 members of the Hollywood Foreign Press.

The film is based on voting right marches from Selma, Alabama to Montgomery in 1965 led by James Bevel, Hosea Williams, John Lewis and Martin Luther King, Jr. it began on “Bloody Sunday” where police attacked peaceful marchers on their journey to Montgomery. It will be the first bio picture made on King, and was interestingly financed by French backers.

The Globes have progressed slowly in recognizing women and black women.

“I thank the journalists that are in it now that decided to include me with such a wonderful list of directors, but yeah, the organization’s been around since 1943 so there’s a lack of progress there,” the 42-year-old reflected.

“It’s nice that they’re catching up to it, but I know that I’m not the first black woman deserving of this honor, so I stand with a lot of women behind me who helped this moment happen.” Although not a 100 percent accurate, usually the Golden Globes are precursor to what the Oscar nominees will be.

DuVernay won best director with “Middle of Nowhere” at the 2012 Sundance Festival.