An Exclusive Peek at Monuments Men

“The story is so fascinating and untold,” said Bill Murray. Many may not know it, unless you’ve seen or researched the film, that the Monuments Men played an imperative role in ending the war. 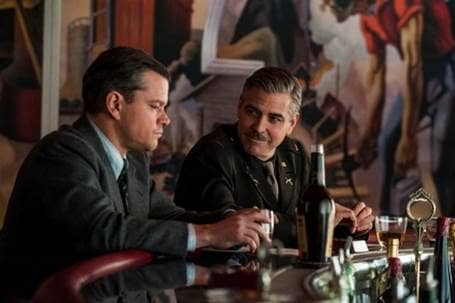 “You try to shine a light on issues that need a voice and to be told,” said George Clooney as he talked about his latest film Monuments Men. The movie is based on a true story and the courageous acts of the Monuments Men during World War II as they fought to preserve and protect the arts.

The cast feature Hollywood’s best - Matt Damon, John Goodman, Bill Murray, Cate Blanchett and George Clooney playing the role of actor and director. “It’s hard to make films like this. We’re trying to do films that are not necessarily easy to make. We want to make films of stories that wouldn’t normally be made,” said Clooney.

Monuments Men helps shed light on the crimes centered on the German’s stealing a piece of history – the arts. Thousands upon thousands of pieces of art were stolen and the Monuments Men sought to return the art to their rightful owners and save a giant piece of history. The story takes place during the Holocaust and the film does a great job of balancing the recognition of such a hellacious time while maintaining the major aspect of the film that is centered on the arts. Clooney is able to pay tribute to those who lost loved ones or lost their own lives in the Holocaust, while displaying the bravery and resilience of the Monuments Men.

“The power of the story sheds a light and great perspective on well known facts. The power of cinema draws on that collective history,” said Cate Blanchett. She adds that the film opened a door for us to see events that we would not otherwise have been familiar with, so that we can view our contemporary history.

“The story is so fascinating and untold,” said Bill Murray. Many may not know it, unless you’ve seen or researched the film, that the Monuments Men played an imperative role in ending the war. They were part of the group that found all of the German gold. Finding the German’s financial means meant that they were no longer able to purchase items to continue the war. Historical events like that are re-enacted in the film and help tie history timelines into place.

The film is able to display how important the culture is to society, while remaining tasteful and truthful. Clooney and his team did a remarkable job. While the film is not a blood bash, like other war films, Monuments Men helps shine light on a story that may have otherwise remained in the dark. Monuments Men allows others to see firsthand the brave soldiers that fought to keep our history alive.