The top movie nuns, from Julie Andrews' Maria from "The Sound of Music" to Meryl Streep's Sister Aloysius Beauview in "Doubt." 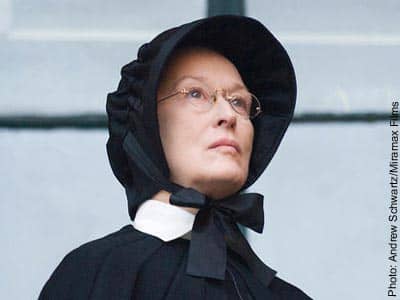 Typically, nuns avoid the spotlight. Few make YouTube videos or try out for "American Idol." They spend their days modestly, often in seclusion, deflecting attention away from themselves and to the One they serve. I can't think of the last time Perez Hilton took an interest in a nun.

So why, then, does Hollywood make such a (ahem) habit of including nuns in its movies? Is it their piety that makes them so compelling? Their ability (or inability) to balance strict lives of obedience with the ever-encroaching secular world? Their fetching headgear?

The legendary Meryl Streep, who plays the forbidding Sister Aloysius Beauvier in "Doubt," is just the latest high-powered actress to step into a habit. Here's a look at some of moviedom's most memorable nuns.

Saint Bernadette Soubirous in 'The Song of Bernadette' (1943) 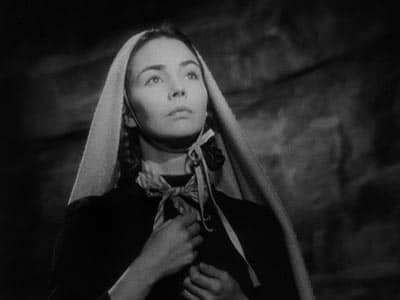 Saint Bernadette Soubirous in 'The Song of Bernadette' (1943)

Jennifer Jones was a relative unknown when she took on the role of Bernadette, loosely based on the life of Saint Bernadette Soubirous. In the film, the Virgin Mary takes an interest in young Bernadette and pays her a series of shimmering visits in a cave near Lourdes, France. Folks are understandably skeptical that Bernadette's suddenly BFF with the Blessed Virgin, but after a healing spring miraculously, um, springs forth in the cave, the Catholic Church decides Bernadette's not only telling the truth, but a saint-in-the-making. Church officials toss her in a convent where she eventually dies of tuberculosis. Unintended moral: If you see the Virgin Mary anywhere, it might be best to keep it to yourself.

Jones won an Academy Award for her uber-reverent portrayal of the saint, beating out such Hollywood luminaries as Ingrid Bergman, Joan Fontaine, and Greer Garson. Word was out that the nunnery was, ironically, a good stop on the way to claiming Hollywood's own golden idol. 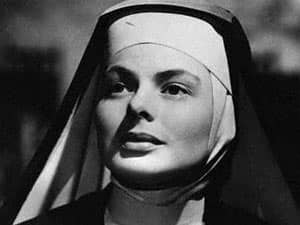 Just two years after she lost the Oscar to Jennifer Jones, Ingrid Bergman found herself cloistered in "The Bells of St. Mary's"—"Doubt’s" sweet-natured cousin. Like "Doubt," "St. Mary's" features a priest (Bing Crosby) and a nun (Bergman) who get on each other's nerves in a Catholic school. Only this time around, the protagonists are ludicrously wonderful people who, at the end of the day, just want what's best for their young charges.

The movie made scads of money (it was the highest-grossing film of 1945) and was nominated for eight Oscars—including for Bergman's performance as a stickball-playing nun. It's still considered one of the best sequels ever (it was a follow-up to Crosby's "Going My Way"), and rumor has it that director Martin Scorsese —yes, he of "Raging Bull" and the cinematic gangland killing—chokes up every time he watches the end. 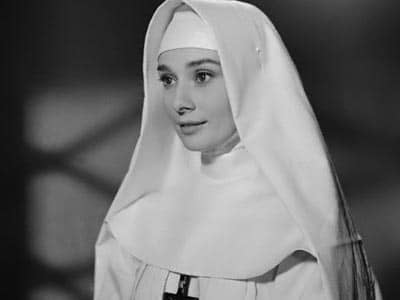 Bergman was initially approached for the main role in this movie, too, but the part of Sister Luke—a nun struggling with her order's strict vows—eventually fell to Audrey Hepburn. "Story" didn’t wrestle with religion as much as it asked whether God might sometimes be better served outside a convent. "When I have night duty I break the Grand Silence because I can no longer cut short a talk with a patient who seems to need me," Sister Luke says. "Mother, why must God's helpers be struck dumb by five bells in the very hours when men in trouble want to talk about their souls?"

The film earned eight Academy Award nominations, including one for Hepburn, but they didn't come without controversy: Sister Luke, shall we say, kicks the habit in the end, which some in the Catholic Church surmised might be bad for recruitment. 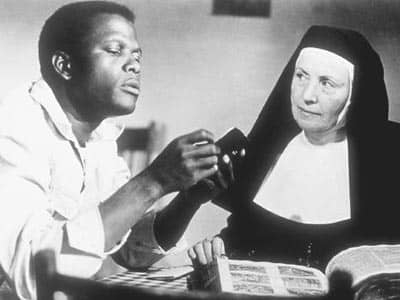 Ironic that one of America's richest movies, spiritually speaking, revolves around a clique of skinflint nuns. But that's the case with "Lilies of the Field." The title comes straight from Matthew 6:28-30, which Mother Maria (Lilia Skala) quotes to wandering handyman Homer Smith (Sidney Poitier) when he asks to be paid for the odd jobs he's been doing around the dilapidated farm of some immigrant nuns. Translation: "You want to be paid? No worries! The check's in the mail ... to heaven!"

Undaunted—and, initially, still hoping to get paid—Smith sticks around long enough to built the sisters a whole blasted chapel. Then he slips away without tendering so much as an invoice. But while Homer left only spiritually richer, the movie broke the bank at the Academy Awards—five nominations (including one for Skala) and one Oscar win, for Poitier. 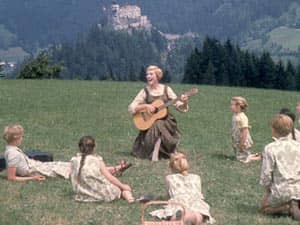 Times, they are a'changing in the convent. In "The Nun's Story," Audrey Hepburn gives up her life as a nun—and leaves the nunnery in disgrace—because, in part, she just can't abide those awful Nazis. But in a movie released six years later, novice Maria (Julie Andrews) skips out on the convent simply because she's fallen in love. The nuns wish her the best of luck—and then set about stripping a Nazi car of fairly crucial engine parts to ensure Maria's safe escape. What is this? "Nuns Gone Wild"?

No, of course not—it's just one of America's best-loved musicals that will never, ever go away (even if some wish it would). It won five Academy Awards (including Best Picture) and was nominated for another five—including Andrews for Best Actress and Peggy Wood (who played the Mother Abbess) as Best Supporting Actress. Seems like playing a nun is a surefire way to get an Oscar nomination, doesn't it? 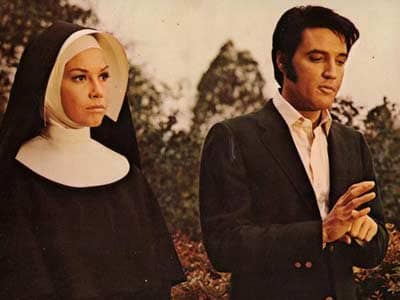 Well, maybe not always. It's doubtful Mary Tyler Moore's name even came up in the Academy Awards balloting for her turn as Sister Michelle Gallagher in "Change of Habit," opposite Elvis Presley in his last fictional movie role.

Habit features Presley as a ghetto doctor and Moore as a plainclothes nun—a volunteer who sheds her habit for fear of scaring the folks to whom she's trying to minister. This leads to a case of mistaken identity—just like those old "Three's Company" episodes, only not as funny—and eventually leaves both doctor and nun all shook up. By the end of the film, Sister Gallagher has a choice to make: follow her vocation or hook up with the dude with the sideburns? What would Audrey Hepburn do? 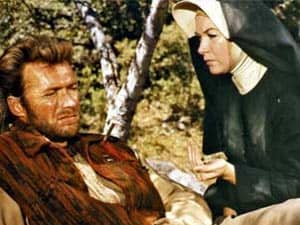 Dagnabbit, if Sister Sara ain't the most unsaintly nun this side of the Pecos, I'll be a hootin', hollerin' hornie toadie. Played by Shirley MacLaine, Sister Sara nearly outdrinks, outsmokes, and outshoots co-star Clint Eastwood in this bang-bang Western, and she may be history's first cinematic sister to appear on-screen almost in the buff.

'Course, Sara ain't really a sister at all, but a prostitute masquerading as one. Turns out, she's trying to help Mexico fight off the invading French, and she manages to blow up an ammunition train and take part in a bloody battle before she and her beau ride off into the sunset together. There's not much of a moral to this story, spiritually speaking: While most cinematic nuns struggle with their vows, Sister Sara never actually took any. Still, it's too bad they never made a sequel: It could've been called "A Fistful of Rosaries." 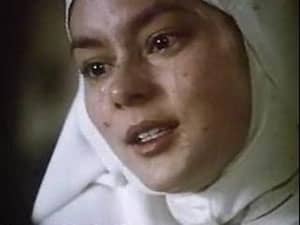 An infant is found dead, strangled. The mother, Agnes (Meg Tilly) is a young novice who swears she never had sex with anyone and can't even remember giving birth, much less how the baby wound up in the wastebasket. Is she lying? Insane? Or—just maybe—did she immaculately conceive?

You won't find definitive answers in "Agnes of God." The film is more concerned with the fractious interplay between science and faith than locking poor Agnes away. Agnes is caught in an existential tug-of-war between secular psychologist (Jane Fonda) and head nun (Anne Bancroft), and all three actresses eventually pull the film all the way to the Academy Awards. Bancroft and Tilly were both nominated for golden statuettes, though neither won. Indeed, while the Academy had been liberal in handing out nominations to cinematic sisters, how many had they won since Bernadette? Nun! Would Oscar ever stop teasing these poor women? 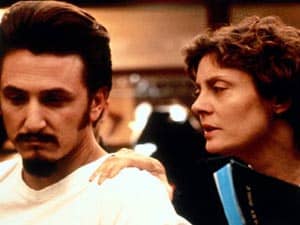 Eight years after playing a concubine of Satan in "The Witches of Eastwick," Susan Sarandon puts on an understated habit for "Dead Man Walking," based on the experiences of real life Sister Helen Prejean.

In the film, Sarandon's Prejean ministers to Matthew Poncelet (Sean Penn), a sexist, racist, unrepentant killer sentenced to death for his crimes. "I want the last face you see in this world to be the face of love," she tells Matthew, "so you look at me when they do this thing." Her nuanced portrayal of the crusading sister earned Sarandon an Academy Award for Best Actress—the first time Oscar's gone home with a nun since 1943. 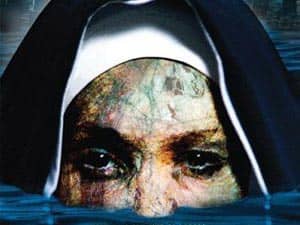 Maybe their habits can be a little freaky. Maybe their whip-quick rulers frightened legions of burgeoning filmmakers. Whatever the reason, more nuns show up in schlocky fright-fests than any other genre—and often, their portrayal isn't all that flattering. Genre experts call it nunsploitation.

Take, for instance, the Spanish 2005 release "The Nun" (teased with the tagline "Not all water is holy"). Seems that a clutch of boarding-school students deep-sixed evil Sister Ursula 18 years ago, and now the spirit of the twisted sister is back for revenge, offing her killers without so much as allowing them confession. Though "The Nun" was a straight-to-DVD release here in the States, rumor has it that Director Luis de la Madrid will revisit religious-themed horror soon with a film titled "Exorcismus." Hope he doesn't make a habit of it. 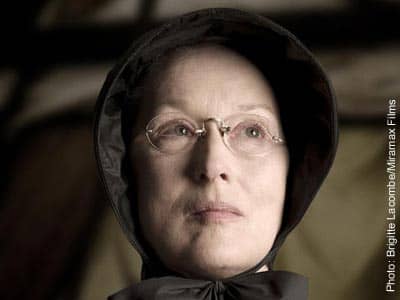 "The students are all uniformly terrified of you," Sister James (Amy Adams) tells Sister Aloysius (Meryl Streep) in "Doubt." "Yes," Aloysius answers. "That's how it works."

With all respect to Sister Ursula, Streep's Sister Aloysius is nundom at its most intimidating. Armed with a sharp tongue, withering glare and a mirthless sense of justice, Aloysius pushes to remove a priest she's convinced is a pedophile. "I can fight you," the priest (Philip Seymour Hoffman) tells her. "You will lose," Aloysius retorts. Not that the priest is a pedophile, mind you. That's sort of unclear. The film takes aim at aspects of organized religion and suggests a little doubt is a good thing—a source of humility and mercy. That said, critics have little doubt that Streep is cruising toward her 15th Oscar nomination. Adams may snag a nom, too.

Jennifer Jones would be so proud.

Evolution of the Movie Vampire

Discuss Media, Culture, and Values in the Community

Top 10 Films to Put Your Faith in Love 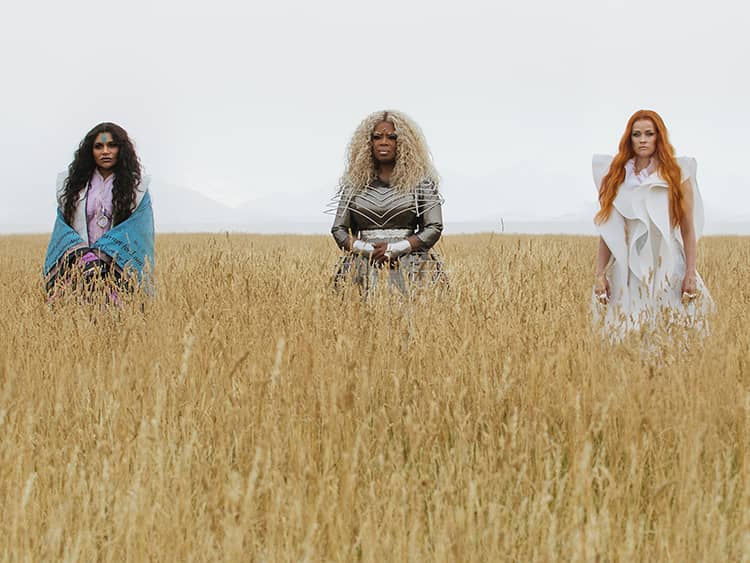 'A Wrinkle in Time' Has an Extremely Powerful Message For Young People
They are worthy. Read next feature >