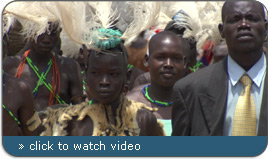 Take a dash of "Spellbound"--energetic young people gearing up for a national competition. Add a bit of "Mad Hot Ballroom"--hours and hours of invigorating dance practice. Now set those stirring musical numbers amidst refugees from civil war in Uganda. "War/Dance" demonstrates the necessity of dancing even amidst the most trying circumstances.

More than two million members of the Acholi tribe have been exiled from their homelands because of the heinous efforts of the ill-named Lord's Resistance Army. "War/Dance" follows the stories of three children amidst the 60,000 refugees gathered at a "displacement camp." It is set against the backdrop of a national music competition, where war orphans from Patongo Primary School hope to compete. Produced by Shine Global to raise awareness and funds for the refugees, "War/Dance" celebrates the power of music and dance to heal our deepest, emotional wounds.

For "War/Dance," the husband and wife team of Sean Fine and Andrea Nix Fine won the award for best documentary directing at the 2007 Sundance Film Festival. Jeff Consiglio's editing juxtaposes the horrors of war with the lush colors of the African bush. The sounds and images are beautiful and haunting. The camera also serves as a confessional for three children, a safe place to reveal the painful realities they witnessed.

We see the prayers of Nancy, as she takes on the role of mother to her brothers and sisters. Dominic wants to grow into Uganda's finest xylophone player. Rose suffers under the hand of her aunt, pining for her mother and her old life. Despite their devastating circumstances, the children practice and perform the traditional Bwola dance with profound hope and joy.

What a genuine, compelling and transformative film experience. For more info about War Dance or how to support children in Patongo, Uganda, go to www.shineglobal.org.
--Craig Detweiler