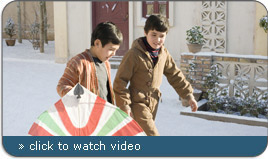 The beloved novel "The Kite Runner" made a successful transition from Khaled Hosseini's pages to screenwriter David Benioff's script to director Marc Forster's screen. From the casting to the film's location in the Afghanistan-like Chinese city of Kashgar, the reader's imagination is on the big screen--be it in an abbreviated way, as most films based on novels are.

The adaptation's achievement is rooted in staying true to Hosseini's vision, giving readers a window into the Afghan culture that wasn't, and maybe still isn't, being depicted in major Western news outlets. The audience gets the ideal visual through the windowpane into Afghan spirituality with four unique characters: Amir, Assef, Baba, and Hassan.

Baba, portrayed by Homayoun Ershadi, stands to the far left of the spirituality spectrum as the most secular character. He believes the true test of a man is to never steal from others, and his prized possession in the diaspora is a small case filled with Afghan soil.

To the right of him is Amir (played by Khalid Abdalla and Zekeria Ebrahimi), who explores Islam as a child through school teachings and what his father, Baba, practices and later finds his faith as an adult.

Amir's childhood friend/servant Hassan (Ahmad Khan Mahmidzada) is more than a few steps to his right, as he embodies the simply devout Muslim without cause or expectation for those around him.

Then at the far right, Assef  (Abdul Salam Yusoufzai) cowers while symbolizing the Taliban as a whole and the extreme interpretation of Islam filmgoers commonly see on their television screens' news shows.

In all, the best spiritual film has to be one where a universal message resonates with the movie audience, where if necessary it transforms from the indie-flick appeal to the mainstream. "The Kite Runner" has done just that. It brought in its reader fan base, and those new to its phenomenon, overcoming the potential to be yet another depressing Middle Eastern movie and rising to become a feature with the ultimate message that one can regain their innate goodness. --Sara Shereen Bakhshian

Let me start by saying that you owe it to yourself to see "The Kite Runner." Perhaps one in 50 films has a scene or image that stays with you for years, if not for life. For me, "The Kite Runner" had two: the scene with the pomegranates and the scene in the back of the truck. The boy who plays young Hassan, especially, gives a performance that is astonishing. And any movie that opens with the line, "There is a way to be good again," signals its intentions to explore deep issues.

The problem with the film of "The Kite Runner" is that all the layered spirituality inherent in the book flattens out and becomes one dimensional. Because you don't witness young Amir's active inner wrestlings, it seems he has none. It seems to the audience that he is exactly what his father claims he is--a boy who doesn't stand up for himself or others. Time and again you see him failing in this regard. In fact, I wondered how he could be good "again," because he had been milquetoast from the start. Because you only see his abdication of responsibility without understanding his inner searching, when he depends on a young boy to save him yet again near the end of the film, it seems horrifying. I wanted to yell at the screen, Have you learned nothing?

The scene of his confession of sins at the mosque served as yet another chance for the character's self-chastisement. That's one thing he's gotten down. It's change and growth we need to see, and we never do, really. Sure, he finally talks back to his father-in-law, but does that qualify as "being good again"?

"The Kite Runner" succeeds as a memorable film, especially because of the devotion of those surrounding the main character. The one resonance the film lacked was Amir's spiritual center, which would have been the center of the film.
--Sharon Linnéa