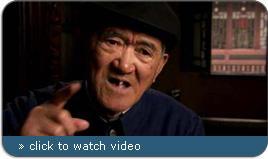 The brutal "Nanking" focuses on a group of World War II-era American missionaries, professors, and doctors, along with a German businessman, who stayed in that formerly vibrant cosmopolitan Chinese capital city during the Japanese invasion of 1937. They created a "Safety Zone" for the poor who could not afford to flee while the Japanese military looted the city's riches, raped tens of thousands of women and girls, and gruesomely executed more than 200,000 prisoners of war.

Often dubbed "the forgotten holocaust" because the atrocities committed by the Nazis in Europe overshadowed it, the Rape of Nanking has been brought to the big screen in an innovative way. "Nanking" is a mix of archival footage, interviews with both survivors and perpetrators, and staged readings of the Westerners' letters and diaries, featuring actors such as Woody Harrelson, Mariel Hemingway, and Jurgen Prochnow.

We often hear the word "atrocities" bandied about on the evening news, but watching one survivor weep while talking about his mortally wounded sibling trying to suckle on their dying mother's breast, or listening to a woman matter-of-factly recount how she assented to a sadistic rape at the age of 11 to save the life of her grandfather is a sickeningly visceral experience.

"Nanking" is not a feel-good, spirituality-lite production; it is difficult and haunting. Yes, The Safety Zone Committee Members, as the group of foreigners dubbed themselves, saved more than 250,000 people and brought the terror to light through film they smuggled out of occupied China. But, there was no triumphant ending; the world community did not immediately act, Committee members became disillusioned with the governments they trusted, and one member eventually committed suicide fearing she had not been able to do enough.

George Fitch, the American who carried the hidden film in the lining of his coat in a railroad car full of Japanese soldiers, wrote, "These pictures have been taken with no thought of stirring up a spirit of hatred against the Japanese, but only with the desire to make all people realize how horrible war is."

But this film stirred up many spirits in me. I was angered--not only by the evidence of man's capacity to be completely inhumane, but by the inherent injustice that takes place when the most vulnerable bear the brunt of war's horrors. I wanted to take action.

As one Chinese survivor says toward the end of the film, "Each one of them [The Committee Members] felt they had a moral duty to sacrifice in the name of peace and humanity." Hopefully, "Nanking" will serve to remind us all of our moral duty to work for peace and inspire us to do so.
-- Ellen Leventry