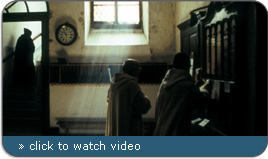 "Into Great Silence" is a rare film. Never before have we been given such an authentic look at life inside a monastery, in this case, the Grand Chartreuse monastery of the Catholic Carthusian order in France. Director Philip Groning first approached the monks about filming there in 1984. Sixteen years later, they said yes. But he had to shoot the film without the assistance of a crew or any artificial light.

The Carthusian monks have dedicated their lives to God, silence, and solitude. Times of prayer structure their days, with bells calling everyone to stop what they are doing and get on their knees. We see the monks doing chores to keep the place going--working in the garden, making new robes, chopping vegetables, giving each other haircuts. The rule of silence means that they speak as little as possible and never in the chapel or the hallways. They do talk during their four-hour Sunday walks. In a delightful scene, the monks slide down a snow-covered hill on their boots, laughing as they lose their balance.

Throughout most of the film, however, all you hear is the sound of silence--some ambient noises of feet in the stone corridors, a door or window opening. As a result, this film both depicts and creates a moments of contemplation. When we saw it, we felt a shift in our bodies, a slowing down. We were so into the rhythm of the monastery that we didn't even notice that the film was almost three hours long. And something else happened at the screening we attended. About an hour into the film, three people got up, and we thought they were leaving. But instead, they moved closer to the screen. The silence had reached out to them and beckoned them into its embrace.

"Into Great Silence" is not just a great spiritual documentary. Seeing it is a profound spiritual experience.
-- Frederic and Mary Ann Brussat

"Into Great Silence" isn’t interested in merely recording the mundane activities of monastic life, but rather immersing the viewer so completely that the barrier between projection and reception vanishes completely. Never has a camera been more intimate or observed as closely. It becomes a thing metaphysical rather than mechanical, trading the natural for the supernatural.

It is a mistake to say this is a silent film. If anything, the absence of human speech reveals how much sound we miss. This is a soundtrack of sandals slapping marble, gurgling brooks, songbirds, the swish of fabric, the rustle of pages, the ringing of bells. So powerful is the silence that it seems to embody a sound all its own. One begins to imagine the noise light makes as it streams through windows, splashes across wood, reveals dust particles dancing in the air.

"Into Great Silence" is hypnotic, lulling the viewer into a trance. This is more meditation than movie--a mesmerizing, poetic chronicle of spirituality.

You are aware, while watching, of just how much you have and just how much you lack; of the omnipresence of the divine in the most mundane of activities; of the pervasive majesty of the natural world utterly squelched by our urban lives; of the inspiration these men arouse. To watch this film is to be humbled. To watch this film is to be in awe. "Into Great Silence" is a transformative theatrical experience, a spiritual encounter, an exercise in contemplation and introspection, a profound meditation on what it means to give oneself totally and completely, reserving nothing, to God.

I have never before experienced a greater example of utterly transcendent filmmaking. When the lights came up and I shuffled out onto the street to be greeted by the angry din of Manhattan, it was enough to make me weep.
-- Brandon Fibbs