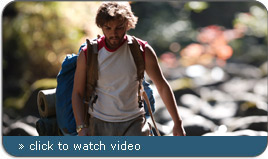 Our oldest stories are of journeys, literal and metaphoric. Jacob goes to the desert and wrestles with an angel. The Jews leave Egypt and take a 40-year journey to Israel. In movies from “The African Queen” to “The Wizard of Oz” and “Toy Story,” we travel with characters through adventures that teach them--and us--lessons about courage, honor, loyalty, and what we learn when we test ourselves.

In that tradition, Emile Hirsch goes “Into the Wild” as Christopher McCandless, leaving everything behind--money, family, even his name, ultimately almost every aspect of civilization--to test himself completely.

Now self-dubbed Alexander Supertramp, he crosses the United States on his way to Alaska. In one respect, his journey is a selfish one. He abandons his family. He has no contact with his parents, siblings, or friends. And he resists any ties along the road that might interfere with his ultimate goal of living completely alone in nature. But we see in each of his encounters along the way how he listens to the people he meets with kindness, generosity, and integrity. He tries to live by Thoreau’s words: ”Rather than love, than money, than fame, give me truth.”

Both Jon Krakauer, who wrote the non-fiction book about McCandless, and director Sean Penn, who adapted it for the screenplay, have said that they identified with the young man’s brashness and passion for taking on the challenge of total engagement with nature. Like Jacob, they all left what they knew to wrestle with angels, to discover who they are and what their relationship with the universe must be. McCandless died just 20 miles from civilization because by the time he realized he was sick from poisoned berries he was too weak to get help. But he touched the lives of those he met and he engaged deeply with the issues of the meaning of existence. And he and the audience got to hear the words of a man he met along the way: “When you forgive, you love. And when you love, God's light shines upon you.”
--Nell Minow

Emile Hirsch has slowly made a name for himself taking over the kind of tortured youth roles that launched actors like Leo Di Caprio to stardom. And certainly he is impressively disaffected, angst-filled, and empathetic as he portrays Christopher McCandless, a real-life Holden Caulfield whose journey away from society into the wilderness was the subject of the bleak biography "Into the Wild." However, director Sean Penn (a man also known for his angry young man roles) turns Hirsch's performance into a highly romanticized version of the tragic events of the book. Instead of serving as a cautionary tale, Hirsch's version of McCandless tries to fool the audience into believing that idealism is enough to make someone a hero, and that while one may indeed be the loneliest number, it is also a number to be glorified, even canonized. That's a philosophical view I found not only uninspiring but unoriginal.

Certainly Hirsch brings a passionate intensity to the role and handles the physical demands of the part with skill, but Hirsch's performance never truly gives us insight into the underlying emotional causes for his ultimately destructive choices. As he drops out of school, hits the open road, and rids himself of all worldly possessions, the youth shuts off communication with his parents, and while he encounters some helpful people on his travels, I never believe McCandless embraces what they were trying to offer him. And I never understand why a man who has a commendable thirst for social justice believes he is going to solve the world's problems and find his true self living as a homeless guy in Alaska.

All of the close-ups of Hirsch gazing into the distance against a spectacular scenic backdrop do not mask the harsh reality of McCandless's lost potential, which could have possibly made a difference in our culture if he would have had the courage and faith to face his demons and embrace the world around him.
--Kris Rasmussen

Emile Hirsch in "Into the Wild" is, to me, the undeniable winner of the Best Spiritual Performance award. This film is fresh, honest, and alive as it documents one man's laudable search for freedom in both the beautiful world outside and the unchartered world inside. It's the ultimate road trip because it sets its sights on the physical and spiritual at the same time.

Replete with postcard-perfect scenery, top-notch acting (non-acting, really) by all the characters, this film carries a deep message that is universal and yet individual. And it all rests squarely on the shoulders of one impressive actor.

Emile Hirsch, in his portrayal of real-life adventurer Christopher McCandless, is Spirit in motion and imagination personified. He's curious, punchy even, about what lies unconquered--in the world and within himself. He's yearning for something. Seeking happiness. Turning over rocks in search of Truth with a capital 'T'. Does this not resonate on some level with every visitor to Beliefnet?

I'm making "Into the Wild" sound much more esoteric than it really is, for ultimately, it's a rather simple story beautifully told, thanks to the vision and inspiration of director Sean Penn. It stoked the fires of my own imagination and defined how a motion picture can reach out and affect, even inspire, a viewer.

My vote goes to Hirsch because he committed so completely to the role. He delivers such a seamless performance and makes it looks so easy that I'd venture it's costing him well-earned accolades within the Hollywood community because you can't separate the actor from the character.

If you've seen the film and you remember his final reflective thought about happiness, it's the reason I'm as giddy as a schoolgirl in writing this.
--Todd Havens