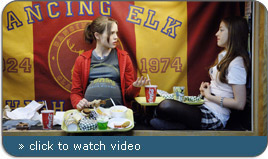 Super smart Juno MacGuff (Ellen Page) is a 16-year-old girl who has sex with her boyfriend because she is bored, and is confounded when she discovers she is pregnant. She decides to have an abortion. Yet when the picketing pro-lifer outside the clinic tells her, “Your baby has fingernails!” Juno begins to reconsider and decides on adoption.

Throughout this very funny and earthy film there are casual religious references but what gives "Juno" its soul is the young girl’s inner life, her heart. In some ways, Juno feels she is invisible to her family and teachers, but as she fiercely and with so much humor makes her way through these nine months, she comes into her own. She develops more personal insight and clarity of vision as the baby grows within her. By the time the baby is born, Juno is wiser and happier; ready and willing to continue her life’s journey in relationship with others; to learn what love really means and if it can last a lifetime. She knows she is someone who matters to herself, her family, and her friends.

Before my eyes, Juno became the outward manifestation of her inner reality, a life-force, gracing my soul and making me smile.

Juno was named for the Greek god Zeus’ wife because “supposedly she was beautiful and really mean. Kind of like Diana Ross.” However, other meanings for Juno are “life force” and “maiden goddess of birth”--a warrior. And so is Juno MacGuff.
-- Sister Rose Pacatte

Sixteen-year-old Juno MacGuff cannot be faulted for wanting to give her unborn baby away. Indeed, she is finally at the age where her poor choices are just now appearing with the sort of clarity only adulthood can reveal. It is a brave choice to not take the easy road and have an abortion (although the constraints of plot pretty much made that one a no-brainer) and instead give her child up for adoption.

Juno is to be commended for her actions, but she is hardly a saint. Don't get me wrong, I am not judging her for her sexual indiscretions. For me, the spirituality of her actions rests (or doesn't rest) with what she does after she discovers she is pregnant. And that is where, despite her good intentions, Juno fails as a pure spiritual force.

Though Juno does the right thing, it is not as if she sets out from the beginning to bless another human being. Juno is in a pickle and desperately needs a way out. Giving her baby up for adoption is not a selfless act. Adoption profits her as much as it profits the adopter. Juno's actions are not the actions of an enlightened person so much as a young woman hopelessly out of her depth and looking for a way out that helps the greatest number of people--especially herself. It is a completely understandable selfishness, but it is selfishness nonetheless. In the end, when you boil it all down, the adoption is an essential means to an end, not for Mark and Vanessa Loring but for Juno herself. The blessing is but a by-product.
--Brandon Fibbs