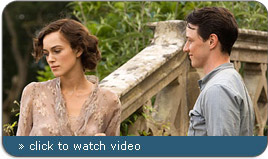 It has always been said that writers, by the very nature of their art, play God. This is, perhaps, nowhere more clear than in author Briony Tallis' act of inventing a happy ending for a couple who were denied such an outcome in real life as a result of her youthful indiscretions.

Rather than abiding by reality or historical truth, Briony fashions a new truth from the dust of her own imagination and the rib bones of what could have--what should have--been. But in playing God, Briony is also well aware that to go all the way back in time, before The Fall, would be to pretend her sin never existed and that, for her, is equally impossible.

And so, imaginatively omnipotent, but bound by her own immutable laws, Briony grants the deceased couple redemption--paid for, ironically enough, with their own blood--and gives them what only she can: an eternal life of bliss together in a perpetual paradise where they shall never grow old, never share a cross word, and never again face the scourge of her or anyone else's sin.

Some have seen Brony's actions as the ultimate nihilism, an act of utter hopelessness, putrid fantasy at the expense of what is real, a shameful attempt to whitewash and distract from her own sins with a lie every bit as virulent as the one that necessitated its invention in the first place. But, denied by death the chance to do right by her sister and her doomed lover, Briony does the only thing she can do. Indeed, she refuses to allow her transgression to go unanswered and cannot abide the pain she caused continuing for even one moment longer. And so, she grants life where before there was only death, hope where there was only hopelessness, a future where there was only a stunted past. It is an act of supreme love and contrition and it is only hers to give.
-- Brandon Fibbs

"Atonement" was one of my favorite films of 2007, and certainly deserving of all awards coming its way. I concur with most good things said about the movie, including those written above by my Christianity Today colleague Brandon Fibbs. So I have no argument about the film's excellence. But I don't think it can be called one of the year's most spiritual movies. Beautiful? Yes. Emotional? Uh-huh. Heartbreaking? Certainly. But spiritual? Nope.

Briony, one of the film's main characters, is guilty of ruining the lives of two people--her older sister Cecilia, and Cecilia's love interest Robbie, the son of the family's housekeeper. In her meddling, snooping and outright lying, Briony royally screws things up for Cecilia and Robbie--forever.

We learn that Briony deeply regrets it, and has lived with guilt for years. But her regret either came far too late for her to actually make amends, or else something else (spite? jealousy? immaturity?) kept her from putting things right at an earlier time.

When she does finally try to "fix" things, we don't really learn why. Is she overcome by guilt? Shame? Love for her sister? Witnessing the horrors of war? We simply don't know what motivates her change--but we can't assume it's anything spiritual, because the movie never explores that territory. We never see her pray, or cry out to God. We never see her consult a pastor or a Bible or any other symbol of faith or spirituality. She just eventually reaches a point where she expresses regret--and it's not really an outright "confession"--but only after it's far too late for Cecilia or Robbie.

I like the way our critic, Peter T. Chattaway, concludes his review: "It ends on a surprisingly powerful note that asks whether there can ever be true mercy without, well, truth. Can one find redemption in a lie, if it is told with kindness?"

Good questions, and worth wrestling with. But we don't know how Briony would answer them--and there are certainly no clear answers to these questions in "Atonement." Great film, yes. Spiritual? Nah.
-- Mark Moring