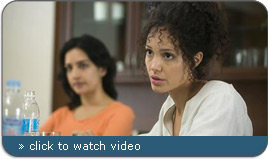 Angelina Jolie might not have dropped 30 pounds, developed a debilitating disease, or lived in solitude in a horrifying future, but her performance in "A Mighty Heart" stands not only as one of the year's best performances but arguably as the bravest. Starring as Mariane Pearl--devoted wife to slaughtered Wall Street Journal correspondent Daniel and a distinguished journalist in her own right--Jolie juggles first the superficial hurdles of a French accent (flawless) and a prosthetic pregnant belly.

In a few flashbacks well-captured by director Michael Winterbottom, the actress and her co-star Dan Futterman paint a touching portrait of love cut short by terrorism; what unfolds in the Pearl's rented house in Karachi, Pakistan, in the days following Daniel's disappearance is an amazing depiction of determination, both physical and spiritual. The supporting cast is top notch and Winterbottom's documentary-esque filmmaking certainly elevates the story, but without Jolie's subtle powerhouse of a performance--her ability to play strength without making the strength itself a caricature-it--all would have fallen flat.

I'll admit, I was the first to pan the casting of such a famous actress, particularly given the fact that Mariane, who wrote the book on which the film is based, is herself something of a celebrity. But Jolie, and I don't use this cliché lightly, disappears into her role. Whether she's mustering up the will to talk to Daniel's parents, meticulously recounting Daniel's steps to the restaurant he was kidnapped from, or dissolving into a heartrending display of despair when her husband's fate is finally revealed, her portrayal is one infused with hope in the toughest of circumstances: She reveals to us the true meaning of devotion, courage, and, in the film's final moments, as the chaos of Pakistan dissolves to the empty streets of Paris, she shows us it is possible both to remember and to go on.
-- Jenny Halper

I really liked Angelina Jolie in "A Mighty Heart." It was a gritty, grainy movie that focused on the increasingly frantic events leading up to the 2002 assassination of Wall Street Journal reporter Daniel Pearl in Pakistan. I found her portrayal of Marianne Pearl, both as a wife and as a journalist, convincing and compelling. I loved the real feel of the location shooting that made up the film, and came away much more aware of this event's tragic details than I had been. And I cared about it more.

But what I didn't see in the movie was a spiritual core in Jolie's performance. That may be more of a criticism of the script, or perhaps there just wasn't that kind of component in the real Marianne Pearl's life, so for Jolie to have injected it into the role would have been inappropriate.

But still, I would like to see more portrayals of authentic dependence upon God in movies like this, as well as a stronger representation of the conversations with God that most of us have when we go through these events. We may not speak such thoughts out loud very often, but movies (of all places!) should have the magic of taking us inside the spiritual search that is so much a part of our lives, especially when we're in crisis. To see it would be a comfort, and shouldn't be a taboo.
--Doug Howe