'The Kite Runner' Soars Into Theaters

Khaled Hosseini, author of the blockbuster novel, discusses the new film, his faith and values, and Islam in Afghanistan. 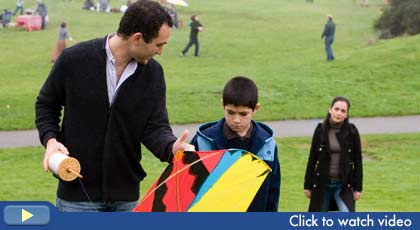 Watch a clip from the movie, or read the interview below.

The movie adaptation of the blockbuster 2003 novel "The Kite Runner" arrives in theaters Dec. 14, and it's already received a Golden Globe nomination for Best Foreign Language Film. The story focuses on the affluent youth Amir and his servant friend Hassan, who are separated by a horrific sexual attack and the 1979 Soviet Union invasion of Afghanistan--and later become connected as adults when the Taliban are in power. All this came from the imagination of doctor turned author Khaled Hosseini, the son of an Afghan diplomat who sought asylum for his family in Northern California after the invasion. Hosseini spoke with Beliefnet about the book, the fate of Islam in Afghanistan, and how he stays grounded after finding massive success with "The Kite Runner" and his current release, "A Thousand Splendid Suns."

As you were writing the "The Kite Runner" book, what did you expect to happen after its release? 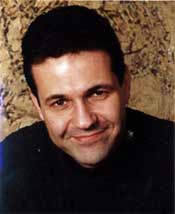 I had very modest hopes initially. I [hoped] a few people would actually read it. I wasn't sure that this was the kind of book that would have wide appeal because it was set in a distant country [Afghanistan] that a lot of people didn't know--and maybe even didn't care much about.

How much of you is in the character of Amir?

His trials and tribulations are not necessarily mine, although I grew up in this pre Soviet war Kabul. I belonged to the same kind of [socio-economic] background as he did. I went to the same school as he. I was a writer at a very young age. In fact, the little short story that he writes in the film for Hassan was something that I had written, I think back in 1974. I loved flying kites with all my friends in Kabul. It was almost like a rite of passage.... I loved film, especially Westerns.

I got moved to the [United] States in the wake of the Soviet invasion, went through many of the immigrant experiences that he did with his father: Seeing all the professional Afghans who are now running gas stations and that sort of thing. So, all of that came from my life. But, the story line itself, what happens between the boys and so on, that's imaginary.

The kite is just one of the many symbols in the story. Do you have a favorite symbol?

For me, the scene in the alley [where local bullies corner Hassan while Amir hides in the shadows] has always had a metaphoric quality to it, and the rape scene [of Hassan]. A lot of fellow Afghans feel like that's what happened to their country, if you substitute Afghanistan for Hassan. After Hassan has served his purpose and found what Amir wanted, the kite, then Amir kind of stands by and watches him be attacked without intervening....

A lot of Afghans feel that's what happened [after the Soviet Union left and Western countries failed to help the country].

There has been some opposition to the inclusion of the rape scene in the film. The parents of three young actors asked for producers' help in relocating, and the movie's release date was postponed to do so. How would you explain this opposition to someone who's not familiar with the Afghan culture?

I understand that when the children were cast the producers had a lengthy discussion with the guardians and the children about that scene, because it is a difficult scene, I think, for any child of any nationality.

In Afghanistan, any sexual act depicted on the screen is fraught with sensitivity and delicacy, so this was not an easy scene to shoot.... I guess, later, there were some disagreement about how fully [the guardians and children] understood or they did not, but... I wasn't present during those discussions to be able to give my side....

There were some suggestions from the community to remove the scene, but I don't think that's possible. Without that scene you really don't have a movie. Certainly, the narrative [would fall] apart because what happens in that alley is so ugly and so reprehensible that it seers this character's mind to the point that he is haunted as an adult and risks going back to Afghanistan because of that memory.

But ultimately the film is not about the scene that everybody has been talking about. The pivotal plot of the movie is not about rape; it's not about sexual predators. It's really about atoning for past mistakes. It's about tolerance and forgiveness and fathers and brotherhood and I think very, very positive things. If you look at the film as a macro-chasm rather than microscopically, and sit back and look at the overall message of the film, I think it's a very positive one. I believe that once people have had a chance to see the film and for its entirety, a lot of this controversy will die down.

What was your involvement with the filmmaking process?

Mainly as a cultural advisor. I didn't write the screenplay. Dave Benioff did, but he and I talked throughout. He would e-mail me, and I would answer his questions. I had told him that I would support him through it. When he finished the screenplay, [the director and the producers] and myself read the screenplay. We all wrote some notes down and sent them back to David, who accepted them graciously and wrote another draft.

I helped [the filmmakers] look at hundreds of [location] photos and suggested Western China, when those pictures came up, because it was so similar to Afghanistan--architecturally, ethnically, culturally. And I served as advisor on issues of language, clothing, the rituals of getting married. At various points they would ask me questions, and I would chime in.

I just told [director] Marc [Forster], "Look, I don't want to be intrusive. But, I just want to be there available on the sidelines if you need help." He called on me quite a bit, and we had discussions.
The story shows different levels of religiosity among the characters, but did you intentionally focus on secular Muslims?

I think you see the secular Muslims because I consider myself a secular Muslim. In the book specifically, much less so in the film, Amir's father [is] essentially an atheist and is not bound to any religion. Amir, himself, is on the fence. He's kind of an agnostic.

But, as the story progresses, and as he grows up and has a series of trials, and at the end, he comes to a place of faith... and has become a moderate practicing Muslim.

I myself come from a fairly liberal and secular background. Both my parents were practicing Muslims, but they never enforced religion on us. I have a particular disdain for Islamic extremism, and of course, in both "The Kite Runner" and "A Thousand Splendid Suns" that's obvious.

But I'm proud of the scene at the end of the film, where Amir goes to the mosque and prays, and it's an act of communication with his God. It's just a pious act [and] the ritual is performed in its proper context.

Usually in films, when Muslims pray, it's either before or after they've blown something up. I'm glad that that scene is there. I'm glad that Islam is shown, and it's in a more positive light in this film.

How would you describe the role of religion in real-life Afghanistan, and how is that reflected in the story?

Afghans are very religious people. Islam is just enmeshed in day-to-day life. It kind of sets the rhythm and pace of life in Afghanistan throughout [Kabul; I remember] that well from my childhood.

In the film, I thought it was important not to consciously focus on that but just let it be casually a part of the day-to-day life of these characters. So you have scenes where there [are] two characters, they're just praying, and then they get up and go about and do their things.

I felt like usually when there's a Muslim character in a film it's because they're Muslim, and then they're asked to do Muslim things. That identifies them as Muslims.

And what I like about ["The Kite Runner"] is that the faith of these characters is essentially incidental to the reason why they're in the story. I think hopefully there will come a day in Hollywood where we will have characters who are Muslim [and] who aren't in the story because of their faith but because they serve some [other] kind of purpose in the story. So it's this incidental treatment of their faith that I really admire and I think we need more of.

How have the Taliban changed the role of Islam in the country?

That's a complicated question. I think they've done a great disservice to the faith of Islam, not only Afghanistan, but throughout the world. They've kind of hijacked the face of Islam, as it were. Not just they alone, but of course the people that they collaborated with and depicted a very violent, unforgiving, nihilistic picture of that faith.

Most of the people that I know who are Muslim are nothing like them and have nothing but disregard and contempt for those factions. There have been polls in Afghanistan repeatedly, and the overwhelming majority of people are glad to be rid of the Taliban.... I wish that some other, more moderate elements of Islam would be more vocal, would have a more public face because the likes of Bin Laden and the Taliban have captured the media attention, and certainly they have been very vocal. I think some of the more, not necessarily secular per se, but the more moderate elements in that religion ought to try to balance that and be a little bit more vocal and more public.

Do you have hope for an Afghan society that enjoys full freedom of religion?

You always have to have hope. If we say, "We have no hope; it's hopeless, let's give up," I don't see that as an option. Afghanistan will always be a religious country. It will always be conservative. But within the context of that conservative religious country, I hope we can find a way to have a reasonable amount of freedom, where people are not persecuted for their faith, where people have a reasonable participatory process in politics, in representative politics.

A Western-style democracy in Afghanistan is a dream. I don't see that as a reality anytime soon. But I think some form of representative political process is not that far-fetched. But again a lot of it depends on the persistence and the long-term commitment of Western countries, particularly the United States.

With all your success and the current publicity, how do you stay grounded?

It's very easy: I'm 42 years old. At 42, you've lived long enough where you know what's important in your life. I have a wife; I'm responsible for two children who are 7 and 5. I have a very strong family life and that's really my life. I never lose focus. That's my reality.