The star tells us how he studies the Bible daily, prays every morning and night, and sees his films as a form of preaching. 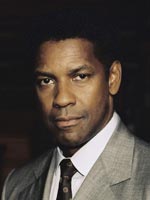 Denzel Washington is one of America's most beloved and critically acclaimed actors. A two-time Academy Award winner, Washington this week received a Golden Globe nomination for his role in "American Gangster," which also was a nominee for best drama, along with Washington's most recent film, "The Great Debaters." His second directorial effort, "The Great Debaters" also stars Washington as Mel Tolson, a professor at a small African-American college in 1930s Texas who coaches the school's debate team to national prominence while also working as a union organizer on the side.

Listed second on Beliefnet's "Most Powerful Christians in Hollywood" list, Washington also lent his voice to "The Bible Experience," an audio Bible featuring some of the country's top African-American stars. He spoke with Beliefnet about his relationship with God, a long-ago prophecy about his career, and why he made a film about a debate team.

Listen to Denzel Washington:
My Work Is My Ministry My Favorite Prayer What Inspires Me

Why did you make a movie about a debate team?

A good story is a good story. And this was a good one. It was one that moved me when I read it. It's sort of like "the little train that could," the "David against Goliath." It was just a positive and inspiring story that Oprah Winfrey's company [Harpo Films] had bought. They believed in it long before I got involved in it. And when I read it, I was equally moved and decided to do it--to direct it, and act in it.

In the movie, while arguing with the theologian Dr. Farmer, your character says, "Jesus was a radical." Is that a statement that you agree with?

In a way, Jesus was a radical. The character's point being that he came in, cleaned out the temple.

What role does Jesus play in your own life?

I was raised in the church. My father was a minister for 60 years. And I've been a member of West Angeles Church of God in Christ for, now, about 27 years, since I've been out here in Los Angeles.

Why was it so important to put spirituality in it?

Because spirituality is important in every aspect of my life. I mean, that's why I'm here. That's what I've been blessed to do.

When I was about 20 years old, when I first started acting, I was sitting in my mother's beauty shop. And a woman just kept looking at me. I was looking in the mirror, and I saw her across the room. And she said, "Someone give me a piece of paper." And she wrote down a prophecy. She said that I would speak to millions of people, and I would travel the world and preach to millions of people. And I didn't know what she was talking about. But this was March 27th, 1975, 32 years ago now, almost 33 years ago.

So my work has been my ministry. In fact, I asked my pastor, years ago, "Do you think I should become a minister or a preacher? And he says, "Well, that's what you're doing already." And he felt, as I feel, that that's what she was talking about back then.

I've always understood why I've been blessed to be put in this situation. And I'm more than happy to take advantage of it and to preach, if you will, about what God has done in my life.

How did being the son of a pastor help you prepare for this career?

I don't know. When I was young, actually, it was an obligation. You had to go. It wasn't necessarily what I wanted to do. But I lived in church morning, noon, night, weekends, Sundays, every day. So there was a time, between that time and as a young adult, where I moved away from the church because I was obligated to go. And I just found my way back, maybe 30 years ago, at 27--30 years ago, when I came out here.

How would you describe the role of prayer in your life today?

Even this film--every major decision I made, I made through prayer, about who I was picking to be in it, what it was I was trying to say, praying that the film was saying the right thing and that it would reach the right people. It's every aspect of it. Every aspect of it. It's how I start every day, and it's how I end every day.

What sort of prayers do you say?

Do you have a favorite biblical story or Bible book?

I don't know if I have a favorite. Right now I'm with Paul. So, I'd say that's my favorite.

Every year our pastor suggests that we start the New Year by reading the Book of John. So I think I'm going to do that the first of the year. But there's so many great stories. I couldn't pick one.

Do you have a favorite prayer you can recite for us?

One that we start the film with, that my mother always says, is:

"Heavenly Father, we come before thee, knee bent and body bowed, in the humblest way that we know how."

I always liked that. That's something that I've always remembered, and I promised her that I would share. So I'm proud to have the opportunity to share that.
You've talked about drifting from the church for a while and coming back. What did you do when you were drifting? Were you trying out other faiths?

And what brought you back to Christianity?

God. I can't say "this" or a particular event. I just slowly worked my way back. The church I go to, West Angeles, a buddy of mine--I don't know if you know the actor and director, Robert Townsend--he had moved out to Los Angeles before me. And I got out here in about 1979. And he was attending West Angeles. And I started going with him. And been going ever since.

And did you take anything with you from the searching in other religions as you came back? Is there some part of you that was changed by it?

That's a good question. I think, even then, it was the search, it was the desire to find a--not to say just the meaning of life but some personal meaning and peace, inner peace. And I think all of those things led me right back to where I am.

You play, in so many of your movies, these very inspirational figures. And then, in others, of course, you play the bad guy. To what extent do your faith and values play a role in choosing parts?

Even in a role like "Training Day," the first thing I wrote on the script was, "The wages of sin is death." And it was important, actually, for me in making that film. They actually wanted the guy to live at the end. And I said no. I think the only way I could justify him living such an awful life, or living in the worst way, was for him to die in the worst way. I'm always looking for that--for some kind of a message. And sometimes I just choose not to do certain films.

Because of the message it sends?

Yes, or the lack thereof.

Being in such a public position and getting the honors you get, do you feel a certain responsibility to be a role model?

At the same time, I think this word "role model" is thrown around loosely, when I think it really starts in your home. Your role model should be your mother and father. And hopefully, they're both there. And people in your community or people in your church or people in whatever organizations you go to that you can talk to. The people that I saw on television or in movies when I was young, maybe, in some way, influenced me. But it was more about the people that are around me.

But, at the same time, having said that, you never know how a person influences you. When I sign autographs, I always put "God bless" on that. And I remember watching the "Red Skelton Show." Red Skelton used to always say "Good luck" or he'd say "Good night and God bless." And I always liked that. And I don't know how many thousands, and hundreds of thousands, of autographs I've signed. So, in that regard, a small thing like that can influence you.

"The Great Debaters" not only tells the story of the Wiley College debate team, it puts the story in the context of the racist, often violent, Jim Crow South. Why was that important to you?

For me, it wasn't so much about [hostility between] the races, and even though that's obvious in the '30s and sometimes even now, but how you overcome it, how you get through it. What's the saying? "There's no testimony without a test." We all have tests and challenges that we have to get through, personal, spiritual, racial, a test that we have to overcome. The bottom line is that these young kids fought their way through it and ultimately were winners. And that's the message, that you don't have to give up. And you don't have to give in.

What inspires you to overcome challenges in your life?

I remember a couple years back, I was up for an Academy Award. I could see a lot of the politics and the things involved in it. And I just remember my mother saying, "Just remember, man gives the award. But God gives the reward." So I understand that what I've been blessed to do is a part of God's plan. And as long as I please Him, then I'm pleased.