In Love with a Real Doll

Actor Ryan Gosling and director Craig Gillespie talk to Beliefnet about faith, family, and their film 'Lars and the Real Girl.' 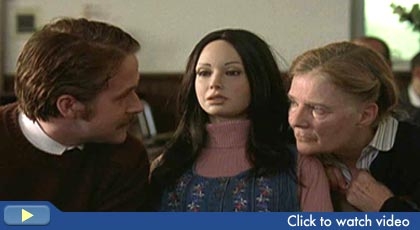 Plus: Watch Another Clip: A Church Meeting

On paper, the plot of the film "Lars and the Real Girl" might sound off-putting: It's a story about a man who falls in love with, and carries on a relationship with, a life-sized doll he buys off the internet. On the screen, however, the movie is a touching and hopeful story of the love not only of a man and a doll but of a whole community, which decides to accept Lars for who he is. The movie's star Ryan Gosling and director Craig Gillespie sat down with Beliefnet to talk about family, faith, and treating a doll like a fellow cast member.

In one scene, Lars' fellow church members have a meeting to decide what to do about Bianca, the name of the doll, and they decide to accept her. Did you want to make the church members sympathetic?

CG: This movie is about community, the opportunity to be part of a community. I wanted to portray the parishioners in a realistic way. It isn't unusual [for people to be accepting], it's just unusual in film. In real life, there's always family drama going on. In my mind, there’s no such thing as a normal family. This is just a more absurd case of that. You never shut the door on people, you try to help them. The movie deals with the innate goodness of people, and in life I find that’s actually more true than not. People genuinely want to help each other and do right by each other.

RG: I think they do it for themselves too. I don't think they do it just for Lars. I say that because I saw her effect on myself, and on everybody on the crew. She's interesting. She asks you to look at yourself, to be creative, to develop a relationship with yourself that you haven't developed. It forces you to be intimate with yourself. Everybody gets something out of their relationship with her.

In a way, the film asks the other characters, as well as the audience, to take a leap of faith. How does that happen?

CG: At the beginning of the movie, I allow everybody to be, like, "This is absurd." I let that humor get out there. The thing is, they [the other characters] don’t believe in Bianca, they believe in Lars. Their love of Lars is making all of this possible. Bianca is that conduit. Nobody knows how to reach out to him, how to react to him, and then Bianca turns up. That’s their avenue.

RG: I think this movie has fable-type themes to it. It's like an adult children’s book.

How did you treat Bianca during the filming? How did people react to her?

CG: The way we approached this movie... it was never just a doll. It was always a serious relationship that Lars was going through with a woman. Everything we worked on, all his motivation that he had in every scene, was his relationship with Bianca.

RG: I said to Craig, "How are you going to shoot her?" He said, "I'm going to treat her as though she has a nudity clause in her contract." He meant it, and he did that. He required that everybody treat her like an actress. She got magazines between takes. She had her own trailer, they changed her in her trailer. She came on set and she was treated like any other actor.

"Lars" is a very unusual love story. Did making the film teach you anything about love?

RG: Falling in love is a narcissistic endeavor. You play the role of lover and you find someone to act it out on. Let's just say Bianca is not my ideal woman. No way.

It took four years for 'Lars' to finally get made. How did you keep yourself going during that time?

RG: I've heard this saying, that a director has to act like he's the leader of a parade, even if there's no one behind him. He just has to keep marching ahead, and finally he looks back and there's a whole parade behind him. Craig just kept leading the parade.

CG: I would direct work on something, I directed another film, and people would ask me what was next, and I'd say, "I'm going to do 'Lars.'" I just kept believing it long enough that people stopped questioning it. It wasn't how, but when.

That sounds sort of like the Law of Attraction. Have you ever seen the movie or read the book "The Secret"?

CG: I haven't seen it, but my wife likes it. I mean, I can kind of understand the idea of that movie, that you visualize something and then it happens.

RG: I think the Law of Attraction comes from a rich, white, privileged perspective. I just got back from Uganda. I'm working on a movie about child soldiers there. We're lucky to be in America, but I can imagine someone from that culture, in Africa, they wouldn't identify with that.

Did anything from your spiritual background influence you during the making of this film?

CG: I didn't really grow up religious. I guess I grew up atheist.

RG: I grew up Mormon. I wasn't really Mormon, my parents were. My mom was really cool. She said, "This is an option, but this isn't the only option. This is an idea, but this isn’t the only idea. You have to find your own truth." I never really could identify with it. There's good things about going to church. [Being Mormon] socialized me at a young age. You have to pray in public, shake a lot of hands, talk in public, sing in church, stuff like that. It has definitely stayed with me.