The star and his collaborators discuss their new documentary, how we can help the Earth--and what they're doing to live green. 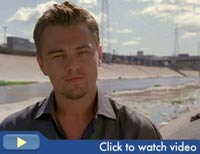 "The 11th Hour" is a documentary, narrated and produced by Leonardo DiCaprio and opening Aug. 17, about the havoc we humans have wreaked on the environment and what can be done to change the current path. This is depicted in the film through a serious of dialogues with more than 50 experts in subjects such as the environment and ecoliteracy; climate change; oil; consumerism and media; sustainable design; and religion. Recently, DiCaprio, along with writer/director/producer Leila Conners Petersen, writer/director Nadia Conners, and Kenny Ausubel, founder of the nonprofit Bioneers, met with the press in Beverly Hills to discuss the film. (To watch a clip of the movie, click here.)

What attracted you to this project?

DiCaprio: We had previously worked together on two short films ["Global Warning" and "Water Planet"]. And it really was a homemade movie in a lot of ways. It became about a lot of discussions that we had about the environment and media, and the want and the need to hear some of the great experts and visionaries in the environmental field of our time be able to speak in an open forum, uninterrupted, about a subject matter that they've devoted their life to.

That was really the basis of wanting to make this movie, wanting to hear some great figures really give us some insight as investigators on this issue.... It became, I suppose, a year-and-a-half editing process, condensing down some of their profound thoughts and ideas into an hour-and-a-half format, which was very challenging at times, to say the least.

Are there one or two particular actions you could tell people to do which would make a tremendous difference?

Conners: This is something that we've talked about a lot. I'll answer your question directly, but I think that this is a moment in history where we really have to inspire ourselves, and inspire people to take action in ways that we can't even begin to anticipate.

There are tremendous innovations that [are] in the wings, that's already been developed, that's about to happen. Once you have the shift in consciousness, once you see the world as not a limitless resource, but as a finite resource, and you understand the way our civilization is impacting it, you can come up with very interesting ways, far beyond the 10 things that you can do which we know about now, which is, like, changing your light bulbs and being more conscientious about certain things.

But I will tell you, the one thing is food. And food has a tremendous impact ecologically on the planet, the way it's produced and the way that it's shipped. It uses an enormous amount of fossil fuels, degrades the soil--I'm talking about industrialized agriculture. So if you can start by looking for organic food, local food, and farmer's market food, you will really [have an] impact and there will be a ripple effect on the industry. That's something we all do multiple times a day.

Ausubel: I would underscore what Nadia's saying about consciousness. I mean: there is a level of just education and awareness right now that's really critical.... The film gives some glimmer of the kind of innovations and solutions that are out there. At the end of the day, it's not really a technical problem. We already know what to do, for the most part. It's really a political problem.

So my conviction at this point is that this movement needs to become very explicitly political, and the rhinoceros in the room is corporate power. You could frame this such that it's really corporations versus the survival of the planet. And that is where the cutting edge of the work is going to go.

But there's a meta-trend right now called the New Localism. At 300 million people, this country is basically ungovernable. The corruption in the federal apparatus is so extreme. And the dysfunction, that most of the most positive and progressive political action is happening at the local and the regional level. Now communities are getting connected horizontally, and I would predict over the next bunch of years that that is going to continue at a much higher pace. In fact, it's starting to globalize, to become international.... It's a very different leadership model, of not looking for a messiah or a leader; it's a much more decentralized sense of leadership, and a much more personally empowered sense of leadership.

The film looks at consumerism and the environment, and given that young adults are a target of the film and big consumers, how can they make a difference?

Conners: People don't really derive a lot of happiness from consumption, really. The idea that we're telling our kids, that you'll be happy because you're consuming, is a lie. The idea that being a good citizen, having friends, living in communities--that's where humans really derive happiness. Yes, consumption is okay. It's not like we're saying you can't consume at all. Of course, we identify with objects and we support that. What we're saying is that consumption has gotten totally out of whack....

So, I think you have this movement, which has a lot of heroes... and they're doing meaningful work. There are a lot of young people who have seen this film and the word-of-mouth screenings. What's so exciting is to see 19-, 18-year-olds come up with their eyes completely open and going, "What can I do to help? This is so exciting to me. I'm going to tell all my friends to see it because it's given us a purpose."
DiCaprio: It's a very difficult problem, too, because you know, in reality, how are we going to actually make people stop consuming? That's not the point of the movie.

The point, in essence, is, wouldn't it be great to live in a world where we wouldn't have to think about these kinds of things? Where the powers that be, the corporations that manufacture these items, our government were powered by solar and wind, and we had alternate energy resources, and this was just sort of integrated into our every day lives.

In essence, when we talk about voting with your dollar, yes, every time you do buy something you are advocating the way that company does business. And by buying a hybrid car or buying something organic or green, you're essentially making them create more for a marketplace out there, and that will eventually grow.

You have spoken about personal responsibility, so what do each of you do to live green?

Petersen: We were able to get a Prius, so my family has two of them. I walk to work now. We buy only organic. There's no chemicals in our house. Our office, we don't have the lights on. We use recycled paper, we compost. I'm [growing] food in the backyard, blah, blah, blah.

But then, okay, so how do you take it to the next level? This is the thing. No one's perfect. We're trying. We live in a society that's certainly not green. You have to use gas sometimes and whatever. But my new commitment is this [she shows a large re-usable water bottle]. Americans throw away 2.5 million plastic bottles an hour. An hour! And I thought, okay, I can't drink [Fiji] water anymore. It's my favorite water. I'm really bummed out. So filtered water in this.

DiCaprio: I've been driving a hybrid car for five, six years now. My house is built green. I have solar panels on my house. I do most of the stuff that she [Petersen] does except walk to work. Oh, and I don't have a compost pile on my house.

But I try to live by example as well. At the end of the day, I keep urging this and I think this is the new thing that I'm trying to get across here: I don't think the environmentalists or the environmental movement is about telling people how to live, no matter what financial background they come from. Because not everyone can put solar panels on their house. It's just not a reality. But it is about just being aware of these global forces that are out there. And being aware in the next election, asking the right questions about what the next candidate's environmental policy is, and voting with your dollar. Being aware of these issues, I think that's the main thing.

Of course, personal action is very important. It's important to lead by example. But until the powers that be truly... infuse this into our daily--way of living--I don't think anything's really going to change on a massive level.

Conners: They've said it. I don't have a Prius, and I don't have solar panels. I would like to have them--and that will come. But what we've been talking about is that a change of heart is free and a change of consciousness is free. And there's an untold number of inventions and changes in personal actions that can happen from that.

Personally, for me, my greatest contribution, at least in my little circle, in my world, has been making this film. Because what I have learned going through this process, and how I've gotten educated, has completely changed me and, by proxy, the people that I'm around every day. So, there is a lot to be said about getting educated and learning what the reality of the world is.

Which is an important point, because class really plays a huge role in this, and financial access. And the real point is: We need to change the society. But we don't all have a choice. If you have to get on airplanes, which I have to do for the work that I do, I don't have a choice about that. So technology is legislation, and we don't get to vote on it. The point is: We have to change the society at that level.

Also to make this financially accessible to middle income and lower income people, at large. Food stamps can be used at farmers markets now. There's a whole host of very pragmatic things that we can do.

To ultimately create a kind of a green deal, a Green New Deal, that it's a huge jobs creation program that puts people into a green economy--this is what's called "green collar justice" now. And we don't have to travel far to see horrific scenes of inequity in this country. Witness [Hurricane] Katrina and everything else. So, I think that there's a much larger political issue at that level.

Taking responsibility for our own place is tremendously important. That's how a lot of the change is going to happen. It can seem overwhelming when you look at the global situation. But when you drill down to the local, it's a lot more doable.