'When the Levees Broke' 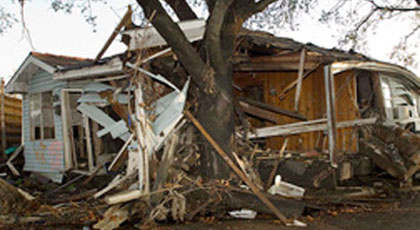 The funeral parade makes its way down the battered, hurricane-ravaged street, its modest assemblage of musicians and marchers ushering out the old and welcoming the new. A true second-line funeral, except here the dead being honored and celebrated isn’t flesh and blood, or at least not merely flesh-and-blood. The marchers mourn not only the dead but the dying city they once inhabited--the beautiful, historic, oh-so-fragile city of New Orleans.

Whether or not the city is able to recover from Hurricane Katrina is beyond the purview of Spike Lee’s documentary. Instead, Lee dedicates himself to the task he has quietly taken on, in the absence of any other interested parties: recording our nation’s contemporary history. Anyone who has seen Lee’s Oscar-nominated documentary "4 Little Girls," or his inflammatory short on the 2000 presidential election, “We Wuz Robbed,” knows that Lee is no impartial observer. He is who he is: brash, brilliant, an outspoken liberal, a black man.

"When the Levees Broke" is a documentary of Hurricane Katrina and its aftermath, but what Lee is able to offer that so much other coverage of the tragedy was largely unable to do was to provide a sense of the lives of New Orleanians: their concerns, their beliefs, their suffering, and above all, their voices. Haunted by the possibility that a great American city, and a great African-American city, might be no more, Lee throws a combined funeral and celebration for New Orleans, one ruled, above all, by the sound of its residents--their words and their music. .