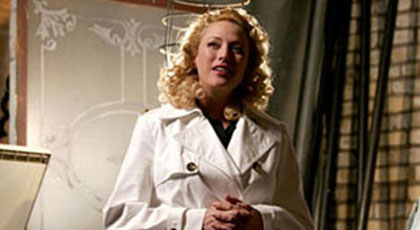 All the roles nominated for "Best Spiritual Performance" can be described as inspirational, but only Virginia Madsen's Asphodel can claim to be literally "spiritual": She's an angel.

We don't know that at first. Guy Noir (Kevin Kline) encounters her backstage at the Prairie Home Companion broadcast, and describes her in a series of metaphors: "She gave me a smile so sweet, you could have poured it on your pancakes. She was in a white trench coat, so white that rain would be embarrassed to fall on it."

But the woman in white is not an ordinary fan of the show. As Asphodel explains to Garrison Keillor later on, she died while listening to the show. As she drove up a winding mountain road, she began laughing at a joke--and her car swerved out of control. To top it off, in retrospect the joke doesn't even seem that funny.

Madsen's character describes her vocation this way: "I comfort people that are deeply sad… One time, I put the face of the Lord on a bowl of oatmeal. Just to cheer people up, those kinds of things. But mostly I take people up to see God."

There's a lot to critique in that estimation of what angels do and are, but it fits the tone of gentle absurdity that reigns throughout the film. Madsen avoids the temptation to humanize Asphodel by making her cute and bumbling, as well as the opposite temptation to go all sparkly and ethereal. Her Asphodel is just what "Prairie Home Companion" needed: a bass line, strong, unpretentious, and quietly gracious.

"A Prairie Home Companion" was an uneven mix of humor and pathos, and Virginia Madsen's odd performance as an angel of death certainly detracted from whatever inspiration might be found in this quirky tale about the cast of an old-fashioned radio show. While portrayals of angels in the movies have ranged from comedic ("Michael") to tragic ("Wings of Desire") to campy melodramatic ("Meet Joe Black'), Madsen's performance doesn't lend itself to any of these formulas--which would be fine, except that Madsen makes being an angel seem like it is nothing but a snoozefest.

While Madsen is supposed to be a supernatural guide who is ostensibly attending the final broadcast of the show for the purpose of aiding one of the cast members when he passes away, what she really does most of the time is wander around the backstage area wearing a white trench coat. She poses in corners, she hovers over peoples' shoulders, but what she doesn't do is inspire. She utters platitudes about truth and love in a monotone, her face expressionless. She establishes no real emotional connection with those she encounters. They neither fear her unexpected presence nor seem to be truly comforted by her words of wisdom. Such an angel makes the promise of an afterlife seem drab in comparison to the spirituality we find in the rollicking hymns the Johnson sisters are singing onstage.

I understand that one of the purposes of Madsen's angel in this story is to symbolize the different yet inevitable ways death comes into all of our lives--but would it have hurt to find an angel who could tell a joke or perform a little miracle or two? That's the kind of companion I am hoping for when I have to take that final journey to the other side.