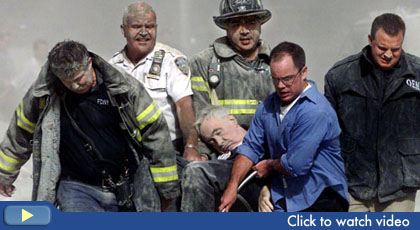 This profoundly moving feature-length documentary tells the story of a New Yorker who lived and died for the people and the city he loved. The young Robert Emmet Judge, who wanted to be a priest from an early age, became the first official casualty of the attack on the World Trade Center on September 11, 2001. The photo of firefighters carrying his body to St. Peter’s Church has become an icon.

As a Franciscan Father, Mychal Judge (he changed his first name when he professed vows as a Franciscan) served as chaplain to the New York City Fire Department, the homeless, and to people dying of AIDS. He dropped everything when he heard the news on the morning of Sept. 11, donning his firefighting gear and making his way to lower Manhattan on that devastating morning to assist in any way he could. This charming priest of Irish descent died while he blessed the dying. It was the 23rd anniversary of his sobriety. A recovering alcoholic, he suffered from depression and fear. Father Mychal was also gay, something he told only his nearest friends and confidents, for he did not want this to get in the way of his ministry to bring Christ to everyone he met.

Narrated by Sir Ian McKellan and full of interviews with his friends, Fr.

Mychal’s own words tell much of the story. We come to understand why his friends said, “He loved the hell out of us.” Father Judge struggled like all of us and found a remedy for the times he was at his lowest. Then he would tell people, “Be about the people you love and put your own needs second.”

Seldom has a documentary revealed so much about a person like us who was so human--and so holy.