'The Pursuit of Happyness' 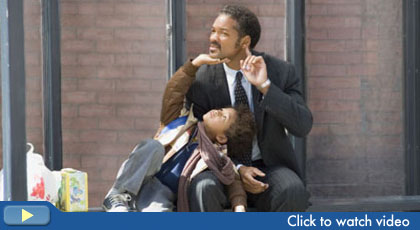 For this year's Best Spiritual Film contest, the Beliefnet community chose Will Smith's popular inspirational movie "Pursuit of Happyness" over second-place winner "The Nativity Story." Interestingly, our panel of judges chose a much darker tale as their winner: "Children of Men," which has quite a different feel and outlook than "Happyness."

All faith traditions impart spiritual truths and theological ideas in the form of stories about ordinary folks. In many ways, "The Pursuit of Happyness" fits well into this mold. It's the true story of Christopher Gardner, a moral, hard-working American who loses his tenuous hold on his business investment, his apartment, and his financial future. His only hope for the future appears as a non-paying internship at Dean Witter, from which only one intern will be offered a job. Complicating matters is that Christopher has a preschool-aged son whom he must feed, clothe, and keep physically, emotionally and morally safe on the mean streets of San Francisco.

The strength of the film is that it doesn't preach, it simply takes you along on the harrowing voyage from middle class to the working homeless, where missing the cutoff at the local shelter means barricading yourself and your child in the subway restroom for the night, and an employer's breezy request to borrow five bucks ensures you have no supper.

Like all well-told stories, its strength is its resonance with those who see it. Night after night when Christopher (played by a gaunt and compelling Will Smith) and his little boy wait in line to see if they have a place in the shelter of Glide Memorial Church, I wanted to say, "Why doesn't someone DO something? Why doesn't someone find out who's in line and how easy it would be to help them?"--and that questioning is the first step of engaging the spirit. (The second, of course, is when you realize that "someone" should likely be you.)

My own background is Christian, and from the amount of sermon/editorial time no doubt devoted to last year's "Brokeback Mountain," it would be easy to think that Jesus spent a lot of time talking about homosexuality--while in fact, he said nothing about it. However, Jesus had quite a lot to say about the poor; in fact, he wouldn't stop talking about the poor, saying that our spiritual fitness could be seen in how we treated them. In America, we've made ourselves comfortable by conflating poverty with laziness, therefore allowing ourselves to ignore it. "The Pursuit of Happyness" goes a long way toward correcting this theological inaccuracy, and toward leading all of us to a "poverty of the spirit," which is the beginning of wisdom on every spiritual path.

Though "The Pursuit of Happyness" was entertaining and intermittently inspiring, it would be impossible to comment on the film's implied without pointing out nonsensicalities that made me want to leave the theater before half an hour had passed.

First there's the Rubiks cube. Every single person in San Francisco--CEOs, news anchors, cab drivers--carries one and works it constantly. Gardner scores an interview because of his Rubiks abilities. He wins an internship because, despite his rag-tag appearance, he cracks a good joke. He ends up living the American dream after suffering every misfortune Hollywood can cram into a film: hit by a car, arrested, robbed, and abandoned by his wife. In this last event the film is particularly disinterested, as the wife character is as brittle and one-dimensionally bitchy as possible. And why does Smith have to keep reminding us that happiness is spelled not with a 'Y' but with an 'I'? Once would have been enough, I think.

To its credit, "Pursuit" does introduce audiences to an extraordinary man, and the ultimate message--hard work and determination pays off--is laudable. Faith is depicted on the fringes, as Smith and his real-life son Jaden (who has inherited his father's charisma; both leads are engaging) spend nights in a church shelter, and spiritual music is on the soundtrack. But in comparison to, say, "Children of Men"--which drops so many references to the birth of Christ, I'd cry overkill if it wasn't one of the best films of the year--the content in "The Pursuit if Happyness" seems slim.