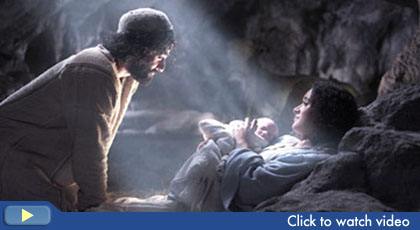 "The Nativity" is the most authentic and real movie yet made about the birth of the One who is the source of all spirituality. Further, it brings to life a mostly-Biblical picture of Mary, the mother of Jesus, and many of the other characters who have (for many, especially young people) yet to jump off the pages of the Bible or the flannel board.

"The Nativity" is neither the over-the-top depiction of holier-than-thou caricatures nor the cheesy over-evangelism of Christian media. Much of the film is more understated and muted than the typical church Christmas celebration and may challenge some of the pedestal-ized notions we have of the Biblical characters. It makes the drama of the day real, and the miracle of Jesus' humanity and deity come to light. Where "The Passion of the Christ" focused on Jesus' character, "The Nativity" focuses us on his identity.

In our day of respect for different spiritual paths, it's still important to remember that almost all of them circle back to the search for who God is, how He is relevant in our lives and what our response can be to experience spiritual power in our lives. "The Nativity" takes us there, without telling us where (or if) to go to church.

The story of birth of Christ is at once both a sweeping historical epic and a tender, divinely appointed love story, which is exactly what makes the tale such a challenge to bring to the big screen. It's an almost unrealistic task to try to fit years of religious persecution, wise men, shepherds, prophetic angels, and an virgin birth into a coherent two-hour film, which is exactly why "The Nativity Story" fails as a spiritual cinematic tour-de-force. Instead, is simply a messy, mostly accurate, hodge-podge retelling of a miraculous moment in time.

While I agree with other critics that by far the best moments of the movie are the touching moments between Mary and Joseph on the road to Bethlehem, there were certainly far more times in this arranged marriage that could have been deeply and beautifully explored beyond the bits and pieces we witness on the screen.

On the other hand, the historical perspective of this film fails as well. I wasn't looking for the blood and guts of "The Passion of the Christ," and the movie certainly never made me believe that Herod's murderous search for the Messiah ever put Mary and Joseph in any grave danger. Maybe that's partly because the wise men were portrayed something like the Three Stooges and Herod was a one-dimensional cartoon style villain.

In the end, I realize that "The Nativity" may be a family friendly, Christmas-pageant kind of treatment of the Christ's birth, which some Christians find comforting. However, I think declaring this movie to be one of the most inspirational of the year would be another example of telling Hollywood that, as an audience, Christians will continue to settle for mediocre, safe storytelling instead of demanding deeper, richer stories that shed new light on our humanity and our faith.

Historical Authenticity & Deep Spirituality
More than most, this movie must address the widely varying expectations of its audience. Some will come to it hoping to see their own very precisely imagined versions of the Nativity story brought to life. Some will come to it as worship; others will come for drama, or history, or curiosity.

I came to the movie open to, or at least respectful of, all of these expectations, but with few of my own as well. I was twice removed from becoming very involved in the story, first because of my obligation to be objective as a journalist and a critic, and second because I am not very knowledgeable about the Nativity story and do not believe in the divinity of Jesus because I am Jewish. Even so, I was very moved by the deeply spiritual nature of the film and by the story, which is, after all, the story of a very young Jewish couple who must respond to the most extraordinary set of events imaginable.

I liked the authentic feel of the historical detail. Oscar Isaacs, who plays Joseph, told me in an interview that there were two keys to playing Joseph. First were the hands. Isaacs said he spent a month using Biblical-era tools to build the house that Joseph builds for Mary. He wanted to look at his hands and see Joseph's calluses. Second was the sole word the New Testament uses to describe Joseph, "righteous." "Being righteous in that case does not mean following the law," he told me, "It means love and humility and faith. He's in love with Mary ,and he believes in her. Where does it come from, that selfless, humble, love? The most amazing act of humility is the essence of the story, how God made himself flesh in the most humble of ways with the most humble people. Jesus was not born to kings or to wealthy people but to Mary and Joseph, poor but righteous." This is the part of the story I found very touching and powerful.

Faithful, but Failing to Challenge
New Line Cinema offered viewers something unseen since the fifties. "The Nativity Story" echoes the biblical epics that once ruled the big screen. It includes beautiful vistas and a stirring soundtrack. "The Nativity Story" faithfully recounts the first Christmas, from Mary's encounter with an angel through the arduous journey to a stable in Bethlehem. Director Catherine Hardwicke demonstrates her mastery of production design, via lavish recreations of Mary's village and first century Jewish life. The international cast, led by New Zealand's Keisha Castle-Hughes keeps "The Nativity Story" from falling into white washed depictions of a Middle Eastern setting.

Yet, audiences responded with comparative indifference. Perhaps the filmmakers' commitment to a respectful story drained both controversy and enthusiasm from "The Nativity Story." We go to movies to experience far away places and unimagined dangers. But the edges of "The Nativity Story" were so softened that it resembled a greeting card rather than genuine human drama. Sainthood can only be portrayed in contrast to real threats and considerable evil. The baby Jesus never felt endangered. The Virgin Mary came across as more resigned than troubled.

Cecil B. DeMille always gave filmgoers a taste of sin and salvation. His epics titillated before they inspired. "The Nativity Story" takes the high road, never falling for the cheap thrill. While religious filmgoers claim they want their faith respected, the box office disappointment accompanying "The Nativity Story" suggests they'd rather have their faith challenged, then affirmed.

"The Nativity Story" offers a glimpse of Joseph's dilemma. It suggests how much confusion may have blinded Zechariah or Joseph prior to the birth of their sons. But lest the pioneers of the faith come off as all too human, "The Nativity Story" stops short of putting flesh and blood choices upon the founders of the Christian faith. Yet, isn't that what the Incarnation is all about: God with us, even in our brokenness?