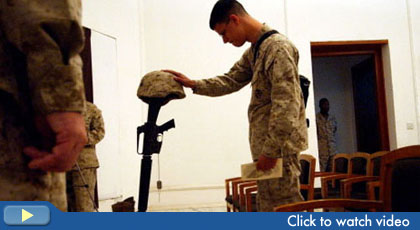 "The Ground Truth: After the Killing Ends" opens with sober images in black and white: a dead civilian, soldiers wielding guns. As brief (78 minutes) as it is harrowing, this Iraq war documentary, which was produced and directed by Patricia Foulkrod and features interviews with soldiers and their families, is in many ways a reiteration of what anyone who watches war movies and the nightly news knows. Training breaks soldiers down; war takes a devastating toll that goes beyond visual scars.

But what you won't get from, say, "Platoon" or CNN is here as well. "The Ground Truth" is an apt title, and Foulkrod never attempts to dramatize material that needs nothing extraneous. She presents, clearly and truthfully, an interview with a badly injured soldier. "When you hear about injuries," he remarks, "you don't realize they lost their legs." She interviews the family of a 23-year-old who couldn't cope with post-traumatic stress and hung himself in his basement. A medal-winning soldier describes violent bouts and jail time following service in Iraq, and lieutenants who look like they're 12 years old talk about deceptive recruiters who told them their chances of service overseas were slim.

I am surprised most by a chant the soldiers sing during their daily drills. Trainees, many barely out of high school, are taught to sing about killing women and children with such frequency that the act itself is second nature. Anti-war without being anti-patriotic, at its best, "The Ground Truth" is an exploration of what turns a citizen into a killer, and of the psychological aftermath that follows.