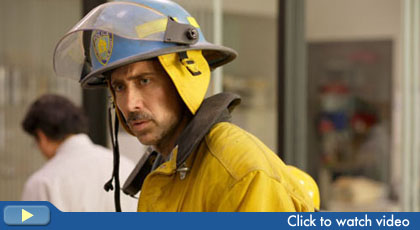 I would never have predicted that I would choose scenery-chewing, eccentric actor Nicolas Cage for one of the most inspiring performances of the year, but his turn as Sgt. John McLoughlin was understated yet deeply moving. McLoughlin is not portrayed as a hero, but as an ordinary man who is simply doing his job when he is thrust into a horrific situation. As a New York Port Authority police officer, he is not much different than any of the rest of us--he checks on his kids before going to work and worries about the kitchen remodel his wife wants--yet when he and two other workers become trapped in mounds of rubble beneath one of the towers, he learns to draw on strength and courage in ways he never imagined.

The fact that Cage portrays McLoughlin for most of the movie as buried alive makes his performance even more emotional riveting. Cage portrays McLoughlin as a man in severe physical pain--his legs are crushed--yet he still finds a way to keep his co-worker Will Jimeno's spirits high without letting on that he, too, is afraid they won't get out alive. And yes, there is a moment of authentic faith, as McLoughlin, in a particularly grave moment, shouts out the Lord's Prayer.

Cage's portrayal of McLoughlin is the kind of reminder we all need from time to time that, truly, any one of us, with help from God, can--and should--respond to tragedy and despair with bravery and compassion.

I can't imagine a task more difficult or daunting than playing a real-life hero less than five years after his near-death, especially in as public a tragedy as Sept. 11. As John McLoughlin, the Port Authority worker who was buried under the World Trade Center rubble, Nicholas Cage turns in a performance that's both painstaking and brave. But once the towers are down and the movie goes into full gear, Cage can't do much more than moan.

He also doesn't have a leading role. "World Trade Center" is an ensemble film, and the real heart lies in the family drama that unfolds in the suburbs, as the wives and children of McLoughlin and Will Jimeno (an equally impressive Michael Pena) hear and respond to the news. Cage might be buried under literal loads of rubble, but Maria Bello and Maggie Gyllenhaal, playing the wives, carry the movie's emotional baggage, turning in nuanced performances that make the events of 9/11 personal.

In contrast, the scenes that show Cage trapped beneath the fallen towers have a static quality that frequently borders on tedium. And while his acting chops are on full display in the film's first act, he can't quite recover from silly, sappy hallucination sequences, including a vision of Jesus with a water bottle. That's the strongest spiritual reference in the film, and onscreen it doesn't work.