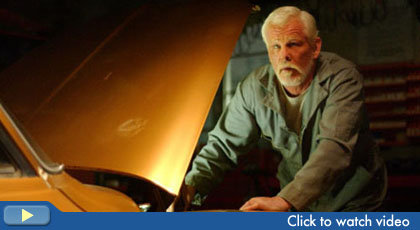 Based upon the writings of Dan Millman, "Peaceful Warrior" traces the spiritual transformation of a cocky gymnast into a centered athlete. Dan's considerable prowess in the gym and with the ladies suffers a substantial hit when he is injured. A scruffy but wise gas station attendant named Socrates (Nick Nolte) leads Dan on a journey from self-destruction to self-awareness. Socrates offers sage advice and aphorisms that echo Sun Tzu's "The Art of War." Dan must realize how self-sabotage has robbed him of his true potential.

"Peaceful Warrior" is a film about personal rebirth. How appropriate that a movie star of Nick Nolte's magnitude (and infamy) would inhabit the role of Socrates. Nolte's gruff voice and world weary appearance suggest hard living and questionable choices. His Socrates was not born enlightened, but arrived there via regrettable mistakes and a commitment to change. Nolte's character is an unabashed font of wisdom, not pushing anything upon Dan, but waiting for the student to seek out the master. Nolte offers an advanced class in metaphysics (and acting).

The director of "Peaceful Warrior," Victor Salva, also knows plenty about second chances. Dogged by a 1988 conviction for molesting a 12-year-old boy, Salva has continued to polish his craft, making movies on the long road to recovery. "Peaceful Warrior" represents a story of starting over that Salva continues to live.

Some may find the New Age wisdom of "Peaceful Warrior" too fuzzy for their tastes. It has moments that rely a little too heavily upon movie magic. But "Peaceful Warrior" also offers a tale of retraining and success comparable to "The Karate Kid." Dan must learn to master his inner demons before he can truly compete on an international level. His life lessons transcend the gym or the garage. They can be applied today.

My mind began to wander as this film trudged on, until I came up with a way to make it more interesting. I realized that if I thought of it not as an inspirational spiritual film but a horror film, it made more sense. Our hero, an arrogant, headstrong champion gymnast (likeable Scott Mechlowicz as author Dan Millman) sees the shambling man who will become his mentor standing quietly on the roof of a dilapidated "service" station. Played by Nick Nolte, the man then appears standing on the floor next to Millman. This was supposed to be mysterious and inspiring, but it struck me more as ominous (in "The Grudge" mode) or just silly. And the artificial and portentous fortune-cookie aphorisms worked a lot better if they were intended to be warnings, which, at least in horror movies, get the benefit of the doubt when they are opaque. The mentor, nicknamed "Socrates" tells Millman to run up a mountain, where he will find something important. "Oh, don't let it be that it's about the journey," the critic next to me moaned. It was.

No one can argue with the message from "Socrates." It is about the journey. Letting go of the anger that fuels ambition and competition can open us up to a deeper source of strength and inspiration. I'm glad Millman was able to come back from a devastating injury. But the cheese factor in this film is so high and the sincerity factor so low that it never feels authentic or meaningful.

Perhaps that's because, at the end of the film, all of the "spiritual" guidance was in aid of nothing more than an athletic competition. The sports/inspiration movies that endure, from "Rocky" to "Chariots of Fire" to "The Karate Kid" use sports as a metaphor for some spiritual--yes--journey, some path to redemption and true greatness of spirit. In this film, all those Yoda-isms from "Socrates" are in aid of nothing more than making a superficial guy pretend to think less about himself so that he can achieve the very same kinds of superficial goals he had before all of these great lessons. "Socrates" is not the kind of mentor who inspires his students to, say, help other people.

The movie's tagline is "there are no ordinary moments." Perhaps, but there are certainly mind-numbingly ordinary movies, and this is one of them.

A Model Spiritual Teacher
Nick Nolte as Socrates in "The Peaceful Warrior" is a good model of a spiritual teacher. Dan Millman is a driven gymnast who dreams of going to the Olympics. One night he notices that a garage mechanic has made a 12-foot vertical leap onto a roof. Thinking the man can teach him something he can use in the gym, he asks him to be his teacher. Dan calls the mechanic Socrates because he spouts spiritual aphorisms. For example, when asked why he's working in a gas station, Socrates replies: "This is a service station; there is no higher purpose than service."

But it's not what Socrates says but how he trains Dan that makes this a standout spiritual performance. Socrates observes that Dan's mind is filled with a barrage of thoughts and emotions that keep him in a constant state of agitation. He shows him how to "take out the trash" and be totally in the present moment (he pushes him off into a river!) When Dan boasts about how this new skill has helped him in a gymnastics performance, Socrates refuses to join his ego parade.

Dan may practice in the gym, but Socrates practices in all parts of his life, another sign of a good spiritual teacher. While out one evening, they are robbed by three thieves who walk away with more loot than they expected, as the teacher demonstrates the practice of generosity.

In his book "A Rare and Precious Thing" about working with a spiritual teacher, John Kain says, "It is the spiritual teacher's job to offer new ways of seeing.... The spiritual teacher-student relationship is an alchemical process." This doesn't happen quickly. Dan learns that a spiritual regimen requires surrender, discipline, a taming of the ego, and a polishing of the heart. Socrates pushes him to change and in the end, lets him discover the most important lesson of all for himself.

A Mixed Verdict
Nick Nolte's "Socrates" is neither an over-the-top inspiration nor bottom-of-the-barrel disappointment, which doesn't translate into much at the box office or at awards shows, but it warrants notice for a Beliefnet Film Award. Here is why.

In real life, spiritual experiences aren't always pretty or beautiful as movie performances can make them out to be. Seasons of growth are often gritty, occasionally grimy, and frequently more complex than a two-hour movie can capture. Nolte's well-worn Socrates seems to have experienced such a road, which sets up the film's power far more than the script's well-worn New-Age-self-help messages, which he's forced to recite.

Athletic, rich, talented and popular, "Dan Millman" reaches out to Socrates for help in attaining his dream of Olympic gold, but instead finds himself on a journey he'd have never asked for. By going through a season of brokenness, he emerges with a new perception of reality and a new outlook on life. Traditional Christians may find the "The Peaceful Warrior's" philosophy distasteful--and secular audiences will recognize the tired 1980's-ish self-worth messages on which it's based--but the nature of the story is one that any spiritual person can't overlook: Brokenness and the willingness to part with current life supports are often the next steps towards a deeper spiritual experience, and the source of information (in this case, "Socrates") doesn't always provide the answers according to our beckoning. But Nolte is likeable--and believable--enough for us (and "Millman") to trust him.