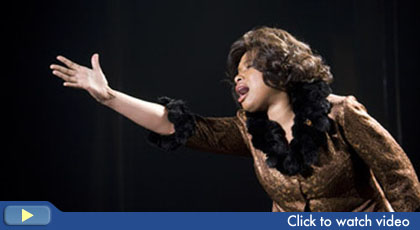 Everyone loves a comeback story, and our judges are no exception. They chose Jennifer Hudson's breakout performance in "Dreamgirls" as the Best Spiritual Performance of the year. Our community members chose another redemption story, that of Will Smith in "The Pursuit of Happyness," as their winner in the category. Smith had come in second in the judges' voting, with Hudson edging him out by the tiniest of margins.

What makes a performance spiritual? Is it because a character says her prayers or goes to church? Or is it because, as Sister Wendy Beckett says about the difference between the religious and spiritual in art, “the higher honor is always accorded to spiritual” for it is that to which all works of art aspire. It is “what makes the encounter with such a work a life-enhancing moment” ("Joy Lasts: On the Spiritual in Art," 2006, J.P. Getty Museum, Los Angeles).

Jennifer Hudson’s breakout acting and singing performance in "Dreamgirls" inspires and uplifts because she inhabits her character, Effie, who is meant to remind us of Florence Ballard, the front singer for the Supremes who was replaced by Diana Ross. Ballard died poor and alone at the age of 32. But not Hudson’s Effie. She never flinches in front of the camera or the microphone; she is full-bodied and full-voiced and she gives everything she has to a dream of making a living with her talent. She refuses to become a commodity, and yet she is willing to change and adapt when she must, without selling out.

Although everyone is talking about her rendition of “And I Am Telling You I’m Not Going,” the song that really shows how spiritual growth can emerge from deep pathos is “I Am Changing.” This is the moment when she leaves the dubious comfort of bitterness behind and courageously steps into maturity and freedom, embracing life and leaving dreamland forever.

"Dreamgirls" is a wonderful film, and Jennifer Hudson's soulful voice and powerful singing make for an dynamic movie-going experience. The songs "And I'm Telling You I'm Not Going" and "I Am Changing" are worth having on I-Tunes, along with the three other Oscar-nominated songs. And if musical performance alone were being measured, this would be worthy as a Beliefnet Film Award winner.

The script gives Hudson's Effie White a generous amount of singing moments which are as inspiring as they are enjoyable. But a spiritual role has to be more than an inspiring caricature, which is unfortunately the limit of Effie's character. The story's depiction of the pre-Civil-Rights era is important for today's young people, and the expose of the music business is enlightening though not necessarily new. Effie's lot as a gifted singer overlooked by the realities of the music industry and the ambitions of its would-be power players garners sympathy, and her victory over it brings Hollywood happiness (and maybe even Oscar success) but not the kind of spiritual depth or reality that would have made it unique.

"Dreamgirls" is a worthy noteworthy film, but it's power is in its music and its historical background, reflective of the Broadway show it came from. It just didn't have enough room to develop its characters, including Effie White.