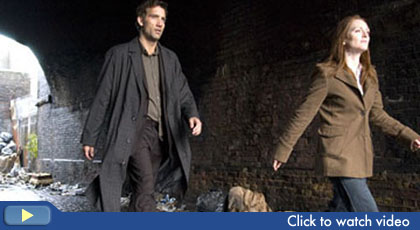 There was little agreement between our judges and Beliefnet readers this year. In a close vote, our panelists chose "Children of Men" as the Best Spiritual Film of the year, while our community went for "Pursuit of Happyness." Both groups, however, concurred on one thing: "The Nativity Story" came in second for both groups, with both races very close.

There is a moment, close to the end of Alfonso Cuarón’s entrancing science-fiction/action-adventure/political film mashup "Children of Men," when much of the buried Christian sentiment of its unique nativity story comes rushing to the surface. In a world in which children can no longer be conceived, a young woman named Kee has mysteriously become pregnant. Desperately seeking to protect their infinitely precious cargo, the young woman and her newfound protector Theo (Clive Owen) look to smuggle themselves to the coast, and to a ship that may or may not be there, intended to take her to a shadowy group known as "The Human Project."

In a world whose alarm bell is the explosion of yet another terrorist bomb, and where television screens broadcast updates from Day 100 of the Siege of Seattle, any dubiousness about the savior qualities of "The Human Project" is already woven into the fabric of the story, too obvious to even point out. As Theo and Kee wend their way through a terrifying close-order battle zone--filmed by master cinematographer Emmanuel Lubezki in such close proximity to the action that blood drips onto the lens "Saving Private Ryan"-style--a crew of fighters notice Kee’s burden, and combat comes to an abrupt halt. Theo and Kee exit the apartment block that had been the site of the fighting, and the soldiers stand around the man, the woman, and the baby, with some crossing themselves and others muttering silent prayers to themselves.

The promise of a baby in a world that has lost the ability to imagine its future recalibrates a world long gone off its tracks. That it can only do so for the briefest of moments--long enough to raise titters among some viewers, but not long enough to spoil the film’s spell--is testament to its rigorous depiction of a world gone terribly wrong.

With "Children of Men," Alfonso Cuarón has created a gripping, harrowing dystopic thriller. Like Steven Spielberg in "War of the Worlds" and "Munich," Cuarón has captured the way we experience violence today (in sudden bursts of terror). He has critiqued the way we mourn (in mediated isolation) and pinpointed our problem with people in power (they don't care about us). He has made a film that deserves to be seen several times over and discussed in classrooms, barrooms and living rooms.

But Cuarón has not made a spiritual film. In fact, he has adamantly refused to explore the spiritual questions inherent in his story.

I'm not talking about the source material for "Children of Men," which is P.D. James' Christian fable "The Children of Men." Filmmakers who adapt material are under no obligation to retain the thematic concerns of the original. But again and again in his film, Cuarón neglects the broad religious and philosophical questions his story raises. Unlike his forbears in cinematic dystopia--Terry Gilliam, Stanley Kubrick, Ridley Scott, Spielberg--Cuarón seems uninterested in existential quandaries. Why are we here? What motivates our actions? Is this world all there is, or are we groping for something beyond ourselves?

Watching "Children of Men," one gets the feeling such questions are in the margins--and there they stay. The most Cuarón offers is easy tie-ins to religion: a savior in a womb, a hero named Theo, a hippie mystic. We see these religious symbols, but they are only ornamental. Again and again in "Children," Cuarón chooses the political over the religious. The imagery of his film--a reference to Abu Ghraib here, a nod to museum looting there--continually reminds us of our politics rather than encouraging us to consider broader implications.

I'm a fan of political cinema, and I'd not normally pick on a film for being unspiritual. But as impressive as "Children of Men" was, it's a movie of its time rather than a movie that tries to speak to all time.