'Beyond the Gates': Exclusive Clip

The film, opening March 9, depicts a real-life story of heroism during the Rwandan genocide. 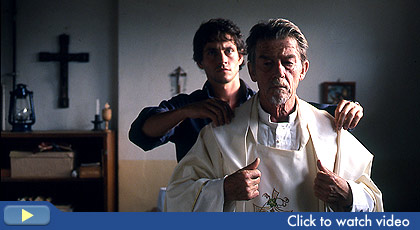 Based on true events and filmed in Rwanda with genocide survivors as cast and crew, "Beyond the Gates" tells the story of a secondary school in Kigali, Rwanda, called the Ecole Technique Officielle (ETO), which was used as a U.N. army base. In April 1994, the school became a refugee camp, with Belgian U.N. troops, school children, relief workers, and over 2,500 Tutsi citizens and their sympathizers taking refuge there against a raging genocide, while the Hutu militia, armed with machetes, clamored outside the school gates. Five days later, the U.N. troops withdrew from the school, taking the whites with them. Within hours, almost all of the Rwandans were dead.